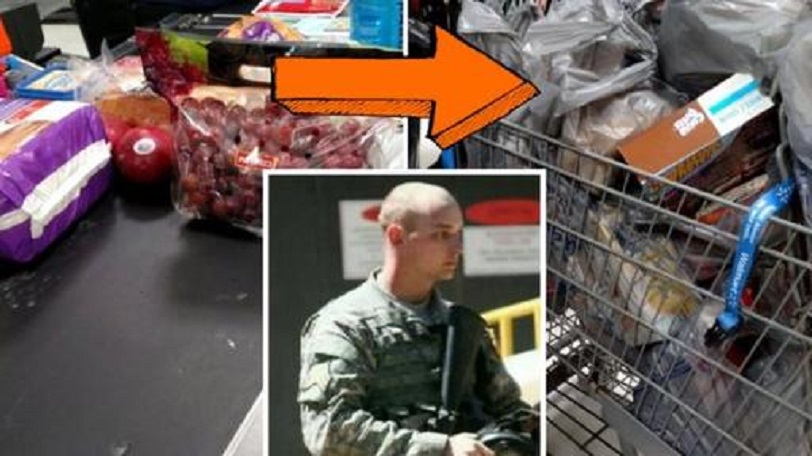 A military dad took one look at his cart and then the cart of the person next to him and was confused. Then, he figured out what was going on, and he became outraged. Now, the photo he took has gone viral. Was his anger justified? You decide.

Patrick Gibson, a soldier in the U.S. Army, stopped at his local grocery store to purchase a few food items and diapers for his family with the little bit of money left over from his paycheck. As he stood in line at the undisclosed Walmart location, he couldn’t help but noticed the two full carts of food the couple in front of him was buying.

When he saw how they paid for their purchase and what they did with it, he realized that there was something very, very wrong. That’s when he took to social media to vent his frustrations. Posting a collage consisting of two photos, he wrote, “The picture you see on the left is the amount of groceries including diapers that I was able to afford this pay period for my family,” which consist of his wife, son, daughter, and himself.

Explaining that he paid in cash and that he works hard to make a living and provide for his family, he continued, “The picture on the right is of the purchase in front of me in line. If you can’t tell in the picture there are 2 full buggies of groceries including such items like steak and some other very nice choices of food.” But, the problem wasn’t just what was in the cart.

“Here’s the kicker,” Gibson continued. “This purchase was made in food stamps.” But, it wasn’t just the fact that the couple whipped out an EBT card to pay an $800 grocery bill that really infuriated this father. Gibson says he wouldn’t have had a problem if it wasn’t for the fact he saw the person “move their big fold of cash out of the way” to get to the EBT card.

Making matters worse, the couple seemed perfectly capable of physical labor since Gibson watched as they then loaded their bounty into their carts before he spotted them in the parking lot, putting the heavy grocery bags into the back of a brand new Hyundai Genesis, a vehicle that Gibson says is worth about $15,000 to $20,000 more than his own car.

“I just thought I would take the time to tell this person/family that you are very welcome from all of us hard working/struggling to buy food Americans that have to foot the bill for your fancy steak feast while I skip breakfast and lunch every day [so] that way my wife and children have food to eat every day because $50-$75 dollars doesn’t go very far,” Gibson declared, obviously hoping the couple would see his post. “So, you enjoy your $800 free grocery purchase.”

Many people jumped on Gibson’s post to agree with his sentiments. “I agree with you Patrick 100%. There are a lot that really need it, but as you said, there are a lot that abuse the system and a lot like yourself that need them and can’t get them, especially you and your family,” one commenter wrote.

Similarly, many others expressed agreement that food stamps and welfare should only help support the bare necessities for those going through hard times and that the programs were never meant to be a lifestyle for those who prefer not to work. But, there were those who complained about the post, saying Gibson was being too hard on the family since there’s no way for him to know their whole story.

“Do you really know their backstory? Don’t be quick to judge someone because you’re angry. How do you know if that person works and their spouse doesn’t work because of problems? That all the money in their pocket is to pay their bills that the new car was a gift? How do you know that’s not the case?” one person questioned.

“Let’s just call it what it is,” Gibson responded. “We can all sit around and believe in sunshine and rainbows saying the old don’t judge a book by its cover crap, but the reality of it is that so so so many people are abusing the system that was put in place for struggling families. If we can’t even acknowledge that there is a problem, then how can it ever be corrected. And a brand new car as a gift? Really? If they have friends or family with money like that, then its a shame they still need $800 a month in food stamps.”

Indeed, we don’t know the entire story, but Patrick Gibson still makes a valid point. If this person has friends who are giving them a free car when they can’t afford food, that’s a problem in and of itself. But, if we are being honest with ourselves, we all know that it’s highly unlikely the brand new car was a gift.

Sadly, the reality is that there are plenty of stories about people abusing the welfare system which justify Gibson’s reaction. Most of them infuriate honest, hard-working Americans, so Gibson definitely isn’t alone in his sentiments. Abuse happens. It is a problem. If we don’t call it out when we see it, how do we expect anything to ever be done about it?