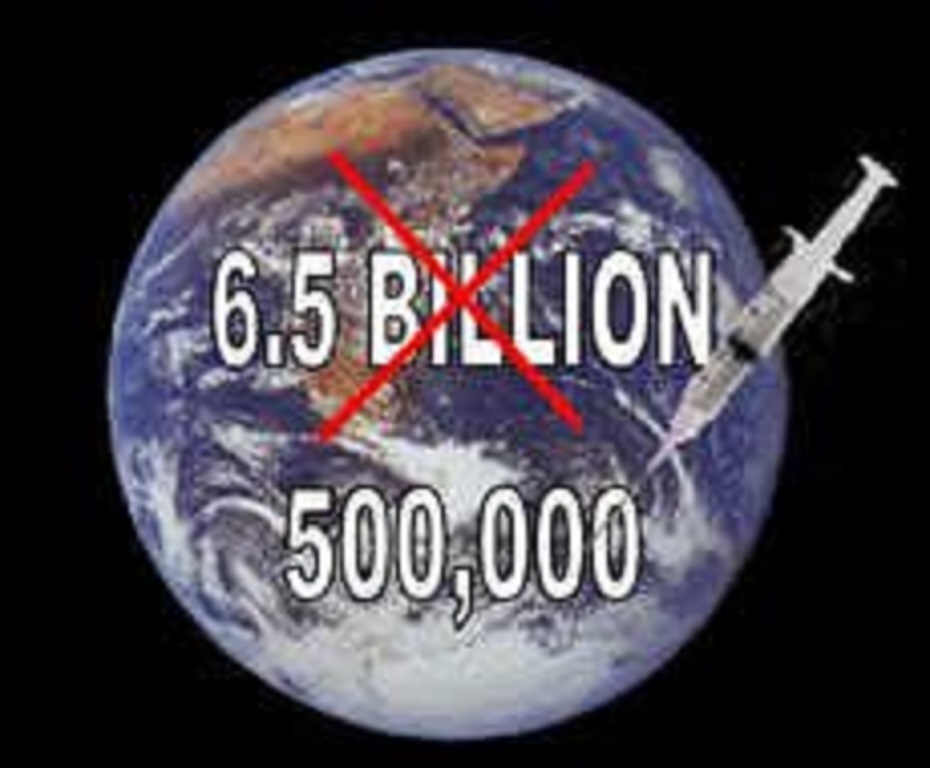 “I just wonder what it would be like to be reincarnated in an animal whose species had been so reduced in numbers than it was in danger of extinction. What would be its feelings toward the human species whose population explosion had denied it somewhere to exist…. I must confess that I am tempted to ask for reincarnation as a particularly deadly virus.” ~ Prince Philip, in his Forward to “If I Were an Animal” – United Kingdom, Robin Clark Ltd., 1986.

“The world today has 6.8 billion people…that’s headed up to about 9 billion. If we do a really great job on vaccines, health care, reproductive health services, we could lower that by perhaps 10 to 15 percent.” ~ Bill Gates

“Depopulation should be the highest priority of foreign policy towards the third world, because the US economy will require large and increasing amounts of minerals from abroad, especially from less developed countries” ~ Henry A. Kissinger“

The most merciful thing that the large family does to one of its infant members is to kill it.” ~ Margaret Sanger, Woman and the New Race, Chapter 5, “The Wickedness of Creating Large Families.” (1920)

Eugenics Is Alive and Well, and the “Covid-19” Scam is the Engine for Accomplishing Depopulation

“Eugenics is a social (and ‘scientific’) movement based on the belief that the genetic quality of the human race can be improved by the use of selective breeding, as well as other often morally criticized means to eliminate groups of people considered genetically inferior, while encouraging the growth of groups judged to be genetically superior.”

Makow- Let’s not kid ourselves. Communism, the NWO and the Great Reset are all Cabalist Jewish. They’ve enlisted a class of goyim traitors, Freemasons to do their bidding.)

Those that deny the mass eugenics efforts that exist in the U.S. and globally today, are either pathological liars, are censorship driven manipulative propagandists, or are completely ignorant of any reality whatsoever.

The entire transhuman, technological, and technocracy movements … are highly based on eugenics. The openly sought and planned “Great Reset” [is] the epitome of the modern eugenics movement. Due to the heinous nature and distasteful concept of this crusade … the terms used in the past have been altered to fool the collective and dumbed-down herd, and so far, that deception has been successful.

This fake pandemic is the first step to achieve human death and genetic alteration in order to eliminate and control millions or billions of common people, but the ever-changing reasoning for pursuing these agendas will soon morph into the excuses of sustainable development & ‘climate change.’

And given the planned destruction of the food supply that is already underway, and the intentional control and scarcity of energy, purposely-created food and energy shortages will be used to cause not only concern among the public, but to create sheer panic as well.

These staged events will be blamed for governmental controlled emergency rationing, and then certain segments of the public will be cursed for their excessive use of vital necessities during a ‘crisis.’

This is a double-edged sword, as without enough food and energy, the murder of large swaths of the population can be achieved under the guise of emergency efforts to protect the dependent population at the expense of those that have prepared for this type of critical situation.

This is the ultimate use of divisive propaganda by injecting a psychotic survival instinct into the minds of an already frightened populace in order to stifle empathy for others. These tactics are simply psychological warfare against the proletariat class as a whole.

‘Vaccination’ (injection of poisons), introduction of pathogens through testing, mind control, lockdowns, premeditated murder, sterilization, and fear mongering will… turn the tide in favor of the state by artificially altering human biology, by invasive psychological manipulation, by ever increasing draconian restrictions and mandates, and by state-sponsored terror at the hands of the enforcement… If the people do not stand up en masse against this assault, the situation as described above will almost certainly be the result.

By now, the purposeful elimination of some humans, the gene and mind-altering of others, and grand sterilization campaigns, especially in developing countries, should be seen as an obvious plot that is desired and in some respects, is already underway.

It is extremely difficult to consider that part of society that claims superiority over others to such an extent that they want to be able to decide who lives or dies, who is free or a slave, and who should be forcibly altered to be worthy of existence, as human beings. They are mere evil monsters.

The idea of eugenics never disappeared; it just faded into the shadows for a few decades. But today, it is once again being discussed more openly, although by another name.  The supporters of eugenics …are normally leftists, progressives, Postmodernists, neo-Marxists, globalists, or powerful politicians that are no longer hiding many of their views.

They include university professors, scientists, technocrats, ‘health’ organization and institution officials, and the alleged ‘elites’ and their tax-free foundations that are attempting to reset the world to their liking. Bill Gates for example, comes immediately to mind, but there are many, and these types hold powerful positions in the U.S. and all around the world….

In my opinion, higher death counts will occur as time passes, especially for those that take this … ‘vaccine.’ Months from now will tell the tale, and it won’t be a pretty picture.

The solution is total disobedience and dissent by the many. No one can make this happen except each individual, but the more that refuse to comply, the better chance we all have to survive this plotted war against humanity.

The Best of Gary D. Barnett