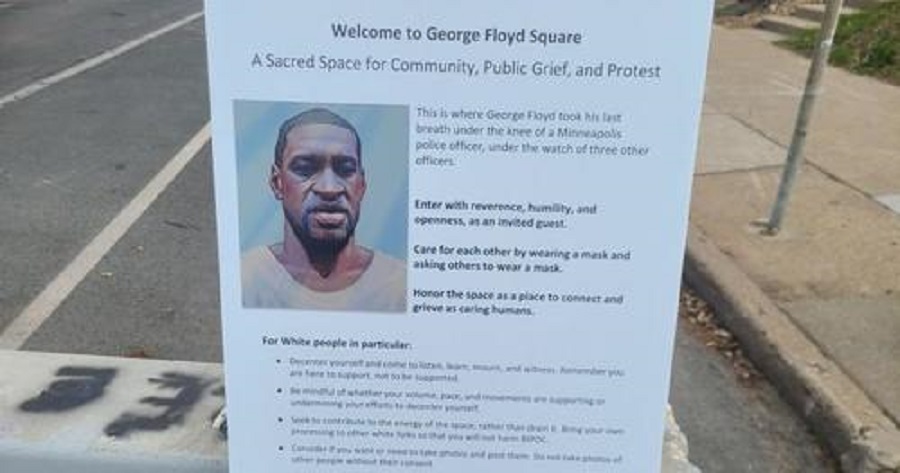 The ‘George Floyd Autonomous Zone’ in Minneapolis has issued a list of ‘rules for white people’ that they have to abide by in order to enter the area.

The zone has popped up around the area that Floyd died and has come to resemble something akin to a religious cult encampment.

Apparently, baptisms, miracles and other spiritual events can be witnessed on a regular basis.

However, entering the area as a white person comes with potential risks if you make the mistake of behaving in a “problematic” manner.

All visitors are asked to wear face masks and act with “humility,” but a lengthier list of rules for white people explains how they will be treated differently.

The rule sign to the George Floyd autonomous zone in Minneapolis has additional rules for white people. Since forming, the area has seen increased violence, criminal activity, drug abuse & even a murder. https://t.co/uifR9Y1GWn

Whites are asked to “decenter yourself,” which is a euphemism for a mandate to behave like second class citizens and keep quiet.

“Be mindful of whether your volume, pace and movements are supporting or undermining your efforts to decenter yourself,” states the advisory.

The patronizing tone continues with a demand to “contribute to the energy of the space, rather than drain it.”

The rules also state that white people should seriously consider whether taking photos is appropriate and to seek consent from anyone they photograph, despite the whole area being public.

The rules also encourage whites to intervene if they “witness white folks doing problematic things,” which presumably includes doing anything other than engaging in slavish worship for the 21st century deity that is George Floyd.

Black Lives Matter groups routinely issue demands of white people for their events, some of which enforce outright segregation.

As we highlighted last week, a group of Black Lives Matter protesters in Minneapolis were caught on camera telling a white liberal ally, “You’re white! You don’t belong!” before demanding that he leave the area.