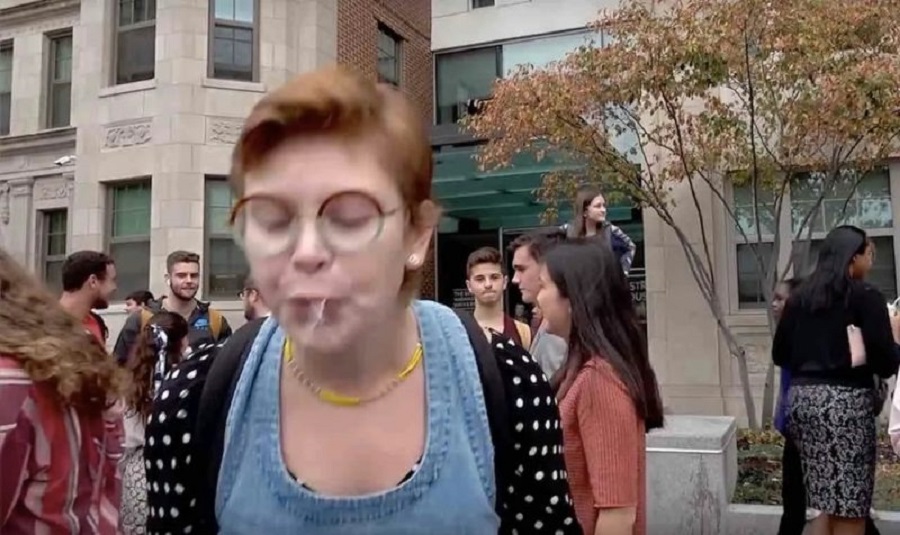 When violent abortion advocates descended upon a pro-life group, the mob began spitting and twerking as they argued for “women’s rights.” As things intensified, shouts of “Hail Satan” and “I eat baby lungs for breakfast” were heard — and it was all caught on video.

TFP Student Action, a pro-life group, set up a small display with brochures and bagpipes across the street from George Washington University in the nation’s capital. At first, things seemed relatively peaceful. Unfortunately, the calm wouldn’t last as a mob of violent pro-abortion protesters descended on the pro-life group, and it wasn’t long before complete pandemonium erupted.

Things first took a downhill turn when a flustered woman began arguing with one of the half-dozen Catholic pro-life activists. “It’s still a baby inside, but I have every single right to f***ing decide what I do with my own f***ing body!” she yelled, kicking off the chaos that was to come.

After the woman in the rainbow-colored sweater went on her tirade, others joined her, demanding TFP Student Action leave immediately and claiming the group had no right to be on the public sidewalk outside the private university. They were wrong, but that didn’t seem to matter. Determined to bully the pro-lifers into retreating, abortion advocates reportedly employed social media to rile up others.

After encouraging other like-minded individuals to come out and confront TFP’s members, who held a large banner that read “Pray & Act to End the Sin of Abortion,” it wasn’t long before the crowd swelled and a large gathering of abortion advocates moved in on the peaceful pro-life demonstration. As the few TFP members were quickly and vastly outnumbered, all hell broke loose — complete with calls to Satan.

“Hail Satan!” one abortion-supporting, counter-protester yelled during the frenzied response to the pro-life demonstrators, and another allegedly declared, “I eat baby lungs for breakfast!” One even admitted that she saw no problem with slaughtering 1,000 babies. “I’m in favor of slaughtering 1,000 babies if that helps already born babies have a better life,” the student said coldly, not showing an ounce of remorse.

Perhaps the most disturbing moment was when an angry woman took her disdain to the level of assault, spitting on a pro-lifer. Sadly, she wasn’t the only person in the mob to resort to a physical attack, according to TFP’s news release, which said three pro-life activists experienced some form of physical altercation with the counter-protesters.

In addition to having one of their members spit on, another TFP volunteer said he was kicked in the back of the leg and another said students repeatedly hit his arm after he told them he sprained his wrist, which was in a brace. As the crowd converged on TFP’s peaceful demonstration, the abortion advocates also danced, sang, and flipped off the pro-life group. Some threw liquids on the TFP members too.

Authorities were finally called, but campus police left quelling the mob up to the Washington, D.C., cops. A barrier was formed between the two groups, but it didn’t help much, according to the pro-lifers. “The mob showed neither respect for the police officers nor obeyed their orders,” TFP Student Action Director John Ritchie said. “They just continued screaming, ‘My body, my choice.’”

“One of them put a pro-abortion sign on our windshield, and others started spitting on the windows of our van,” Ritchie said, describing the “parting gifts” TFP members received from the angry mob. “If they don’t respect the most innocent lives of the unborn, do you really think you can trust pro-abortion activists to respect anyone?”

Police officers escorted the pro-life group to their vehicles for their protection, and the mob smelled victory but continued their attack. As the pro-life demonstrators retreated, abortion supporters followed them, screaming with delight, taunting them with jeers, and yelling obscene insults. One even twerked for the occasion, celebrating the silencing of others by throwing and thrusting her hips and shaking her buttocks after holding both of her middle fingers in the air:

“The mob was hellish,” the TFP Student Action leader said. “They refused to acknowledge that every innocent human person – born or preborn – has the right to life. Our culture has strayed so far from God and reason that what used to be self-evident is not so clear anymore, especially on left-wing college campuses where procured abortion is considered to be more than a right – it’s been granted the status of a secular virtue.”

When asked about his group’s all-male team, a detail that particularly draws the ire of pro-abortion advocates who say men shouldn’t tell women what to do with their bodies, Richie told The College Fix, “Although we promote activities for the whole family, our core team of volunteers is for men.”

“We strive to live the virtues and spirit of Catholic chivalry,” Ritchie added. “Since the deliberate killing of the unborn is both unjust and morally evil, we must stand up and speak out. Real men will always defend the right to life of the unborn.” As for the bagpipes, they are an effective tool used to draw attention.

“In the age of social media overload, the bagpipes are extremely effective at capturing people’s attention and breaking the barrier of indifference,” Ritchie told The College Fix via email. “The music is patriotic. And it’s also a force multiplier. Students can hear them across campus. They spark curiosity and interest. That’s why we frequently like to play the bagpipes — it draws attention to the noble cause we’re fighting for.”

Regardless of where you stand on the abortion debate, we should all agree that this isn’t the way you react to a difference of opinion or a peaceful demonstration. Violence, assault, mayhem, swearing, shouting, and chaos does nothing to get your point across, and it actually draws attention to those you don’t want to be heard. It also shows a lack of respect for the rights of others, which is rather ironic since that’s what the abortion supporters claim to be advocating for.