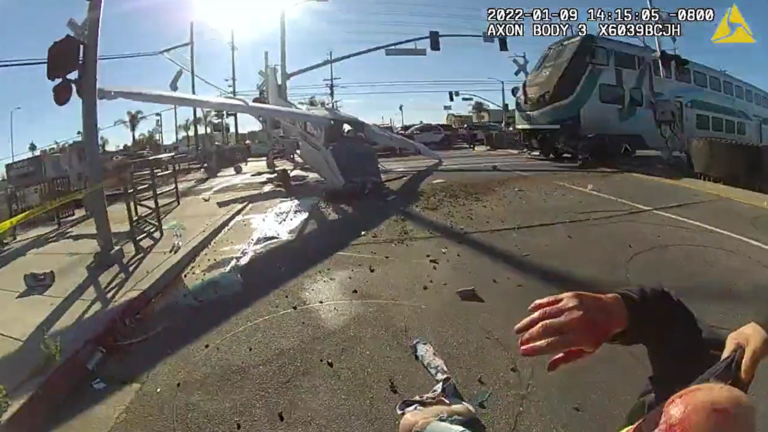 Los Angeles Police Department (LAPD) officers rescued a pilot from his crashed plane just seconds before a train slammed into the aircraft, with the shocking footage going viral online.

In police body camera footage, officers could be seen racing to pull the severely injured pilot out of his plane, which had crash landed on a train line at San Fernando Road and Osborne Street. Just seconds after they pulled the bloodied pilot out, the train could be seen tearing the aircraft apart.

In other footage captured by shocked spectator Luis Jimenez, a large piece of plane debris was sent flying over nearby civilians – narrowly avoiding the cameraman and others nearby who would likely have been killed by the impact.

The LAPD praised the officers for having “displayed heroism and quick action,” and the incident went viral on social media.

“Love our men and women in blue!” tweeted New York Republican Congressman Lee Zeldin, while news anchor Theron Zahn wrote, “If this happened in a movie you would say it could never happen in real life.”