If Joe Biden Is Allowed To STEAL the Presidency; Every City in America Could Look Like Nashville 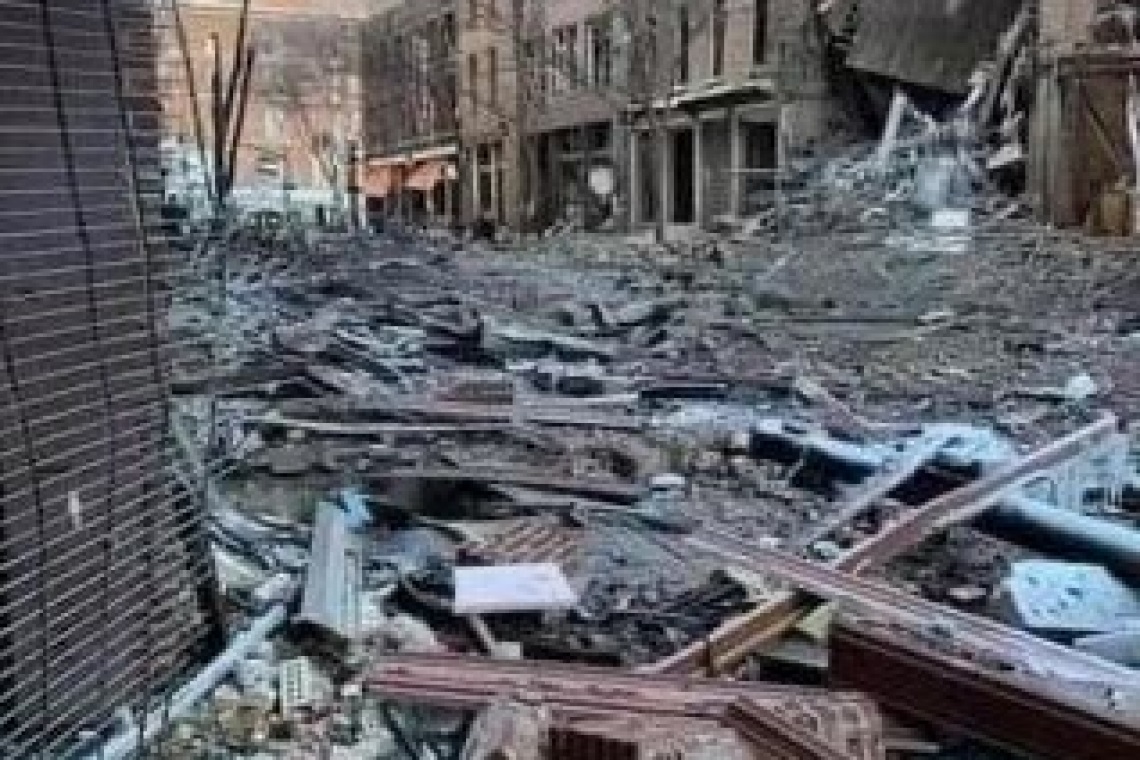 The fact that Joe Biden and the Democrat Party colluded with China and other nations to literally STEAL the US Presidential election on November 3, and that the mass-media is not only covering-it-up but is harassing our lawful President to leave office, is NOT going over well.  The explosion in Nashville on Christmas Day shows what America may have in store for itself if Biden takes office.

For literally decades, the ruling class in America has said and done just about anything they’ve wanted, almost completely without consequence.

From tearing our nation apart for three full years with their lies about Russia collusion, to the outright theft of the November 3 election, there have been pretty much ZERO consequences for any of them.   Lying right to our faces – and 95+% get re-elected? There’s something very wrong with that picture.

After the November 3 election fiasco, Americans are starting to realize that the ruling class has been stealing our elections for years!  Outright theft.  Voting fraud.  Many of them are in power illegitimately.

Dead people casting ballots, non-existent people casting ballots. Unregistered voters casting ballots. People who previously moved from one state to another casting ballots in BOTH states,  Illegal aliens casting ballots, stacks of paper ballots for Joe Biden repeatedly run through tabulation machines, to count them up to EIGHT TIMES EACH in Atlanta and Detroit (caught on security video no less) and outright rigging of voting and/or tabulation machines to take ballots from one candidate and give them to another in secret (Ware County, GA).  ALL of that happened on November 3.  ALL of it is documented with video, Affidavits, eye witness accounts and factual forensic investigation, yet the mass media REFUSES to report any of it.    These crimes happened on such a scale that even the village idiot sees it.  Only the useful idiot liars of the mass media (like todays Editorial in the New York Post), would dare call it legitimate.

The election was NOT legitimate; at least not in Michigan, Minnesota, Wisconsin, Pennsylvania, Georgia, Arizona or New Mexico.  And by flooding those states with illegitimate and phony ballots, the Democrat Party, with help from the China Communist Party, STOLE the Presidency.

Now, a stunning thing has taken place: An American, fed-up with what has been taking place, BLEW-UP an entire city block in Nashville, TN.

The FBI’s official “line” about this is that the guy was some sort of Conspiracy Theorist who thought 5G was attacking him.  While that is the official line (of bullshit) being fed to the general public, MY sources – from my years working with the FBI Joint Terrorism Task Force – tell me a much darker story.  They claim the guy saw the November 3 election was stolen, saw the country being taken over by filthy Communist scum, blamed liberal Democrats, and decided to blow up liberals in the leftist city of Nashville!

He seems to have taken a Recreational Vehicle (Camper) and put a propane tank inside, maybe with a series of Bunson Burners hooked up and positioned at the bottom of the tank to heat it.  The gas in the tank would have fed the Bunson burners until the tank got so hot, the Liquified Natural Gas (LNG) inside, began to boil.  The tank itself, unable to withstand the growing pressure of the boiling, expanding gas inside, BURST . . . and all the liquified gas inside escaped in one fell swoop, igniting along the way into a “BLEVE” (Pronounced Blev – ee) . . . Boiling Liquid Expanding Vapor Explosion.

When I attended Safety Systems, Inc., Hazardous Materials training course at the the St. Augustine Technical Training Center in the 1980’s as part of my training for the Ridgefield Park (NJ) Heavy Rescue Squad, they taught us that in fire fighting, a BLEVE is one of the most feared, most destructive, and thankfully rarest, of incidents.

The destructive power of a BLEVE makes dynamite look like kid’s stuff.

It works like this.   Inside the tank beneath your barbeque grill, the ones everybody has in their backyard, is gas that has been put under so much pressure, it returned to its liquid state.  To give you an idea of how efficient this is, ONE gallon of liquid propane turns into 475 GALLONS of propane gas once it is released from pressure.

The tank beneath a typical barbeque holds THREE gallons of liquid.  Do the math: 3 x 475=1425 gallons of highly flammable gas.  That’s a LOT of fuel for an explosion.

Here’s a video of the Nashville explosion from another angle – one you may not have seen – showing the power of all that liquified gas being set free in one fell swoop:

Here’s the damage it did in those few seconds:

This is not hard to do.   Almost EVERY American household has one or more of these propane tanks.  They’re everywhere.  There’s no way at all to account for them, and no way at all to protect anything from one or more of these being hidden inside ANY vehicle, and set up with self-fed Bunson burners, to detonate on any street, at any time, anywhere.

Which leads us back to Joe Biden, the Democrat/Communist theft of the Presidency, and what it may hold for America’s future.

Given the wide availability of these natural gas tanks, and the complete inability of government to detect or protect against them, what if a whole slew of Patriots decide that since the election was stolen, we don’t have freedom or a country anymore?

What if just a few DOZEN of these folks decide “Fuck it” and start destroying whole city blocks to protest the imposition of Communism, the loss of legitimate elections and the absolute tyranny such things would bring?

What if they go to hardware stores and start buying the very small versions, used by plumbers for sweating pipes?  You know, these kind:

They could break into apartments in OLD, wooden apartment buildings, stash one in someone’s oven, put the oven on Broil and walk out.     Or maybe break in, go into the basement and throw a couple of these tanks into the furnace. When the furnace kicks on or in the case of an apartment oven, Ten minutes or so later . . . right about the time the local police are arriving for the burglar alarm that went off, BOOM. Not only would the apartment be destroyed, it would unleash the gas main and set the structure on fire.

These things are everywhere.  In every hardware store, in every major retail outlet.  Tens of thousands of them are available right now, today, in every city in America. What is Biden gonna do, outlaw them? Too late for that, there’s already enough out there to wreck the entire country.

If what my former Colleagues in the FBI have told me is correct, and this guy in Nashville did what he did over the election being stolen and his country being seized by Communism, it wouldn’t be long until cities in America start looking like Damascus, Syria during its Civil War.

All because the Democrats, so utterly craven for power they could not win legitimately, because their policies and ideas are such utter failures, stole the election.

For myself, there are no circumstances that I can even imagine, that would cause ME to do anything like this.  I just don’t have it in me to hurt innocent people for ANY reason.  So I won’t be one of the people doing any of these things, and none of YOU should do them either.

But according to FBI statements, it seems as though one guy in Nashville DID do such a thing.

There are more of him out there than we know.  They’ve got a major chip on their shoulders over the election – and rightfully so. The election was stolen.

It should not surprise anyone if America starts blowing up and burning if the theft of the Presidency goes through On January 6 when Congress counts the illegitimate electoral votes, or if Biden is actually sworn in.