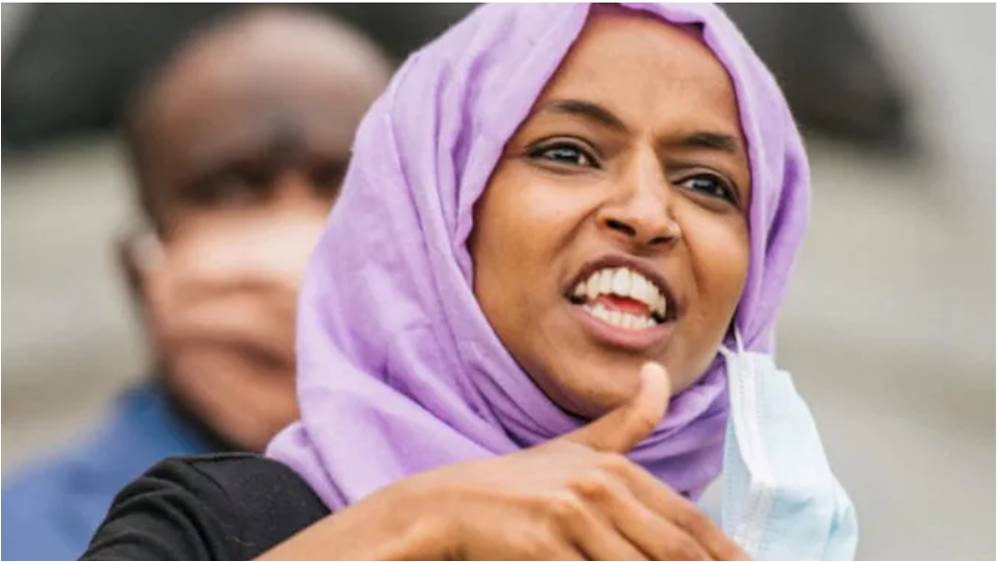 Far-left “squad” member Ilhan Omar has demanded that the USA is held accountable for “unthinkable atrocities,” accusing America of committing “crimes against humanity.”

In a video posted to Twitter, Omar likened America to radical terrorist groups such as the Taliban and Hamas.

Omar says she wants to see the U.S. “have the same level of accountability and justice for all victims of crimes against humanity.”

The Minnesota congresswoman also claimed that America and Israel have committed the same “atrocities” as those perpetrated by the world’s worst terrorist groups.

“We have seen unthinkable atrocities committed by the U.S., Hamas, Israel, Afghanistan, and the Taliban,” Omar wrote on Twitter.

“I asked [Secretary of State Antony Blinken] where people are supposed to go for justice.”

Nypost.com reports: During a House Foreign Affairs Committee hearing, Omar pressed Secretary of State Antony Blinken on his opposition to the International Criminal Court’s (ICC) investigation of alleged war crimes committed by US military personnel in Afghanistan, as well as the Israeli military in their conflicts against Arab militias.

“In both of these cases, if domestic courts can’t or won’t pursue justice and we oppose the ICC, where do we think victims are supposed to go for justice?” Omar asked.

In his response, Blinken referenced the fact that neither the US or Israel are parties to the ICC, saying “we continue to believe that absent a [United Nations] Security Council referral or absent the request by the state itself, that [an ICC investigation is] not appropriate.”

“Mr. Secretary, I do understand that point,” Omar said. “I’m asking what mechanism is available to them.”

“Imagine thinking there is a moral equivalency between freedom-loving democracies and terrorist organizations,” tweeted the official account of Stand For America, the political action committee founded by former US Ambassador to the United Nations Nikki Haley.

The Simon Wiesenthal Center called for Omar to be “stripped of her committee assignments for accusing the US of crimes against humanity”, while Sen. Tom Cotton (R-Ark.) tweeted that Omar “was a refugee from Somalia and America welcomed her. If she really believes America is a hateful country on par with the Taliban and Hamas, she’s welcome to leave.”

“This vile hater has the audacity to enjoy American freedom while using her position to demonize America by lumping it with Hamas and the Taliban!” tweeted former New York Assembly member Dov Hikind. “No mention of Iran, Turkey, Syria, China, or Russia. Odd…Unless you’re anti-American, then it makes total sense!”

Omar has repeatedly been accused of making anti-American and anti-Semitic comments since she arrived in Congress in 2019. Last month, she accused Israel of carrying out an “act of terrorism” during the latest conflict between the Jewish state and Hamas.

Sen. Marco Rubio, (R-Fla.) responded in a Fox News interview by saying Omar was “out of her mind” in making that claim.