Incriminating facts emerge from a Georgia hearing the media buried 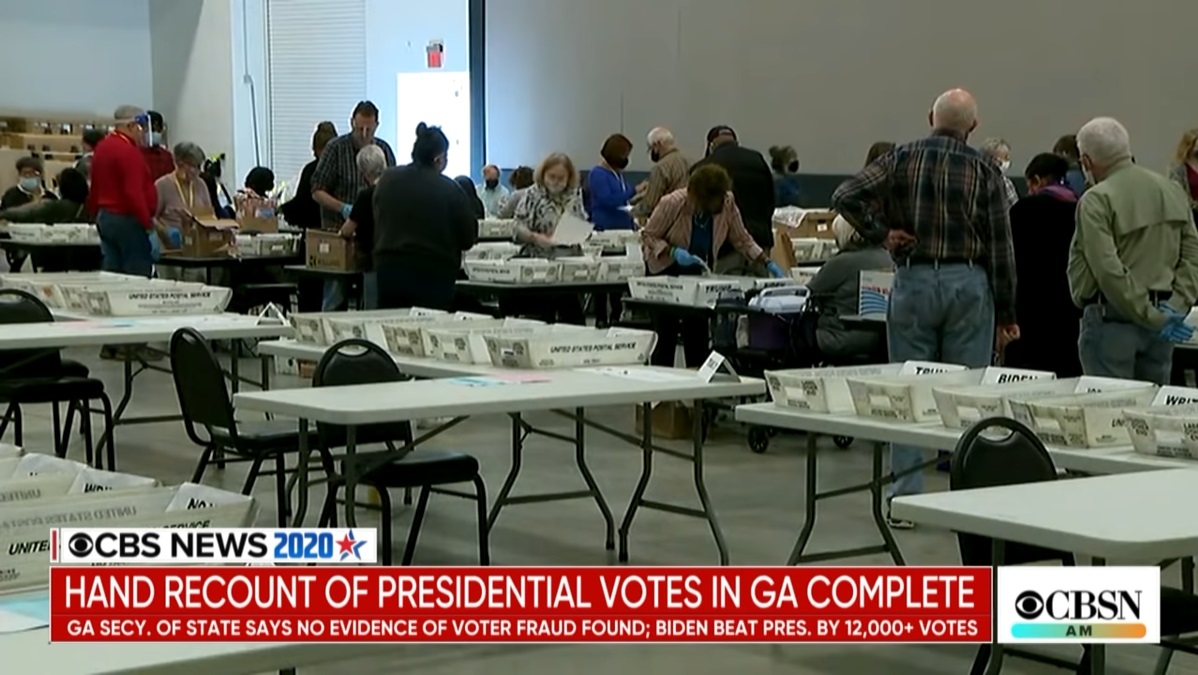 The media kept quiet about a hearing on Wednesday before the Georgia Senate Judiciary Subcommittee on Elections. Perhaps they did so because important information emerged establishing beyond a doubt that significant fraud occurred in Georgia, enough to change that state’s electoral votes. This post focuses on voting machine hacking, shredded evidence, statistical improbabilities, negative counts, and over one hundred thousand “adjudications” that destroyed all evidence of a citizen’s original intent.

Jovan Pulitzer, the man who says there’s a very easy way to determine whether mail-in ballots are real or faked, announced during the hearing that his team had easily hacked into a voting system identical to the systems used during the election and then explained how that access could lead to changes in voting data:

The Georgia Senate Judiciary Subcommittee witness was asked about the access to Dominion Voting System machines FULTON COUNTY which were demonstrated to have been connected to WiFi (!) and he explains how a malicious actor could “modify the data.”

Susan Knox testified that she was at Jim Miller Park in Cobb County on November 20, the day the vote was going to be certified. That was where ballots for the election had been stored, although it’s not a permanent ballot storage facility. She was in the parking lot and saw a Shredding and Recycling truck that was shredding huge bins full of ballots. Knox produced pictures proving that the bin contents were ballots. When Knox called 911, emergency services refused to show up.

Some Senators suggested that old ballots or empty privacy envelopes were being shredded. Knox felt strongly that the evidence belied these suggestions. She didn’t think of the most obvious point, which is why would anyone spend money to shred blank, empty envelopes?

The next witness, Sally Grubbs, took umbrage at the suggestion that the shredding might have been for empty envelopes. She pointed out that ballots are sealed in boxes with evidence tape. Additionally, the envelopes are evidence and cannot be destroyed.

Grubbs made the point that Jim Miller Park is not a secure government facility; it is a fairground. Election events were held there only because of the Wuhan virus. There could not possibly have been old ballots there, so it’s nonsense to suggest that anything but current ballots were being destroyed.

I’ve cued up the five-hour video for the two women’s testimony but, if that fails Susan Knox’s testimony begins at 2:52:00 and Sally Grubbs’s begins at 3:01:30.

What the women are saying, in brief, is that to the extent there was a hand recount, they were unable to audit the recount because workers kept them away from seeing what was going on (depriving the recount of any legitimacy). Then, a week later, the ballots from that hand recount were shredded.

The most amazing information, though, came near the end of the hearing. It details the impossibility of vote subtraction in an honest election, although that’s what happened to Trump, the statistical impossibility of precincts reporting more than 75% of votes for a single candidate – although 151 precincts reported over 90% of votes for Biden – and the impossibly large number of votes adjudicated and then destroyed.

There was a point in that video where we showed, it was Richard Barron, who had said that 113,000 votes were cast, a 105,000 were adjudicated. Right? Now, that’s not physically possible, you know, which we can prove mathematically but, at the same time, if you adjudicate 105,000 votes, you have to understand from a technological perspective, as we’ve delved into all the different aspects of how the vote moves along, when you adjudicate a ballot, that old reference, the image that you saw or anything like that, is completely destroyed. It’s gone. You can no longer reference that thing. And when you go run a hand recount like you did in Georgia, then you’re looking at a printout of those ballot scans. So, at no point did the original voter intent enter into that process once it’s been destroyed.

And that’s how the hand recount jived with the election information: Original ballots were counted outside of the sight of observers and then destroyed, while “adjudicated” ballots were printed up with the information the adjudicators’ chose, and no hint at all as to the voter’s actual intent.

The fact that Republican ballots were misprinted may explain how so many got tagged for “adjudication”: The printing error triggered a machine misreading that required adjudication.

No wonder that, after all the evidence was in, the Senate Judiciary Subcommittee unanimously passed a motion to embrace Jovan Pulitzer’s proposal to audit Fulton County ballots to determine whether they had actually been mailed-in or had been run off a pro-Biden photocopy machine.

(A huge hat tip to AES who found all the best testimony for me.)