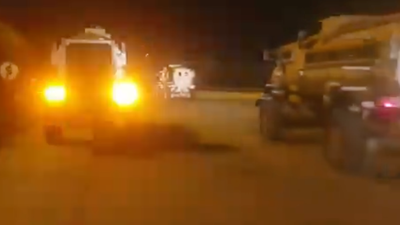 Update (1438ET): The alleged video shows a convoy of “army vehicles” moving towards Durban, a coastal city in the eastern part of South Africa. The city is located in the KwaZulu-Natal province, one of the hardest-hit regions by the weeklong social unrest.

So far, thousands of South African Army Reserve members have been called up to report for duty Thursday morning. There’s been a push by the government to deploy up to 25,000 active-duty troops to quell the unrest.

In the coming hours, if not days, the military presence in KwaZulu-Natal should dramatically increase to thwart further spreading of looting and violence.

Update (1121ET): AFP reports deaths in South Africa’s week-long social unrest have risen to 117. A sharp rise over Wednesday’s 72 figure. With unrest still present, the number is likely headed up.

Update (1034 ET): Local newspaper “Daily Maverick” warns parts of South Africa “are on the brink of severe fuel and food shortages, with key supply routes” severed due to social unrest.

Since the riots began last week, following former president Jacob Zuma’s imprisonment for contempt of court, dozens of goods trucks have been targeted by roving crowds, stripped of their cargo, and more often than not torched or dismantled for parts.

The Road Freight Association warned that the damage to trucks as well as lost income could run into billions of rands, while ongoing delays could result in shelves in shops and shopping centres standing empty.

“Depending on the category of vehicle, the type and value of cargo, and the specialised equipment required for the cargo, this can be anywhere between R3-million and R10-million per vehicle,” said the association’s chief executive, Gavin Kelly. “A simple calculation of capital losses of the 40 trucks destroyed to date amounts to between R250-million and R300-million.”

A number of operators confirmed that the N2 and N3 highways remained closed to them by rioters, with burning tyres and debris strewn across the roads to prevent vehicles from passing.

“There will be shortages,” Kelly warned. “The looting and destruction of retail points, from small businesses to large malls, from regional to national distribution centres and warehouses, will force closures.”

The Consumer Goods Council of South Africa also warned of food shortages, saying up to 800 retail stores had to date lost an estimated R5-billion.

“The disruption to and closure of key transport routes can potentially affect the supply chain of retail products, which could in turn create shortages of basic commodities throughout the country,” it said.

The crowds have also targeted manufacturing sites, forcing oil refineries that refine crude to petrol to shutter operations. Inland provinces get most of their fuel trucked in from the coast. On Wednesday morning, long queues formed at a number of petrol stations in Johannesburg as consumers looked to fill up before supplies ran dry. -Daily Maverick

Emergency food is being flown to KwaZulu-Natal, one of the provinces heavily impacted by unrest.

What comes next could be a terrible humanitarian crisis.

In the past seven days, South Africa has never come closer to becoming a failed state. The riotous looting has reduced Gauteng and KwaZulu-Natal, the two provinces hit hard by the social unrest into what resembles warzones. The country quickly descended into what could be the beginning innings of a civil war, prompting the government to call up military reserves and seek deployment of up to 25,000 troops to quell the violence.

“It is a war zone . . . towns deserted, shops looted, bodies lying on the road,” John Steenhuisen, leader of the main opposition Democratic Alliance, in the province, told Financial Times. “We have an internal African National Congress battle that has spilled over on to the streets of KwaZulu-Natal . . . the initiative has been completely lost by the security services. They need urgent reinforcement.”

Gauteng and KwaZulu-Natal have been overwhelmed by black rioters, many of whom are supporters of former President Jacob Zuma, who was arrested earlier this month and sentenced to prison for corruption charges.

The arrest of Zuma sparked black unrest across the country, more specifically in the two provinces mentioned above.

President Cyril Ramaphosa has been unable to stifle the social unrest as local police and military troops have been outnumbered. The nation remains totally lawless.

Defence Minister Nosiviwe Mapisa-Nqakula told parliament Thursday she had “submitted a request for deployment of plus-minus 25,000” soldiers. There was no word on when the additional troops would hit the streets.

Readers may recall, Wednesday evening, we reported South African Army Reserve has ordered “all Reserve Members” for duty on Thursday morning. There were no exact figures on how many reserves would be deployed.

So far, more than 70 people have died in the mayhem and more than one thousand arrested. The nation’s supply chains have collapsed as major oil refiners shuttered, ports closed, infrastructure damaged, and warehouses looted.

Some figures estimate 45,000 businesses in Durban, a coastal city in KwaZulu-Natal, have been destroyed. This has resulted in gun stores, grocery stores, pharmacies, and shopping malls either being entirely looted or ran out of supplies as massive shortages begin.

“With no help in sight, racial minorities such as whites and Indians are taking up arms to defend their homes and families,” said National Justice.

Johannesburg resident Nhlanhla Lux told FT he defended local businesses with a handful of police and soldiers on Wednesday.

“We can’t sit back while the township economy dilapidates further,” said Lux. “The biggest mall, that employs the biggest number of people, is the one left standing. If it falls, it’s the last elephant.”

For Lux, he is prepared to die” to halt the unrest, he said. “We are on the verge of eating each other.”

So, is it a civil war, a coup d’état, or instigation toward a Rwanda-type situation? Or, simply the poor eating the rich? The major question is why did the state security apparatus not see this coming? Or did they? And further, where is the state of emergency? Where is the tear gas to disperse crowds? Where is the sound cannon and where is the water cannon? Why are the crowds not being dispersed? At this moment, it could be a first force, a second force or a third force, some combination or some weird conflation, in charge of the lawlessness.

According to the “Unrest Map” via PolicyLab, the unrest is beginning to fizzle out in Gauteng and KwaZulu-Natal. The concerns are if riots spread to other provinces.

The government is preparing to reduce further riots by activating thousands of more troops and reserves. The rand strengthened against the dollar for the second day on this positive news.

However, emerging from the smoke is a nation that could be close to civil war, the economy destroyed, supply chains crippled, ports closed, infrastructure ablaze, and there’s no telling on how long it would take to rebuild.

Residents of towns are setting up checkpoints since police and military are non-existent.

The reality in Durban today. Long lines for basic essentials since shortages of ammo, food, and fuel begin. Next, humanitarian crisis?

Huge lines for food as supply chains crippled. People are beginning to starve. No one was prepared.

What happens next in a country that is collapsing remains unknown.