Kharkiv, Kiev and other cities are pounded: Massive Russian attack against military and energy targets of Ukraine! (video) 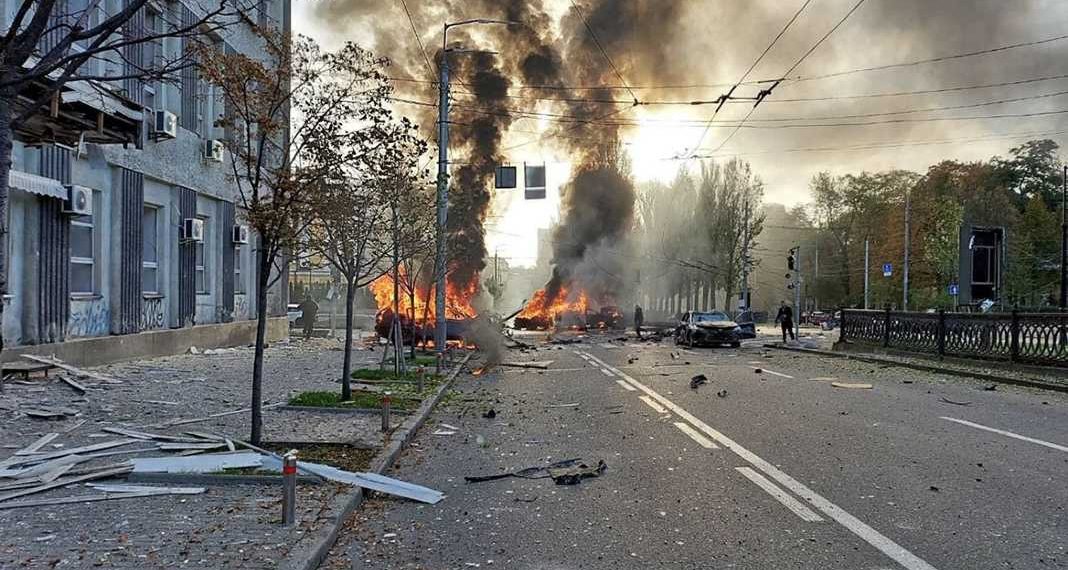 A massive Russian attack with Shahed-136 kamikaze drones and missiles against military and energy targets across Ukraine is underway.

Strong explosions are already reported in many cities and regions of the country along Northern and Eastern Ukraine, in Kherson, Chernobaevka region, in Kyiv, in Dnipropetrovsk. Kharkiv has been hit particularly hard.

According to preliminary information, at least 20 Shahed-136 drones have hit Ukrainian targets.

The Ukrainian authorities were afraid of a massive missile attack by Russia against the country’s energy infrastructure since yesterday. The reason was the second attack on the Engels base, 730 km inside Russia.

This morning, air defense sirens sounded across Ukraine three times although the first warning was cancelled.

Dnepropetrovsk, Poltava and Kharkiv provinces were put on alert the second time.

The third alarm sounded shortly after 12:00 noon across the territory of Ukraine, as well as in Kyiv.

Multiple rocket attacks in the morning as well

Since 10 am, Ukrainian positions have come under massive rocket attacks. At the moment, it is known that targets were hit in Kharkiv, Kyiv and Dnepropetrovsk regions.

In Kharkiv, energy infrastructure facilities were hit, resulting in an emergency shutdown of the metro.

According to Ukrainian intelligence sources, strikes were carried out on the territory of Kyiv region, Dnepropetrovsk region and Kharkiv region.

Which targets were hit by missile attacks in Ukraine is not officially specified.

Kyiv will experience sudden power outages throughout the winter

Residents of Kyiv are obliged to prepare for the possibility of sudden power outages throughout the winter, a municipal official of the Ukrainian capital warned yesterday.

“We will have to endure these conditions throughout the winter, ” Kyiv Deputy Mayor Petro Pandeleev told Ukrainian television.

The distribution network in Kyiv, as in many other major Ukrainian cities, has suffered extensive damage due to systematic Russian missile strikes.

Workers are working non-stop to restore the system, but the situation remains difficult, Pandeleev admitted. Especially on weekdays, when consumptions are higher, the capacity is not enough to meet the demand, the official warned.

Ukrainian Prime Minister Denis Smykhal expressed hope that Ukrainians will spend New Year’s Eve without power outages, provided that there are no new Russian bombings. However, he also acknowledged that the risk of launching new missile strikes against the network is great.

Emergency power outages are being reported in many parts of Ukraine with Ukrenergo, the state-run body managing Ukraine’s electricity grid, saying it introduced them due to excessive power consumption.

In a statement, Ukrenergo states that “due to exceeding the consumption limits, interruptions in electricity supply have been initiated in the regions of Dnipropetrovsk, Zaporizhia, Kharkiv, Lviv, as well as in the city of Kyiv.”

In addition, it is noted that repair work continues at power generation facilities, although it is highlighted that many power grids have been damaged due to massive Russian attacks.

“Due to the scale and complexity of the damage, the restoration of equipment and the operation of some key facilities requires significant time…

We are doing everything possible to improve the situation in terms of supplying the country with electricity,” says Ukrenergo.