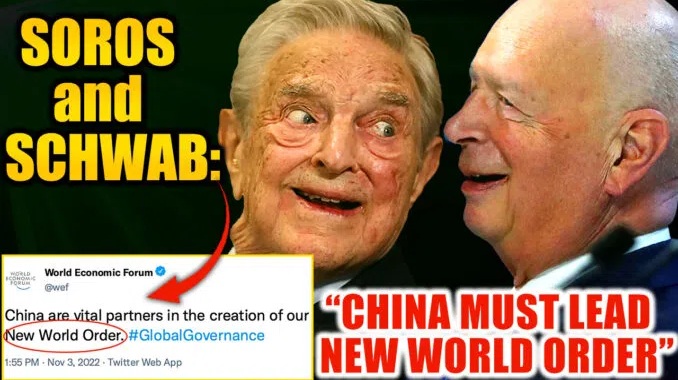 World Economic Forum founder Klaus Schwab has praised China as a model for the transformation of the world during an appearance on Chinese television.

Klaus Schwab, the founder of the World Economic Forum, was speaking to Tian Wei, the host of the “World Insight” program on the Beijing-based China Global Television Network, about the recent G20 summit in Bali, Indonesia.

Asked about the outcome of the summit – which included agreement on policy priorities, such as “tackling climate change” – Schwab ordered the elected world leaders to go even further.

Schwab’s praise for China echoes words uttered by George Soros during an interview with the Financial Times.

George Soros laid out the global elites’ plan for ushering in what he called “a New World Order” during the interview. According to Soros, China must lead this New World Order, “creating it and owning it,” in the same way the United States “owns the current order.”

“I think this would be the time, because you really need to bring China into the creation of a new world order — financial world order,” said Soros. “They are kind of reluctant members of the IMF. They play along, but they don’t make much of a contribution because it’s not their institution. Their share is not commeasurate — their voting rights are not commeasurate — to their weight. So I think you need a New World Order that China has to be part of the process of creating it, and they have to buy in. They have to own it the same way as I said the United States owns… the Washington consensus… the current order, and I think this would be a more stable one where you would have a coordinated policies.”

It just goes to show that the elite have never really hidden what they’re doing. They just reveal it in dry interviews and barely readable policy papers while the public is distracted by an emotionally charged, easily understood “good guy” versus “bad guy” fairy tale.

According to this fairy tale, which is offered by both the mainstream media and the overwhelming majority of alternative media sources, the US is in conflict with Russia, while a determined band of freedom fighting nations (the BRICS) are on a quest to free themselves from the evils of Western imperialism once and for all.

In reality, this is a load of childish nonsense.

Once their plans come to culmination, the world will be ruled by a financial and political order that will feature China as the most prominent nation, supplanting the United States. But don’t take my word for it. Take it straight from the mouths of Klaus Schwab and George Soros.

Schwab has expressed his admiration for the Chinese authoritarian system and revealed that it serves as a transformative model for the New World Order he is working to build.

While Soros is saying that the way to bring the Chinese into the NWO is to have them help create it and to give them “ownership” of it. This is not a new idea, of course, since the Rockefellers hinted at this strategy back in 1961 in their NWO blueprint book Prospect for America: The Rockefeller Panel Reports.

This begs the question, why China? Why would the global elite, whose home base is in Western Europe, have the Chinese front the public face of their New World Order?

A clue to their motivations and strategy can be found in this article, titled “Colonial Elite Rules China for the Illuminati.” In it, the author states…

“The Chinese people would revolt against overt foreign domination, but embrace their place in the NWO if they believed they were in control.”

The Chinese have suffered greatly at the hands of Western imperialism, as has much of the world. As a result, the global elite would have trouble roping many nations into a Western-led New World Order, especially the nationalistic Chinese. Since you can’t have a truly global order without the most populous nation on Earth, the elite opted to use their own legacy of destruction to their advantage. Their two-part strategy to do so is as follows:

First, the global elite set up a China-centered alliance as an opposing force to the Western alliance.
This part of the strategy was hinted at in the mainstream press in this 2002 UPI article, titled “China Wants Its Own ‘New World Order’ To Oppose US Version.”

It is common practice for the cabal to use opposing forces to achieve their ends, and they always make sure they have influence or control over both sides. Think about the Rothschilds’ role in the Second World War, for example.

Second, the global elite have been driving the world public into the hands of the Chinese alliance.
How have they done this, you ask?

They have been so successful in these aims that the average college-educated, CNN watching young woke liberal hates the United States and is unwittingly working towards its downfall.

It is really very simple: the global elite, including Soros, built a rabbit trap (in the BRICS alliance) that looks like a nice, safe hole to hide from danger. They infiltrated our media and education system to brainwash the masses. Now they are beating the bushes (with the Western powers) to drive the rabbits toward the trap.

Soros’ admission to the Financial Times effectively confirms all this. And if we look again at the Rockefeller’s “Prospect for America”, it confirms this viewpoint as well. On page 60, it explains how Chinese nationalism will be used to emerge rapidly and conclusively from colonialism into a New World Order leading culture.

The globalist elite have never hidden what they are doing. Whether it is through the use of signs and symbols, or through open bragging, the elite like to rub our faces in it. This is part of their grand humiliation strategy that is used to keep humanity on its knees.

It’s vital that we work together to continue to expose the elites and their plans for a New World Order. Please like the video below and share it with as many people as you can. The mainstream media and Big Tech are stacked against us and we are relying on your help.