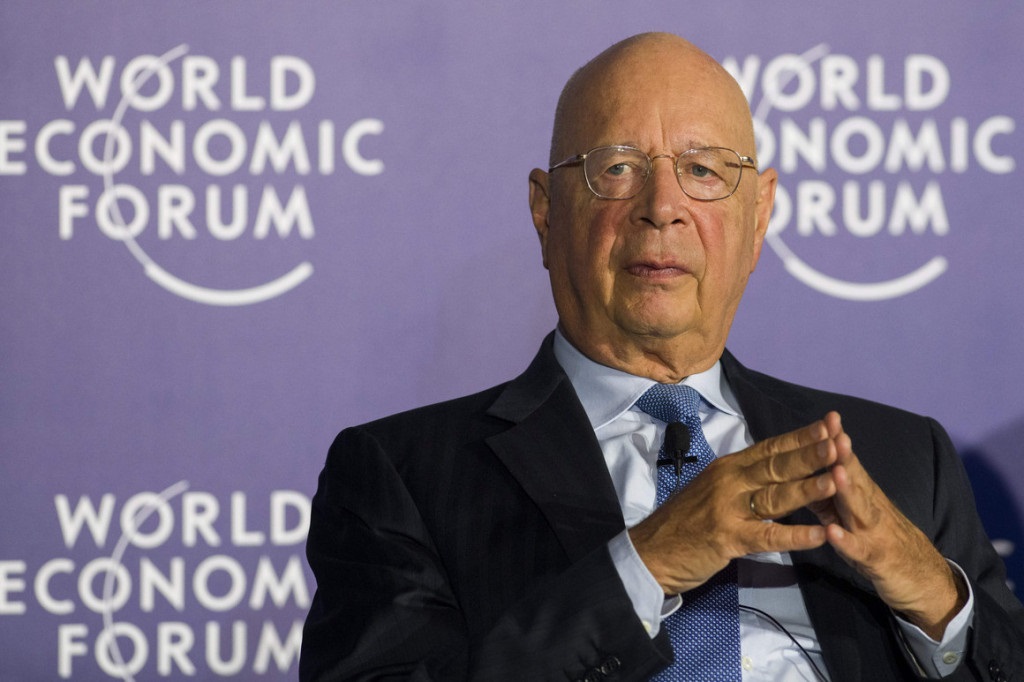 Born in Ravensburg in 1938, Klaus Schwab is a child of Adolf Hitler’s Germany, a police-state regime built on fear and violence, on brainwashing and control, on propaganda and lies, on industrialism and eugenics, on dehumanisation and “disinfection”, on a chilling and grandiose vision of a “new order” that would last a thousand years.

Schwab seems to have dedicated his life to reinventing that nightmare and to trying to turn it into a reality not just for Germany but for the whole world.

Worse still, as his own words confirm time and time again, his technocratic fascist vision is also a twisted transhumanist one, which will merge humans with machines in “curious mixes of digital-and-analog life”, which will infect our bodies with “Smart Dust” and in which the police will apparently be able to read our brains.

And, as we will see, he and his accomplices are using the Covid-19 crisis to bypass democratic accountability, to override opposition, to accelerate their agenda and to impose it on the rest of humankind against our will in what he terms a “Great Reset“.

Schwab is not, of course, a Nazi in the classic sense, being neither a nationalist nor an anti-semite, as testified by the $1 million Dan David Prize  he was awarded by Israel in 2004.

But 21st century fascism has found different political forms through which to continue its core project of reshaping humanity to suit capitalism through blatantly authoritarian means.

This new fascism is today being advanced in the guise of global governance, biosecurity, the “New Normal”, the “New Deal for Nature” and the “Fourth Industrial Revolution”

Schwab, the octogenarian founder and executive chairman of the World Economic Forum, sits at the centre of this matrix like a spider on a giant web.

The original fascist project, in Italy and Germany, was all about a merger of state and business.

Schwab was continuing this approach in a denazified post-WW2 context, when in 1971 he founded the European Management Forum, which held annual meetings at Davos in Switzerland.

Here he promoted his ideology of “stakeholder” capitalism in which businesses were brought into closer co-operation with government.

“Stakeholder capitalism” is described by Forbes business magazine as “the notion that a firm focuses on meeting the needs of all its stakeholders: customers, employees, partners, the community, and society as a whole”.

Even in the context of a particular business, it is invariably an empty label. As the Forbes article notes, it actually only means that “firms can go on privately shoveling money to their shareholders and executives, while maintaining a public front of exquisite social sensitivity and exemplary altruism”.

But in a general social context, the stakeholder concept is even more nefarious, discarding any idea of democracy, rule by the people, in favour of rule by corporate interests.

Society is no longer regarded as a living community but as a business, whose profitability is the sole valid aim of human activity.

Schwab set out this agenda back in 1971, in his book Moderne Unternehmensführung im Maschinenbau (Modern Enterprise Management in Mechanical Engineering), where his use of the term “stakeholders” (die Interessenten) effectively redefined human beings not as citizens, free individuals or members of communities, but as secondary participants in a massive commercial enterprise.

The aim of each and every person’s life was “to achieve long-term growth and prosperity” for this enterprise – in other words, to protect and increase the wealth of the capitalist elite.

This all became even clearer in 1987, when Schwab renamed his European Management Forum the World Economic Forum.

The WEF describes itself on its own website as “the global platform for public-private cooperation”, with admirers describing how it creates “partnerships between businessmen, politicians, intellectuals and other leaders of society to ‘define, discuss and advance key issues on the global agenda’.”

The “partnerships” which the WEF creates are aimed at replacing democracy with a global leadership of hand-picked and unelected individuals whose duty is not to serve the public, but to impose the rule of the 1% on that public with as little interference from the rest of us as possible.

In the books Schwab writes for public consumption, he expresses himself in the two-faced clichés of corporate spin and greenwashing.

The same empty terms are dished up time and time again. In Shaping the Future of the Fourth Industrial Revolution: A Guide to Building a Better World Schwab talks of “the inclusion of stakeholders and the distribution of benefits” and of “sustainable and inclusive partnerships” which will lead us all to an “inclusive, sustainable and prosperous future”! (1)

Behind this bluster, the real motivation driving his “stakeholder capitalism”, which he was still relentlessly promoting at the WEF’s 2020 Davos conference, is profit and exploitation.

For instance, in his 2016 book The Fourth Industrial Revolution, Schwab writes about the Uberisation of work and the consequent advantages for companies, particularly fast-growing start-ups in the digital economy: “As human cloud platforms classify workers as self-employed, they are—for the moment—free of the requirement to pay minimum wages, employer taxes and social benefits”. (2)

The same capitalist callousness shines through in his attitude towards people nearing the end of their working lives and in need of a well-deserved rest: “Aging is an economic challenge because unless retirement ages are drastically increased so that older members of society can continue to contribute to the workforce (an economic imperative that has many economic benefits), the working-age population falls at the same time as the percentage of dependent elders increases”. (3)

Everything in this world is reduced to economic challenges, economic imperatives and economic benefits for the ruling capitalist class.

The myth of Progress has long been used by the 1% to persuade people to accept the technologies designed to exploit and control us and Schwab plays on this when he declares that “the Fourth Industrial Revolution represents a significant source of hope for continuing the climb in human development that has resulted in dramatic increases in quality of life for billions of people since 1800”. (4)

He enthuses: “While it may not feel momentous to those of us experiencing a series of small but significant adjustments to life on a daily basis, it is not a minor change—the Fourth Industrial Revolution is a new chapter in human development, on a par with the first, second and third Industrial Revolutions, and once again driven by the increasing availability and interaction of a set of extraordinary technologies”. (5)

But he is well aware that technology is not ideologically neutral, as some like to claim. Technologies and societies shape each other, he says. “After all, technologies are tied up in how we know things, how we make decisions, and how we think about ourselves and each other. They are connected to our identities, worldviews and potential futures. From nuclear technologies to the space race, smartphones, social media, cars, medicine and infrastructure—the meaning of technologies makes them political. Even the concept of a ‘developed’ nation implicitly rests on the adoption of technologies and what they mean for us, economically and socially”. (6)

Technology, for the capitalists behind it, has never been about social good but purely about profit, and Schwab makes it quite clear that the same remains true of his Fourth Industrial Revolution.

In case the meaning of “creating value” was not clear, he gives some examples: “Drones represent a new type of cost-cutting employee working among us and performing jobs that once involved real people” (8) and “the use of ever-smarter algorithms is rapidly extending employee productivity—for example, in the use of chat bots to augment (and, increasingly, replace) ‘live chat’ support for customer interactions”. (9)

Schwab goes into some detail about the cost-cutting, profit-boosting marvels of his brave new world in The Fourth Industrial Revolution.

He explains: “Sooner than most anticipate, the work of professions as different as lawyers, financial analysts, doctors, journalists, accountants, insurance underwriters or librarians may be partly or completely automated…

“The technology is progressing so fast that Kristian Hammond, cofounder of Narrative Science, a company specializing in automated narrative generation, forecasts that by the mid-2020s, 90% of news could be generated by an algorithm, most of it without any kind of human intervention (apart from the design of the algorithm, of course)”. (10)

It is this economic imperative that informs Schwab’s enthusiasm for “a revolution that is fundamentally changing the way we live, work, and relate to one another”. (11)

Schwab waxes lyrical about the 4IR, which he insists is “unlike anything humankind has experienced before”. (12)

He gushes: “Consider the unlimited possibilities of having billions of people connected by mobile devices, giving rise to unprecedented processing power, storage capabilities and knowledge access. Or think about the staggering confluence of emerging technology breakthroughs, covering wide-ranging fields such as artificial intelligence (AI), robotics, the internet of things (IoT), autonomous vehicles, 3D printing, nanotechnology, biotechnology, materials science, energy storage and quantum computing, to name a few. Many of these innovations are in their infancy, but they are already reaching an inflection point in their development as they build on and amplify each other in a fusion of technologies across the physical, digital and biological worlds”. (13)

He also looks forward to more online education, involving “the use of virtual and augmented reality” to “dramatically improve educational outcomes” (14), to sensors “installed in homes, clothes and accessories, cities, transport and energy networks” (15) and to smart cities, with their all-important “data platforms”. (16)

“All things will be smart and connected to the internet”, says Schwab, and this will extend to animals, as “sensors wired in cattle can communicate to each other through a mobile phone network”. (17)

He loves the idea of “smart cell factories” which could enable “the accelerated generation of vaccines” (18) and “big-data technologies”. (19)

These, he assures us, will “deliver new and innovative ways to service citizens and customers” (20) and we will have to stop objecting to businesses profiting from harnessing and selling information about every aspect of our personal lives.

“Establishing trust in the data and algorithms used to make decisions will be vital,” insists Schwab. “Citizen concerns over privacy and establishing accountability in business and legal structures will require adjustments in thinking”. (21)

At the end of the day it is clear that all this technological excitement revolves purely around profit, or “value” as Schwab prefers to term it in his 21st century corporate newspeak.

Thus blockchain technology will be fantastic and provoke “an explosion in tradable assets, as all kinds of value exchange can be hosted on the blockchain”. (22)

The use of distributed ledger technology, adds Schwab, “could be the driving force behind massive flows of value in digital products and services, providing secure digital identities that can make new markets accessible to anyone connected to the internet”. (23)

In general, the interest of the 4IR for the ruling business elite is that it will “create entirely new sources of value” (24) and “give rise to ecosystems of value creation that are impossible to imagine with a mindset stuck in the third Industrial Revolution”. (25)

The technologies of the 4IR, rolled out via 5G, pose unprecedented threats to our freedom, as Schwab concedes: “The tools of the fourth industrial revolution enable new forms of surveillance and other means of control that run counter to healthy, open societies”. (26)