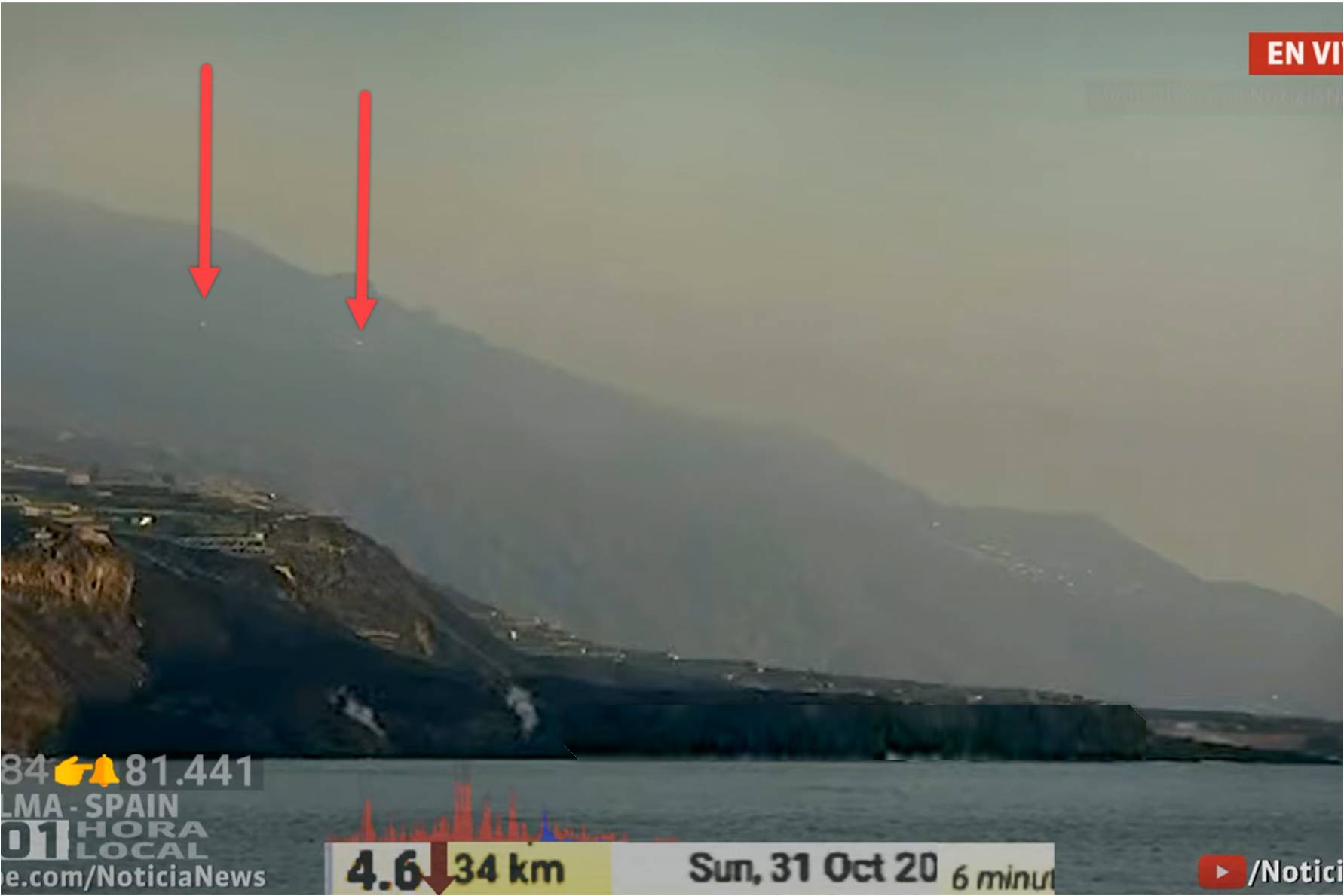 A very serious development on the island of LaPalma, Canary Islands, Atlantic Ocean off the northwest coast of Africa on Sunday afternoon: At least two small STEAM emissions have begun coming out of the ground high-up along the ridge atop the unstable landmass on the southwest flank of the island.

As this story is written at 3:09 PM eastern U.S. time, the steam vents became visible within the past hour.  The fact that this is actually steam has been visually verified and confirmed by a Geologist, directly consulted by the Hal Turner Radio Show.  There are no buildings up on that ridge, and no roads on which a vehicle could travel, so there’s nothing there that maybe could reflect light and be mistaken for steam.

Here is an image, screenshot from Canary Islands Television:

As this story is being written, a THIRD vent has opened up lower on the ridge and in addition to steam being initially visible, the red glow of lava is now also visible!

Here is the vent as it began to spew steam:

Here is the same vent with a minor red glow of lava visible:

Here is the same vent, spreading to more vents, with a clearly visible red glow of lava in it:

This is about the single worst development that could have taken place in this ongoing eruption.

What this proves is that lava has entered the old Cumbre Vieja volcano lava tunes and is now traveling in those tubes along the southwest flank of the Cumbre Viejo volcano.

That southwest flank is about twelve miles long, measured north to south.   It is about two miles wide measured from east to west.  The angle of that land is extremely steep.  On the east, the ridge is 6,000 feet tall.  On the west, the land is at sea level . . . all within two miles.

In an earlier volcanic eruption in 1971, that entire ridge, a land mass the size of Manhattan island in New York City, BEGAN to slide toward the ocean.   It slid 13 feet, then stopped.

That slide created a large crevice . . . a fault . . . along the top of the ridge that was so wide and so deep, humans could walk in it, as shown in the photo of the actual crack atop that ridge:

That crack in the land runs at least NINE MILES north to south along the ridge.

Here’s the trouble: Because the island of LaPalma is a volcanic island, sitting atop an undersea volcano which has risen 24,606 feet from the ocean floor, all the upper layers of what is now visible island, have a lava foundation.  What was once molten lava, solidified and is now impermeable to water.  Water cannot drain through it.

In the decades since the giant land mass “slid” 13 feet, it has rained on LaPalma the way it rains everywhere else.   The rain soaked into the ground.  But as it did, it reached the impermeable, solidified lava foundation and is stuck there. It cannot drain out.

Also, from previous eruptions, there are lava tubes running vertically up to the top of that same ridge, to the old vent holes seen on top.   So there’s also ground water stuck between those lava tubes.

Here is an aerial photo of those old lava tubes from the actual island itself.  This is what it actually looks like:

As lava from the present eruption travels through those old lava tubes, it is hot; 2,000 degrees.   It will start to heat the groundwater, which will quickly reach boiling temperature.   But it cannot boil because it is under pressure from the rocks and ash piled atop it. So the pressure from the heated/expanding water, will provide “lift” against the ash and rock.   If enough water expands enough, or enough steam is generated beneath all that ash and rock, there will be enough “lift’ to overcome the friction which holds all that unstable land in-place.  Gravity will do the rest . . .

The land will be able to simply start sliding by virtue of gravity; and when it starts sliding, that will release the pressure on the heated water trapped under the ash and rock, which will will then burst into steam, providing even MORE “lift” to propel that whole land mass off the side of the island and “plop” right into the Atlantic Ocean.

This is an aerial image of the actual section of unstable land mass that scientists fear will slide into the ocean:

Scientists in the past have personally studied this volcano, it’s underground lava tubes and the fault line atop the ridge, and they concluded that if the land mass slides into the ocean, it will create what they called a “mega-tsunami” which will travel across the entire Atlantic Ocean.

When that tsunami reaches the coast of north America, it will pile up on itself and become a wall of water thirty to fifty METERS high; that’s a wave 100-164 FEET tall.

If a tsunami of that size hits the US east coast, as it comes ashore, it will literally wipe out whatever is in its path: Entire cities like Boston, New York, most of coastal plain New Jersey, Philadelphia, Baltimore, Washington, DC, Norfolk, VA,  Charleston, Savannah, Jacksonville, Miami, and the entirety of the Florida Keys. . .  and everything in between those places.

Here is a four minute video with the actual Geologists who personally inspected the island and its volcano, laying out what they see taking place:

Based on what these eminent and qualified scientists have said, we went to the computer model map located at Floodmap.net and asked to to show us what the U.S. East Coast would look like if a fifty meter tsunami struck.   Here is what the latest, most modern computer model showed:

A fifty meter flooding tsunami, would put the following areas (in shaded blue) under water:

In past coverage of this ongoing story, this web site has repeatedly told readers there is no need to panic, but there is a valid need to PREPARE.   We suggested you decide now on WHERE you will go if the landslide takes place, and you have only 7 to 8 hours to evacuate.  We suggested you have a “go-bag” packed with a couple days clothing, medicine and other supplies, and have CASH MONEY because if the tsunami takes out New York City, that will take out the banks, and they won’t be able to process credit/debit card requests.  You will need CASH to buy food or arrange lodging.

Today, with the serious developments shown in the photo above, this web site now — for the first time — tells you you should already be packing those “go-bags” and put them in the trunk of a car, in case.   You should have your car(s) fully gassed-up and ready to go.

We have never suggested this before, but as of this day, the new developments on LaPalma are such, that the land can now slide at ANY TIME and without warning.   As the lava heats the ground water, none of us know IF or WHEN that land will slide.

And while it will take seven to eight hours to reach the US coast, YOU will not have that much warning.   If government warns you at all, it may only be an hour or two, after tsunami buoys off the US east coast get triggered.   But those buoys are only about 120 miles offshore, and by the time they get triggered, there won’t be much time to evacuate at all.

Moreover, and this is critical, if you think rush hour traffic is bad, what do you think the roads will look like when a tsunami warning goes out, and EVERYONE is trying to flee for their lives?   We suspect the roads will totally clog so fast, no one will be able to move.   In fact, some people, panicking, could actually go “Mad Max.”

If you hear that this landslide has taken place, don’t wait for government to tell you to leave.  LEAVE IMMEDIATELY because the traffic will congest so fast, that if you aren’t out before the rest of the general public, you may not ever get out.

The eruption has gotten much, MUCH worse.   Gigantic flows of lave are now hurling out of the volcano; MUCH MORE than ever before.

In 35 minutes, the lava flow was so fierce, it looked like this at sea level:

This whole situation seems to be getting MUCH worse by the hour.

(Hal Turner Remark: For what it’s worth, for the first time, I told my wife and son we need to pack OUR OWN go-bags, gas-up OUR OWN vehicles, and be ready to haul ass. Both I and my son have gone to the bank ATM and gotten cash money. We don’t want to be in an ATM line or a gasoline station line with all the people who never plan anything and suddenly are in everyone else’s way. So I’m not simply giving advice, I’m doing these things myself at our home in northeastern New Jersey, just three miles due west of the Empire State Building in midtown Manhattan.  — Hal Turner)

More information has come in from a Geologist working with a government; I won’t say which government.

This Geologist pointed out that today, the island of LaPalma suffered another Magnitude 5.0 earthquake.   In and of itself, that does not seem odd except for this:

The Geologist said that it took weeks for enough magma to move, in order that LaPalma could have the 5.0 quake YESTERDAY.   He pointed out that now,  only 24 hours later, enough magma has already moved to give the island yet another 5.0 quake.

While the Geologist admits this could just be coincidental, he ALSO pointed out that the rush of magma from deep within the earth, could now be so voluminous underground, that it was magma which caused the second 5.0 quake today . . . . and if that much magma is now moving, HE SAYS – and he qualifies this as a highly unlikely possibility — the amount of magma on the move could cause the island of LaPalma to actually explode within 48 hours.

The geologist points to the public earthquake location data to reiterate his thinking.  The public data shows the earthquakes, and their depths as follows:

He then drew a line to show where those quakes __could__ continue moving within the next 48 hours, to back up his belief the island could explode from the magma already coming up in such volume as to cause todays’ second Magnitude 5.0 in a mere 24 hours.  Here’s his line:

He went on to say that “if that much magma is coming up that fast, the island will simply burst as it makes the surface.”  He told me to watch for vast ground deformation (inflation) over widespread and new areas.  He says “that will be the sign that the island is lost.”

Finally, he pointed out that the Canary Islands government volcano web site, is showing Harmonic Tremors, which he says is caused by Magma movement, “higher tonight than any time in the last 6 weeks” which, he says “shows a gigantic burst of magma is heading toward the surface.”  Here’s the harmonic tremor chart he referred me to:

I am not a Geologist.  I cannot speak to the validity of this man’s claim.  He did make great effort to qualify his thinking as only being a “remote and very unlikely possibility” yet he chose to tell me about it anyway.  That’s the part that bothers me.

People in scientific fields don’t make wild-eyed, irrational claims.  To do so would wreck their careers and ruin their reputation.  Yet this Geologist told me this . . .  fantastic . . . possibility.

So, with me making sure YOU know the Geologist says it is only a “remote” and “unlikely” event, I pass the info along to you just in case.  Make of it what you will.