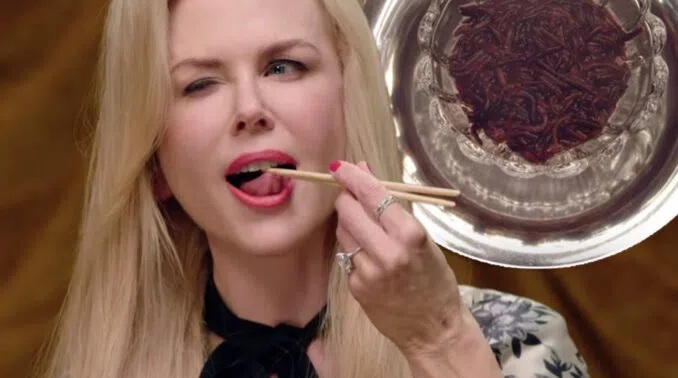 Hollywood star Nicole Kidman has joined the ranks of the elite who are pushing humanity to stop eating steak and start eating bugs and insects. Filming a promotional video for Vanity Fair, Kidman attempts to convince the masses that insects such as hornworms, crickets and grasshoppers are delicious.

Claiming that “eating micro-livestock” is her “hidden talent,” Kidman, whose father was an alleged member of a notorious international pedophile ring, declares that hornworms are “extraordinary” and crickets are “awesome… like nothing you’ve ever tasted.”

Meanwhile, fried grasshoppers for dessert are “exquisite” according to the Hollywood star, who can barely suppress a smirk at various moments during the video.

It seems the elite are intent on force feeding the masses with bugs and insects.

While food processing plants across the US continue to mysteriously burn to the ground, a giant new factory has quietly opened up that is making food out of insects.

At the end of May, Aspire Food Group announced that in London, Ontario, Canada, it had opened the largest “alternative protein” food facility in the world that uses crickets as its main ingredient.

“Aspire’s new plant will reportedly produce 9000 metric tons of crickets every year for human and pet consumption. That’s about two billion insects to be distributed annually across Canada and throughout the United States,” a report noted.

Aspire boasted that it already has orders that will keep it busy for the few years ahead.

Westernjournal.com reports: Aspire claims that crickets are rich in protein and should be considered the next “superfood.” The fiber-rich food source is already found in grocery stores and restaurants, they say, and they “have a smaller environmental footprint than traditional protein sources.”

Leftists have been touting the “sustainability” of bugs as food for decades, of course, and quasi-government entities have tried flogging bugs for years.

Scientists and researchers in Britain have been trying to get the U.K. government to begin serving school children bug-sourced food in the nation’s government-controlled schools.

“Researchers are planning to feed bugs like house crickets and mealworms to children between the ages of five and 11 from four primary schools in Wales,” the Daily Mail reported in May.

The media also often pushes out stories about how humans should shift food production toward consumption of insects. Last year, Time magazine published a piece proclaiming, “How Humans Eating Insects Could Help Save the Planet.” The Guardian jumped into the game claiming, “The Future of Food is Insects.” And not to be outdone, left-wing CNN touted the topic, saying bugs are “[t]he food that can feed, and maybe save, the planet.”

Aspire is registered out of the African nation of Ghana and now has facilities in the U.S. and Canada.

“We basically mapped out the entire journey of a cricket from hatch to batch and looked at every opportunity to collect data and apply automation,” Ashour told Food Navigator in 2017.

Ashour is hardly alone. Leftist billionaire Bill Gates has also been trying to push bugs for food. A group dedicated to developing bugs for food won a large grant from the Bill & Melinda Gates Foundation back in 2012 and has been working to switch humanity to bug consumption.

Gates has also tried guiding people into synthetic foods, as well. Just last year, Gates made news by insisting that the world stop eating beef and replace it with synthetic meat products.

Meanwhile, as the billionaire elites and left-wing scientists are trying to push us to eat bugs and chemically created, synthetic foods, America has been experiencing a growing number of disasters befalling our farms, factories and processing plants, putting even more strain on our already stressed food chain.

As prices continue to skyrocket in America’s groceries, we’ve seen one disaster after another. Last week thousands of fat cattle suddenly died — apparently of heat-related issues — in Kansas, more than half a million pounds of pre-cooked chicken had to be recalled over fears of illness and thousands of chickens died in a massive blaze at an Arkansas farm.

All that is in addition to the list of a growing number of facilities being destroyed just when they are most needed.

Amid all this destruction, a group of left-wingers in Canada is opening a huge facility to urge us to eat bugs. It may be a coincidence, but the timing is amazing.