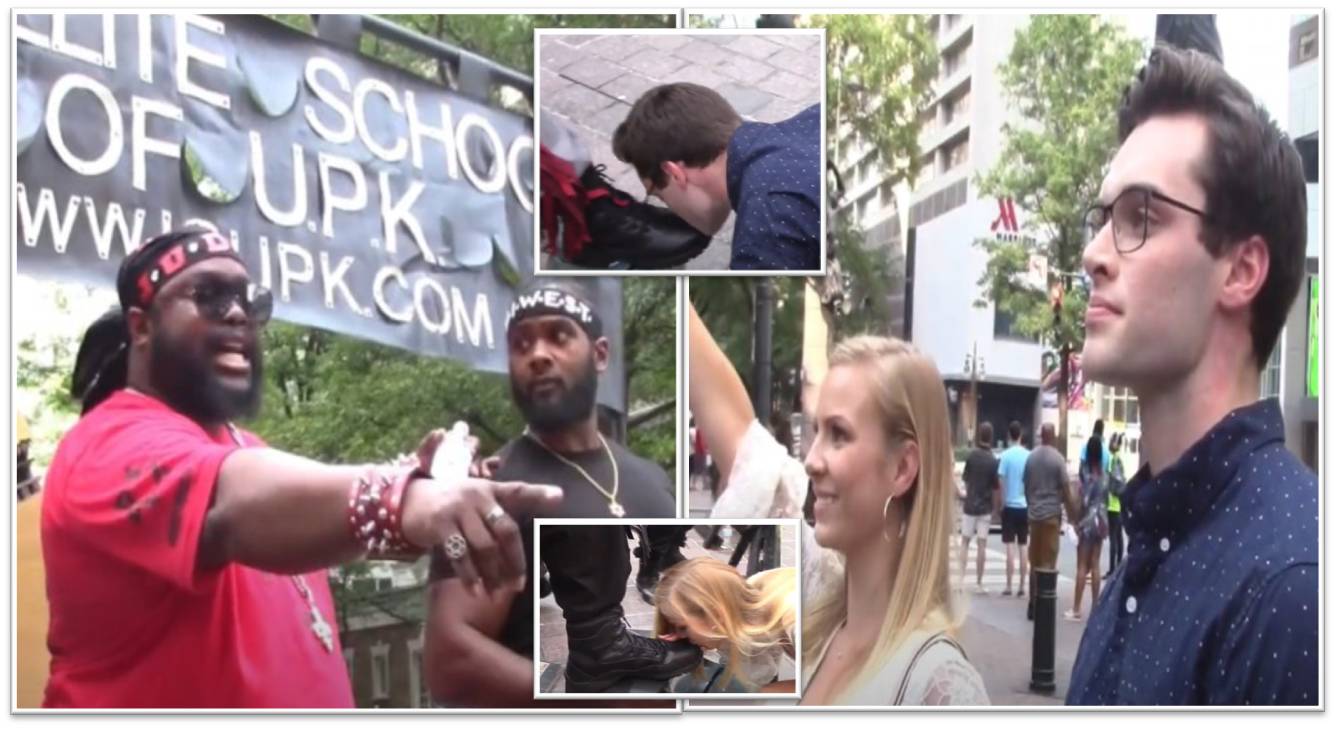 A white couple was captured on video as they kissed the boots of a black supremacist group in order to apologize for being white. The footage captured just how sorry they are.

The Israelite School of Universal Practical Knowledge or ISUPK, a radical faction of the black nationalist Black Hebrew Israelite movement, posted a video to their YouTube channel, which garnered a bit of attention. In the clip, a white couple is seen kissing the boots of the black supremacists to apologize for their white ancestors’ presumed oppression of African Americans.

Appearing to have been filmed in First Citizens Plaza in Charlotte, North Carolina, the video was posted to YouTube with the title “WHEN HEATHENS #RECOGNIZE TRUE #PROPHETS OF #GOD.” Although it only received thousands of views there, it went viral when it was posted to Twitter by Brett MacDonald. “Liberal whites are something else,” MacDonald captioned his post, which received over a million views.

At the start of the video, a fat, bearded man in a bandana and sunglasses is seen preaching on a stage in the middle of the square while flanked by two black-clad acolytes, standing at attention in military-style. The man is John Lightbourne, who leads the ISUPK and goes by Commanding General Yahanna, and he has an obvious crow to pick with white people. Lightbourne first bellows about how black men are allegedly oppressed in America, by everyone from police to employers.

“And still white people walk around like there’s nothing wrong. There’s nothing wrong here in America. Everything is great. Everything is lovely,” Lightbourne bemoans before recounting the horrors of white supremacist Dylan Roof’s deadly 2015 shooting at a black church in Charleston, South Carolina: “Dylan Storm Roof shot grandmothers, shot grandsons. He shot people while they were on their knees begging for their life.”

Lightbourne then turns his attention to a young white couple, standing near the stage and listening to his message. “You know how you can prove that you are sorry for what white America has done?” he asks the “white lady” who eagerly asks him how. “If I show it in the scripture would you do it?” he asks her, and she nods vigorously. “Mister White Man, you would?” Lightbourne asks the woman’s boyfriend, who eagerly agrees as a smile spreads across his face.

At Lightbourne’s direction, one of his acolytes reads from the King James Bible. “My little children … let us not love in word, neither in tongue; but in deed … and in truth,” the acolyte says, reciting 1 John 3:18 and leading Lightbourne to give the couple his interpretation: “You can’t just say you’re sorry for what black people’s gone through. You gotta prove it. You gotta do something with your deeds, D-E-E-D-S, deeds, your actions.”

“And kings shall be thy nursing fathers … and their queens thy nursing mothers,” the acolyte adds, reading from Isaiah 49:23, which is again followed by Lightbourne’s interpretation: “We were the rulers of the earth. But we were made to come over here and pick cotton and serve you,” he explains. “Now, the kings gonna be our nursing fathers like we were your nursing mothers.”

“They shall bow down to thee,” the acolyte continues, prompting Lightbourne to tell the couple, who later identify themselves as Seth and Skylar, that the Bible is commanding them to show submission to him. “The first thing you gotta do to show your deeds, that you are sorry for what has happened to our people, you gotta bow down,” he says. “You should be on your knees. That was a command.”

Initially, the couple looks confused and doesn’t immediately act. “Ain’t nobody moving!” Lightbourne yells. Seth receives his message loud and clear. Laughing nervously, he gets on his knees. Skylar does the same, giggling and making exaggerated bowing gestures. “That’s right. That’s the first thing you gotta do,” Lightbourne remarks, seemingly pleased as he calls for applause for the couple. Skylar claps for herself as she kneels on the ground and tells Lightbourne and his group that they “are awesome.”

However, Lightbourne isn’t satisfied yet. “That’s the first part,” he says. “Now, here’s where it gets tricky. You gotta put your face toward the earth,” he continues. Following his command, the couple immediately bends forward as the acolyte adds, “And lick up the dust of thy feet.” Lightbourne assures the couple he’s not asking them to lick the dust from his feet before jumping down from the stage to place his boot on a donation jug.

“I’m only asking you to kiss my boot. That’s it,” he says. After Seth crawls forward and complies, Lightbourne adds, “Not only you but your woman as well has got to kiss the boot.” Skylar, who had stood to applaud her boyfriend’s act of subservience, follows his lead. But, it’s still not enough for Lightbourne. In a final assertion of dominance, the ISUPK leader orders the couple to do the same for the rest of the assembled members.

“Now, these are the prophets of the Lord,” he declares, referring to his acolytes. “Everybody, come get properly saluted,” he adds, and one by one, they step forward and present their foot for Seth and Skylar’s lips. At least one black nationalist even returns for seconds as the couple kisses a dozen boots. “Keep on coming, Mister White Man. Keep on going. Keep on going, man,” Lightbourne says. “This is a white couple right here that’s proving that they are sorry for what their forefathers have done.”

“We’re here for ya,” Skylar says with Seth adding, “Keep doing what you all [are] doing, man.” After assuring the compliant couple that they have earned a degree of divine mercy, Lightbourne tells them to go to the bank and bring him some money. Seth and Skylar agree and thank the ISUPK, which has been designated an anti-white hate group by the Southern Poverty Law Center. “You’re changing everything,” a seemingly grateful Skylar says.

“Now, when Christ comes back and establishes his kingdom on the earth, you will receive some mercy, man, because you knew who you were in the presence of,” Lightbourne says. “Now, the next thing you definitely can do is right across the road — Bank of America … come give a healthy donation man so we’ll keep pushing this truth.”

Brett MacDonald shared additional clips of the ISUPK pulling the same stunt on other white couples, who must be obliviously unaware of what the Black Hebrew Israelites, who claim to be descended from the biblical Israelites and practice some Jewish rituals, stand for. The group has faced national scrutiny after men allegedly linked to them were charged for carrying out attacks against Jews in New Jersey in December 2019.

After the first attack, which involved a shooting at a kosher supermarket in Jersey City, Lightbourne told USA Today that the gunman’s actions did not represent the views of Black Hebrew Israelites and that he was unfamiliar with the suspects. “We are not into any form of violence or terrorism,” he said. “For us, that’s counterproductive. We have a bigger job, and that’s straightening out the lives of blacks and Latinos in the inner city.”

But, that’s not the only incidents the group has been criticized for. The Black Hebrew Israelites are also accused of instigating the headline-making confrontation between Covington Catholic High School students and a Native American protestor at the January 2019 March for Life anti-abortion rally in Washington, D.C. Yet, here is the ISUPK, successfully getting white people to kiss their boots as a form of apology for something they did not even do.