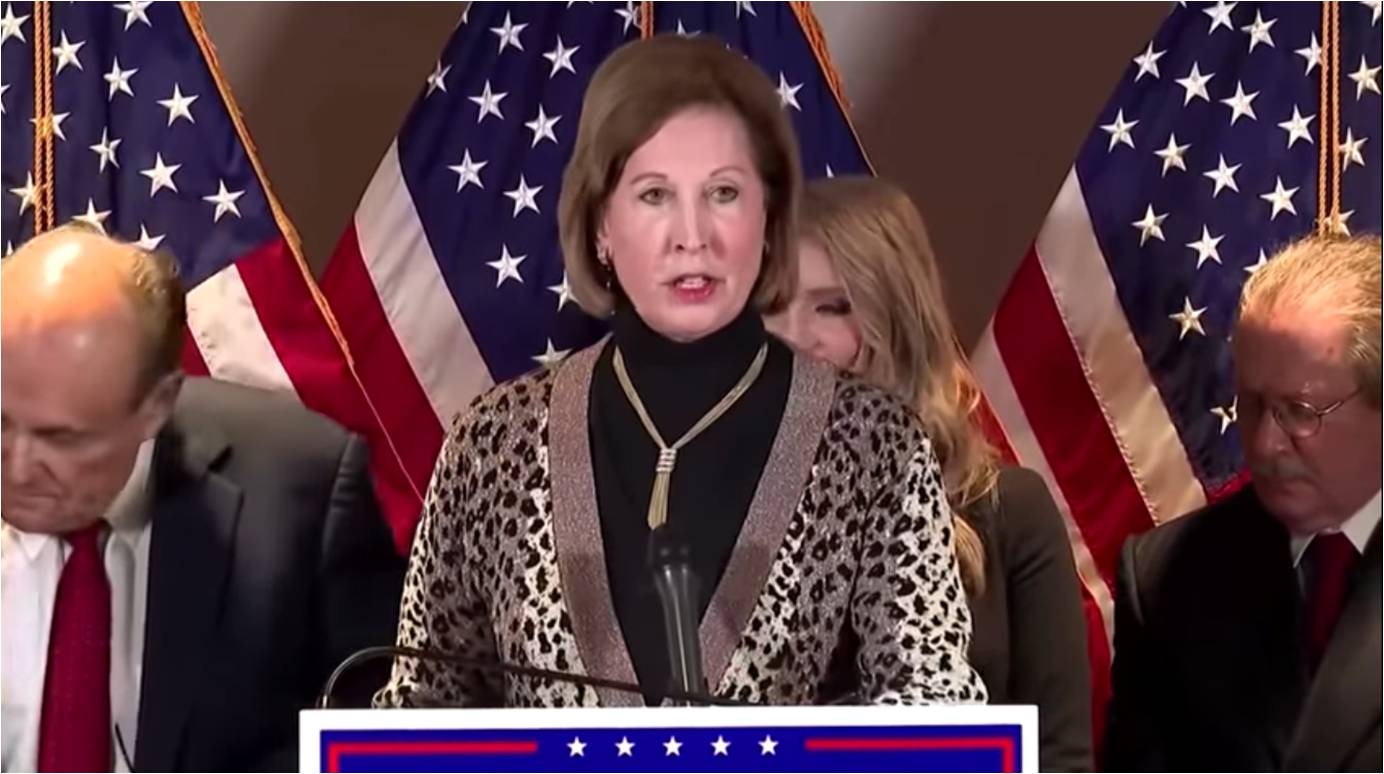 The lawyers working on Trump’s behalf to expose and correct for the massive fraud in the 2020 presidential campaign are working on two parallel (and separately-financed) paths. The immediate effort, the “Rudy Giulani/Lin Wood” path, is to expose enough fraud in the votes themselves to challenge the results on constitutional grounds in federal courts, in order to forestall or overturn certification of the fraud in the challenged states. This is an uphill battle, because the lawyers have had only a very short time (about 6 weeks) to find evidence for and argue their cases.

That’s why the parallel “Sidney Powell” path is so important to the overall effort, because her investigation is focused on the apparently defective Dominion voting systems and their Smartmatic software, which was expressly designed to steal elections (originally, to benefit Venezuela‘s Hugo Chavez).

Here is her Nov. 23 “mission statement”:

“My intent has always been to expose all the fraud I could find and let the chips fall where they may – whether it be upon Republicans or Democrats. The evidence I’m compiling is overwhelming that this software tool was used to shift millions of votes from President Trump and other Republican candidates to [Joe] Biden and other Democrat candidates. We are proceeding to prepare our lawsuit and plan to file it this week [Thanksgiving week]. It will be epic.”

In an interview with Maria Bartiromo, Nov. 15:

“I never say anything I can’t prove.”

At the Nov. 19 press conference featuring three lawyers, Rudy Giuilani, Sidney Powell, and Jenna Ellis, working on exposing the fraud in the 2020 election, Powell elaborated on how the fraud was perpetrated:

“The software itself was created [with] so many variables and so many back doors… one of its most characteristic features is its ability to flip votes. It can set and run an algorithm, that probably ran all over the country, to take a certain percentage of votes from President Trump and flipped them to President Biden, which we might never have uncovered had the votes for President Trump not been so overwhelming in so many of these states that it broke the algorithm that had been plugged into the system. And that’s what caused them to have to shut down in the states they shut down in.”

“…one of the Smartmatic patent holders, Eric Coomer, is on the web as being recorded in a conversation with Antifa members, saying that he had the election rigged for Mr. Biden, nothing to worry about here, and they were going to F Trump. His social media is filled with hatred for the president and for the United States of America as a whole, as are the social media accounts of many other Smartmatic people.”

“We have witnesses [to fraud] to have actually reported to the FBI and nothing’s happened as a result of it.”

In response to a question –

Sidney, speaking of our votes being held and processed [and] tabulated overseas, there was reports that there was a piece of hardware, probably a server picked up in Germany. Is that true, and is it related to this?

“That is true. It is somehow related to this, but I do not know whether good guys got it or bad guys got it.”

In response to a question –

You spoke of unleashing the Kraken. Is the country ready for this? Americans should be astonished what you’re saying here today. Is the country on the verge of an electoral breakdown?

“We’ve already had it… There should never be another election conducted in this country, I don’t care if it’s for a local dogcatcher, using a Dominion machine and Smartmatic software.”

In an interview with Glenn Beck, Nov. 20:

“The servers at Scytl in Germany were confiscated the other day. I’m hearing it was our forces that got those servers. So I think the government is now working on an investigation of what really happened. But we’re getting evidence, also, that there were lines into the servers from four foreign countries — all extremely adverse to the interests of the United States.”

(Reportedly, these servers in Frankfurt might have been inside a secret CIA unit, and they were seized in a raid, by U.S. Army troops, of which neither the CIA nor the FBI was notified.)

Caveat: The U.S. Army has denied there was a raid.

In an interview with Howie Carr, Nov. 20:

“We’ve got a number of smoking guns and we may have to get witness protection for them. We have a lot of extremely solid evidence.”

Sidney Powell talks fluently and in detail about the Dominion systems – so you know she’s got the evidence of fraud and can prove it.

She also drops hints – clues – about other stuff, but with no details, so she is still collecting evidence before she can describe and prove a case.

” …the government is now working on an investigation of what really happened.”

What she’s hinting at here is that, almost invisible to the public eye, there is right now perhaps a gigantic struggle going on at the very top levels of our government – “good guys” trying to investigate and expose the fraud, while “bad guys” try to bury it.

The hundreds of witnesses providing affidavits to the Trump lawyers are small fish in a big pond; they don’t need witness protection.  She’s talking about people inside the government, possibly also Dominion, who have firsthand knowledge of how the fraud was executed, and who did it.

“It is somehow related to” the election fraud, she said (on Nov. 19) about the supposed seizure of the Scytl server or servers. That’s lawyerspeak for: This is significant, but until we learn what’s in those servers we don’t know how significant. Again, she is waiting for evidence before providing any further information.

The purported seizure operation and the seized server or servers themselves, assuming it happened, would be key to unraveling this mystery.

They wouldn’t have been seized if Dominion voting data were just innocuously passing through. They would have been seized because agents believed they would reveal how the fraud was executed, and/or by whom and where it was done, and/or what tools and algorithms were used, and possibly what the vote tallies were before the vote thieves got to work.

They would have been seized with the help of U.S. Army forces (Defense department, good guys).

For the information they contain to be used in nonmilitary legal cases, they would have to be under the control of the Justice department (Bill Barr, good guy).

Neither the FBI (Christopher Wray, bad guy) nor the CIA (Gina Haspel, bad gal) would have had advance warning of this raid. The servers might have been inside a CIA spying facility (not yet confirmed), but even if they weren’t, and assuming something went on, we would have confirmation from Sidney Powell, who said (to Maria Bartiromo on Nov. 15), ” And why Gina Haspel is still there in the CIA is beyond my comprehension. She should be fired immediately.”

If the specter of a huge power struggle is true, it might tie in with Trump’s recent house-cleaning:

Aug 6, 2022 Morgan
Thanks for subscribing! Please check your email for our latest news.