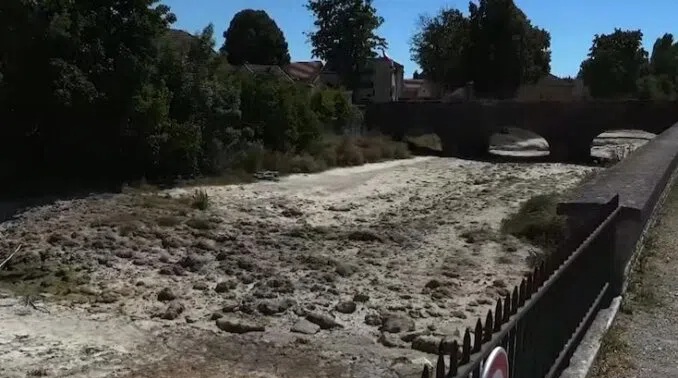 Something sinister appears to be going on with the world’s water supplies as major lakes and rivers across the planet have suddenly dried up for unknown reasons.

Several portions of the Mississippi River have had to be shut down due to record-low water levels. The Nile River in Africa has also declared a state of emergency due to lack of water.

Infowars.com reports: Starting on November 6, Egypt will host the COP27 climate change conference at which nearly 100 heads of state will converge to discuss the dire state of agriculture in this once-fertile region of the world.

The Nile is the primary water source for not only Egypt but also Sudan, South Sudan, and Ethiopia. It is also, like the Mississippi, a vital economic river that supports both agriculture and fishing.

Without water, the world will collapse

The Amazon River in South America is another major water source that faces a severe drought after experiencing several months of too much water due to flooding.

Flood waters from the Amazon destroyed crops and submerged entire communities, only to subside and leave the region dryer than it should be. It remains a catastrophic situation for Peru, Colombia, and Brazil, all of which rely on the Amazon for hydration and economic activity.

In Europe, the Rhine River is seeing similar drops in water levels that, like the Mississippi, have made commerce through some portions impossible.

Europe is also in the throes of a major energy crisis, which is being worsened by the fact that a falling Rhine is making it difficult for Germany to source coal as a last-ditch effort to avoid a lights out situation this dark winter.

“It flows across Switzerland, Liechtenstein, Austria, Germany, France and into the Netherlands where it empties into the North Sea,” one report explains about the importance of the Rhine.

Then we have the Yangtze River in China – the third-longest in the world – which is also drying up like the others. This is causing serious problems for the developing communist regime, which relies on the Yangtze for hydropower.

Reports indicate that the current state of the Yangtze is “record-breaking” in terms of the damage caused by a prolonged drought. This is also impacting shipping along the river, forcing several major companies to suspend their operations.

In the American Southwest, the Colorado River Basin is similarly dry as a bone, putting at risk states like California, Nevada, Arizona, Colorado, Utah, and New Mexico that all rely on this important natural resource for water.

Lake Mead, which feeds Las Vegas, has been consistently dropping to levels never before seen since the time the dam was built. This bodes ominous for major cities like Vegas, Phoenix, and the Los Angeles area of Southern California as well.

The Indus River in Asia is yet another water source that is dwindling away, leaving fisherman with no way to continue their livelihood. For centuries, the Indus has remained a focal point of civilization in South and Central Asia, including in Pakistan where crops that feed 220 million people require water from it.

“There is a spiritual drought that has been devouring America for decades and decades,” wrote one commenter, drawing a metaphor to the current water situation in the United States.