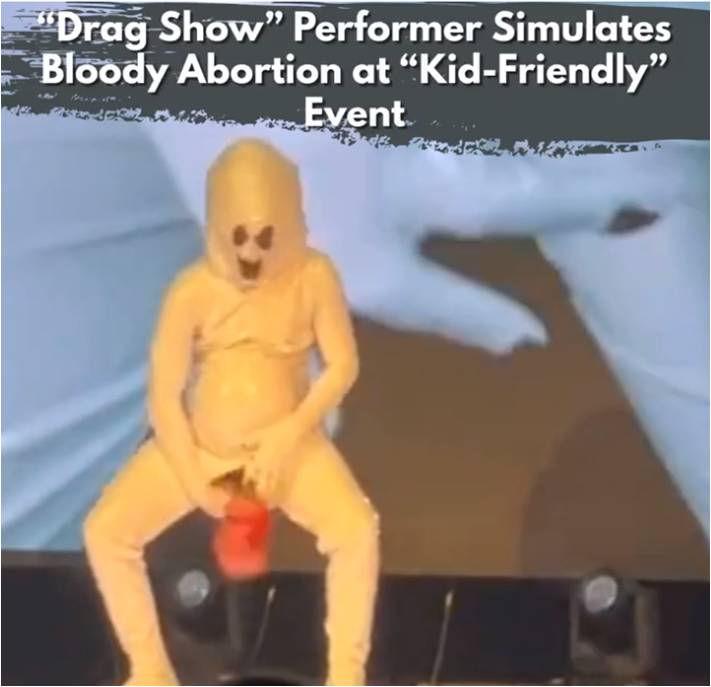 He looked like an evil, nightmarish version of the childhood icon Gumby; perhaps it was intentional?

Over the holidays, multiple venues across Florida hosted “A Drag Queen Christmas” — a touring show which was marketed to “all ages” and unsurprisingly, contained manifestations that were grotesque and macabre to the nth degree. Frankly, you’d only expect to see these sort creations in Frida Kahlo’s “Girl With Death Mask (She Plays Alone)” or anything by Zdzisław Beksiński.

‘Deeply unsettling’ doesn’t even begin to describe the horrors, which truly transcend the bounds of comprehension.

Watch a video clip of the event below:

Children were in the audience.

Dr. Melissa Martin, a former child therapist penned a piece published at LifeNews, which highlighted a subsurface reality. Under the direction of Governor DeSantis:

The Florida Department of Business and Professional Regulation (DBPR) issued a letter to Plaza Live proprietors [the entities leasing out the venue] that promised to take disciplinary action if the venue violated Florida state law by exposing children to sexually explicit performances.

Martin then posed this question:

Why would a business risk being shut down when all they have to do is prohibit minors from attending adult entertainment shows? It doesn’t make sense unless you allege the issue is a covert setup by child predators and pedophiles. Why push the envelope unless there is a bigger goal?

Well, we all know there’s a “bigger goal.”

As Thomas Paine rightly noted in Common Sense, “government even in its best state is but a necessary evil.” When a “necessary evil” government cares more about protecting children than the children’s own parents, things are utterly inverted.

What kind of an adult finds this sort of performance entertaining or uplifting? Furthermore, what kind of adult exposes a child to such horror? As Martin says, “a deranged individual.”

Or how about some introspection? Martin also asks (and answers) this rhetorical question:

What type of society allows children to be traumatized by an adult male predator in a scary costume on a stage as he simulates a bloody abortion? A sick society.

Will the parents notice when the “performers” wheel in a functioning replica of the Moloch idol, light the fire, and bring in the priests with drums? Maybe, maybe not.