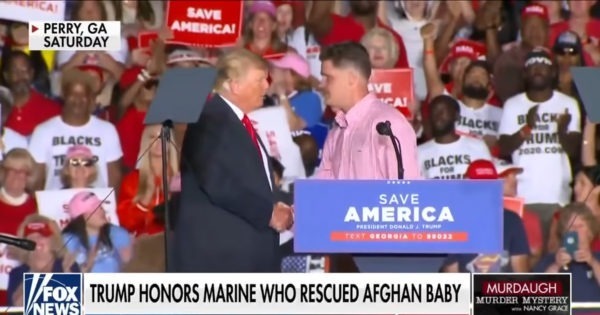 “I am the guy that pulled the baby over the wall.” With pride, the Marine added, “It’s definitely probably one of the greatest things I’ve done in my entire life.”

The U.S. Marine who served at the Kabul airport in wartorn Afghanistan during the worst moments of Joe Biden’s deadly withdrawal is now under investigation after appearing on stage at a political rally held by 45th President Donald Trump.

Clark introduced himself, “I am the guy that pulled the baby over the wall,” and, with apparent pride, said “it’s definitely probably one of the greatest things I’ve done in my entire life.” Clark thanked the crowd for their support, and said he is happy to be home in Georgia. He did not explicitly endorse President Trump or any other candidate for political office and he was not in uniform.

“The 24th Marine Expeditionary Unit (MEU) has initiated a command investigation regarding LCpl Hunter Clark’s attendance at the event last weekend to determine if any DoD policies were violated,” Capt. Kelton J Cochran, a Marine spokesman said. “Any details pertaining to this incident are not releasable while the investigation is being conducted.”

Cochran has yet to explain “what policies that Clark may have violated,” notes Task & Purpose, “but the Defense Department does not allow active-duty troops to ‘speak before a partisan political gathering, including any gathering that promotes a partisan political party, candidate, or cause.’”

The Biden White House was humiliated on the international stage after it abandoned President Trump’s withdrawal agreement, ultimately resulting to a chaotic scene at the Kabul airport where large numbers of Afghan civilians and some U.S. citizens were slowly evacuated over days. Despite the deadly withdrawal and political failure in Afghanistan, Democrats intend to send $64 million in foreign aid to the Taliban-controlled country.