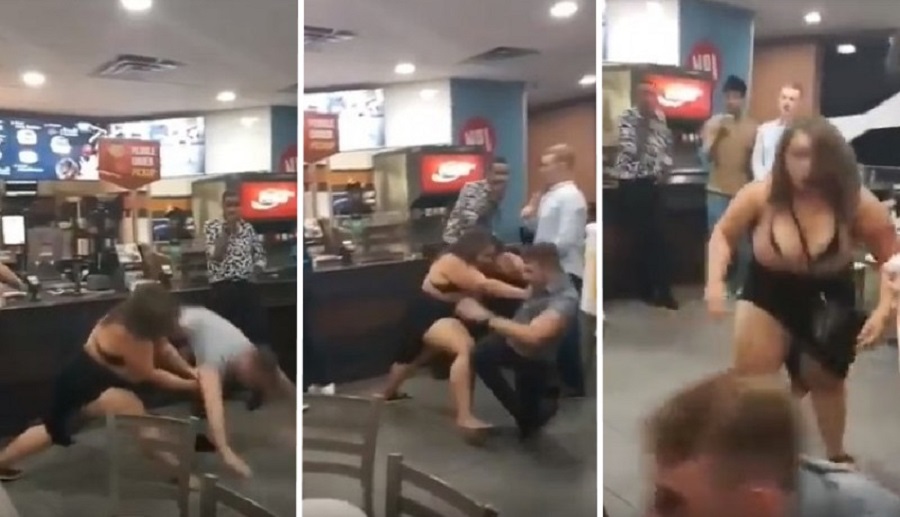 In one of their many slogans over the years, McDonald’s said “Lovin beats Hatin,” but it doesn’t seem their patrons are “McLovin it” or living by the moto at all. Proving just that is a video which has emerged of yet another McDonald’s melee. This time, it’s a skinny guy who’s thrown around like a rag doll by a very voluptuous woman set on giving him a vicious beat down.

Like many of the public brawl videos to spread across the internet, not much is known about the people involved or even the specific location of this McDonald’s melee. However, it only takes a mere 5 seconds to give us plenty to talk about when it comes to this french fry induced feud.

From the very start, it’s obvious a woman isn’t too happy with a man standing at the counter. Although she appears half dressed, we soon realize it’s an unfortunate wardrobe selection of a flesh-colored tank top paired with a black skirt. But, the woman’s attire isn’t the focus for very long.

Instead, viewers are immediately left jaw-dropped by her seemingly beastly strength as she grabs the slender guy in the grey shirt by his arm and easily flings him to the floor. Unfortunately for him, she wasn’t done, either. A second and third push ensue, knocking the bewildered beau back to the ground every time he tries to regain his footing.

This woman simply won’t let up and just keeps charging him like a bull. As the clip draws to an end, she’s seemingly going back for more as her target scrambles to get to his feet after being flung into a table and chairs. The abrupt ending leaves many viewers asking where the full clip is, but a search of the world wide web didn’t render any results. However, a second look at the clip provides even more fast food fighting.

The bountiful brunette beating on the skinny guy is not the only action taking place. In the background, another woman seems to be letting a second guy have it too. Although, she doesn’t seem to be as much of a brute as the other, larger woman. Dressed in black, she initially appears to be just running her mouth at another man, who’s also clad in dark colors.

But, as the first chick is giving the first guy a throw down, the second woman in the background gives the other guy a what for, too. After appearing to attempt to push and possibly even slap or punch him, she stands defiantly with a finger in his face as everyone is distracted by the scene taking place in front of them. The poor dude appears confused with his hands up in a “don’t hit me” stance, likely hoping he’s not going to end up getting the beating his buddy is suffering.

We can only wonder what caused such chaos to ensue. However, I struggle to imagine a legitimate reason to turn what’s supposed to be a family-friendly fast food restaurant into the scene of a “Royal Rumble.” What’s more, it appears both men were just trying to get away, so the physically violent onslaught from the so-called ladies is hard to justify. We can only hope that, as the video spreads across social media, those involved will be held accountable for what they did.

Although it might be briefly entertaining to watch, this behavior is completely unacceptable. Imagine trying to get your food and being greeted by a scene like this. The likelihood is that there were people in this restaurant trying to enjoy a meal with their children, who don’t need to be exposed to a McDonald’s melee with their “Happy Meal.” I’m sorry, but I’m not McLovin’ the public displays of thuggery. When I just want a Big Mac, I do not want to witness a full-on attack by a feral female.

Oct 3, 2022 Morgan
Thanks for subscribing! Please check your email for our latest news.