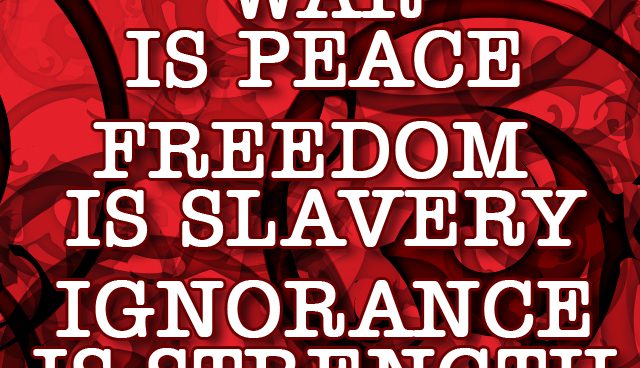 Last week, Financial Times Associate Editor Edward Luce tweeted that Republicans are the most “dangerous” political force in the world, bar none. “I’ve covered extremism and violent ideologies around the world,” he said, and “I have never come across a political force more nihilistic, dangerous & contemptible than today’s Republicans. Nothing close.” Former CIA Director Michael Hayden chimed in immediately and said, “I agree.”

This past Tuesday, Democrat adviser Kurt Bardella called all Republicans a “domestic terrorist cell.” MSNBC’s Tiffany Cross agreed and said there should be no distinction between Republicans and “right-wing extremists.” At the same time, Peter Wehner, a contributing writer for The Atlantic, likened the Republican Party to a “dagger pointed at the throat of American democracy.” All this while the FBI Director Christopher Wray added that any American flying the Gadsden — “Don’t Tread On Me” — flag is suspect of violent extremism.

Does anyone except me hear the ghost of George Orwell laughing right now?

Does it concern you that a group of Democrats holding power is now defining all Republicans as being “right-wing extremists” and a “threat to American democracy?”

And by the way, what is a right-wing extremist? Is it someone who advocates for pro-life legislation? Is it someone who believes in traditional standards of sexual morality? Are you a right-winger if you believe in lower taxes? Are you an extremist if you dare to call for open debate on environmental policy? Are you a threat to American democracy if you think enforcing America’s borders will actually be good for America? Are you one of those “nihilistic, dangerous & contemptible” people “holding a dagger to America’s throat” if you believe in school choice and the self-evident reality of parental rights?

Isn’t it a bit convenient that Big Brother has decided that all Americans with a “Republican” bumper sticker on their car versus those who obediently parrot the beltway propaganda of George Soros are a security risk?

And what about these smart folks on the left? Is their thoughtless embrace of critical race theory a security risk? How about their endless printing of monopoly money and the consequent degrading of U.S. currency? Does this enhance or impede American democracy? Does their embrace of the neo-Marxism of Black Lives Matter endanger our freedom? Does their infatuation with sexual nihilism make America’s women and children feel more or less secure? And how about “climate change” and “green” economics? Does their religious zeal for the disproven pantheism of former Vice President Al Gore enhance our national security or hurt it? Finally, let’s consider their post-modern aversion to any robust debate concerning everything above; is their intellectual foreclosure not nihilistic and extreme?

Oh, a final question: How about their ad hominem attacks of calling 50% of the American people derogatory names? Isn’t such ignorance of the elementary principles of Socratic logic a bit dangerous? Do you feel more secure knowing that some bureaucrat or politician at the highest levels of political power can unabashedly pigeonhole any person holding a conservative worldview as a compromise to national security? Do you feel safe knowing that this tactical use of rhetorical sleight of hand is actually accompanied by a straight face — or perhaps a sly grin?

This betrayal of classical liberalism is simply incredible. And I mean this in the technical sense of the word. These worn-out political attacks lack any credibility. Our nation’s political class and their obedient media lapdogs make no sense. They disregard any elementary understanding of freshman-level logic. Their rhetoric is foolish. And when caught on the horns of their duplicitous dilemma, their only reaction is to shoot the messenger and ignore the message. “All Republicans are right-wingers,” they shout. “Anyone who disagrees with us is a security risk, a deplorable, and thoughtless rube!” This narcissistic nonsense lacks any credibility. It is simply in-credible!

A free society that remains silent while George Orwell‘s “1984” unfolds before its very eyes will not remain free. Our nation’s elites are hell-bent on completely restructuring the socio-political context of our country, and in their zeal, they are labeling anyone who challenges them a “dangerous, contemptible, terrorist.”