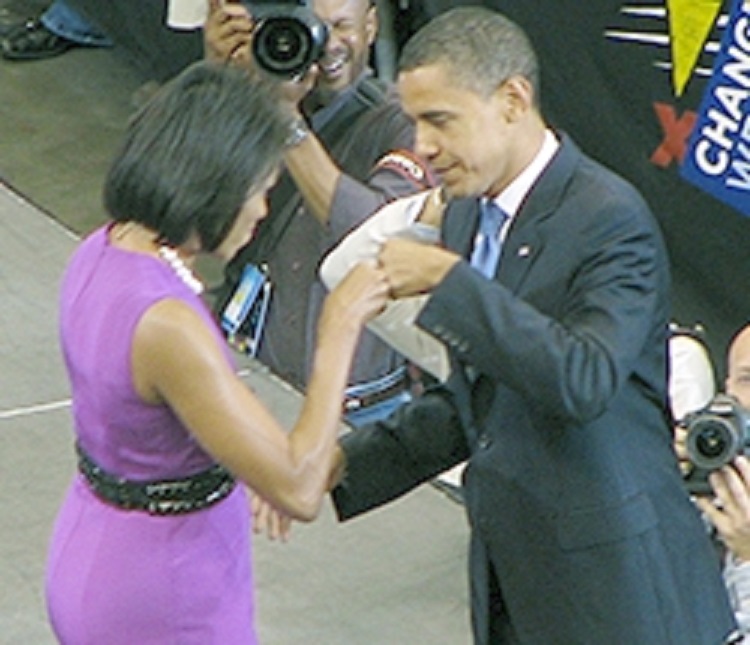 On Friday’s broadcast of “CBS This Morning,” Michelle Obama made the delusional claim, one among several, that “many of us still live in fear as we go to the grocery store, or walking our dogs, or allowing our children to get a license.”

Had Michelle attributed that fear to a wariness of black drive-by gang bangers or street muggers, it might have made some sense. But her fear, she implied, was of racist police.

Barack Obama knows better, but he has lived in fear as well. That fear deformed his presidency and sent the nation spiraling down a lethal rabbit hole that has benefitted no one more than the Mao-loving matrons of BLM.

Not surprisingly, as I learned in researching my forthcoming book, Barack Obama’s Promised Land: Deplorables Need Not Apply, there is no one Barack fears more than wife Michelle, his personal emissary from the world of authentic African-Americans.

In a May 2011 interview, activist professor Cornel West nailed Obama on this fear. “All he has known culturally is white,” said West. “He is just as human as I am, but that is his cultural formation. When he meets an independent black brother, it is frightening.”

Obama had reason to be frightened. Following a Father’s Day speech by Obama at a largely black Chicago church in 2008, Jesse Jackson was heard on a hot mic at a Fox News studio saying, “See, Barack been, um, talking down to black people on this faith-based—I wanna cut his nuts out.”

Here Jackson made a sharp slicing motion with his hands and continued, “Barack—he’s talking down to black people—telling n*****s how to behave.”  In the original, as one might expect, Jackson did not speak in asterisks.

Obama had made the rookie mistake of attributing the absurd crime rate in America’s black neighborhoods to fatherlessness. Jackson, Chicago’s most prominent baby daddy, suggested that a leftward course correction was in order, and Obama cravenly obliged him.

Obama does not talk about Jackson’s comments in his memoir, A Promised Land. That’s a shame. Team Obama’s behind-the-scenes response to the Jackson threat might have enticed even a Republican or two to buy the book. What seems clear, though, is that Jesse Jackson’s very authenticity scared Obama. When Jackson ran for president in 1988, no one questioned his birthplace or his roots or his eligibility.

Like Obama, the biracial quarterback Colin Kaepernick had grown up in a white household, and was, if anything, more confused about his identity than was Obama. Said Kaepernick, forgetting for a minute his $12 million salary and his black president, “I am not going to stand up to show pride in a country that oppresses black people and people of color.” Kaepernick said this in the eighth year of the Obama presidency.

Kaepernick’s protest gave Obama an excellent opportunity to tell the troubled young athlete what he told the parishioners at the Apostolic Church on Father’s Day 2008. “If we are honest with ourselves,” said Obama eight years earlier, but honest he never quite managed to be.

In his memoir, Obama does not once use the word “murder” in an American context. Michelle does. In her memoir, Becoming, she laments Chicago’s appalling murder rate, adding indignantly, “It goes without saying that nearly all those victims were black.”

True to form, she makes no mention of who killed them or why. Most of the victims she mentions by name are the ones who were killed by the police or in police custody, including Ferguson’s Michael Brown. “All this,” she writes, “was evidence of something pernicious and unchanging in America.”

With Obama refusing to tell the truth about Trayvon Martin’s 2012 death in Florida, a trio of Marxists formed Black Lives Matter. With Obama refusing to tell the truth about Michael Brown’s death two years later in Ferguson, BLM and its allies intimidated cops into pulling back from active policing. Thugs filled the void, and the murder rate shot up the charts with a bullet. Thanks to the so-called “Ferguson effect,” three thousand more people, the majority of them black, were murdered in 2016 than in 2014.

“How many times in the last year has this city lost a child at the hands of another child?” asked Obama at that Chicago church on Father’s Day 2008. Well, in 2016, a record 784 people were murdered in Chicago alone, a 57 percent increase over 2015.

With Obama out of power, BLM lay more or less low for the next three years, and homicides declined nationwide. But its activists, joined now by Antifa, had mastered the theater of grievance. They exploited the bad optics of chronic felon George Floyd’s drug-induced death to radicalize the young and to scare corporate America into further submission.

In his lengthy, feckless tweet following Floyd’s death, Obama reminded black Americans that for them, “Being treated differently on account of race is tragically, painfully, maddeningly ‘normal.’” Michelle skipped the nuance. “Race and racism is a reality that so many of us grow up learning to just deal with. But if we ever hope to move past it, it can’t just be on people of color to deal with it,” she tweeted. She then listed, as if martyrs, a string of black people who died resisting arrest all the way back to “Michael,” no last name needed.

While America burned, the Obamas found safe harbor in their promised land, Martha’s Vineyard. As it happened, their new manse cost them exactly one year of Kaepernick’s annual salary, $12 million. For less fortunate African-Americans, the cities offered no such sanctuary. Murder in 2020 increased at a shocking 37 percent clip over the year before, the victims and victimizers disproportionately black.

Of course, it did not have to be this way. In 2008, America handed Obama an extraordinary opportunity. Had he the courage to repeat his Father’s Day address in every relevant venue, he would have forced his followers to understand the source of the pathologies that plagued American cities.

Instead, he and Michelle encouraged them to read “race” into every slight, every disparity, every grievance, real or imagined. His cowardice pulled the nation apart and drove the homicide rate upward. Deception was his strategy and division his legacy. Few people will remember TARP or Obamacare or Dodd-Frank or even Benghazi, but no one forgets the murder of a loved one.