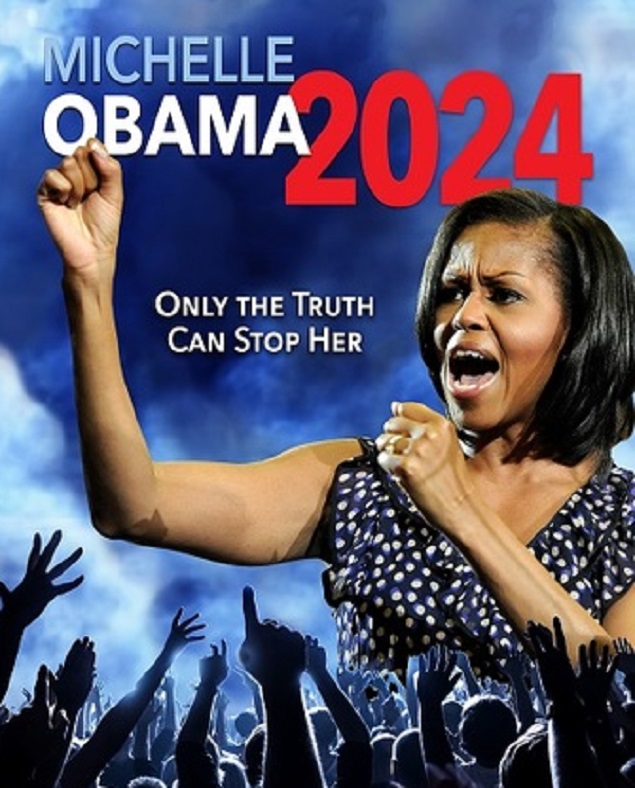 It was the gasp heard round the world. “They could run Michelle Obama, and if they do …” said Monica Crowley before the CPAC 2022 audience reeled audibly in shocked recognition, cutting her off in mid-sentence.  Crowley had seen an early screener of my upcoming film and book of the same name, Michelle Obama 2024: Her Real Life Story and Plan for Power, which will be released on July 11.  Crowley was not trying to make waves at CPAC.  She was trying to send a warning.

The CPAC crowd, and conservatives in general, have failed to realize that the ever present Michelle Obama was a potential Democrat presidential candidate.  This is largely because Michelle Obama launched a cover story for her intense political activity back in 2008 that goes like this: “Michelle hates politics.”  The media have faithfully sustained the ruse — when they discuss likely Democrat contenders in 2024, they typically leave Michelle off the list.

The Obamas needed this cover story to undo the damage that the increasingly shrill Michelle was doing to her husband’s campaign in 2008.  In February of that year, when she told a crowd in Madison, Wisconsin, “For the first time in my adult lifetime I’m really proud of my country,” Barack’s advisers knew they had to reel her in.  In the days following, the angry Chicago culture warrior mellowed into the amiable “Mom in Chief.”

For those who have monitored the Obamas closely, as I have, the plot to elect Michelle president has been obvious since at least 2016.  Michelle has been following a formula scarily like the one that got Barack Obama elected president.  Like her husband, Michelle served as the keynote speaker at a Democrat Convention.  Barack’s 2004 breakout speech introducing John Kerry made him a viable candidate four years later.  Michelle’s 2020 speech on behalf of Joe Biden established her as the favorite next nominee.

Next, Barack Obama based his candidacy on his personal story, as captured in his 1995 autobiography, Dreams from My Father.  Michelle is basing her candidacy on her wildly popular 2018 memoir, Becoming.  Conservatives failed to notice that Michelle was selling out arenas around the country, ostensibly to promote the book, but in reality to solidify her political ambitions.  There was scarcely a talk show she did not appear on, and, if that were not promotion enough, Netflix turned Michelle’s life story into a movie.

Finally, Barack started in politics by running a voter registration drive called “Project Vote.”  Michelle now aggressively runs “When We All Vote,” a project designed to showcase Michelle’s leadership and remind voters of her solid skills at reciting Democrat talking points.  The showcasing has worked.  Michelle Obama is a genuine pop culture phenomenon.  Like Oprah or Madonna, she scarcely needs her last name anymore.  She has more than 21 million Twitter followers, 48 million on Instagram, and 18 million on Facebook.

The one thing that can stop Michelle’s drive to the White House is the truth about Michelle herself.  She is not who she pretends to be, and she knows it.  As I show in Michelle Obama 2024, Michelle repeatedly refers to “imposter syndrome” in describing her own ascent to stardom, though she pulls short of detailing the ways she has deceived the nation and herself all these years.

“After weeks of careful preparation,” writes Michelle in Becoming of the 2008 Democrat National Convention, “I walked onstage at the Pepsi Center in Denver in late August and stood before an audience of some twenty thousand people and a TV audience of millions more, ready to articulate to the world who I really was.”

But who was Michelle, really?  Did even she know?  She claims to have spoken to America in her “own voice” and with her “own words,” but if she really wanted help finding her own voice, she might have used her own words.  Instead, she relied on a white twenty-seven-year-old speechwriter, Sarah Hurwitz, a Harvard Law grad and Judaism scholar.

To soften the ground just prior to Michelle’s convention speech, the Obama campaign displayed before the crowd a sweet short film, narrated by her mom, Marian Robinson, entitled “South Side Girl.”  Throughout the campaign, Michelle had used the “South Side” metaphor the way William Henry Harrison had used the log cabin in his 1840 presidential campaign.  “She was very committed to the South Side of Chicago,” Harvard prof Charles Ogletree said in the film.  “She was very committed to using every bit of her skills and talents to lift others up.”  In truth, Michelle had been running from the South Side since she was old enough to attend kindergarten, and that included an illegal elementary school registration out of district to avoid lower-class Black kids.

Michelle’s convention speech was well crafted. She and Hurwitz laid out ample doses of Michelle’s and Barack’s working-class roots and Joe Biden’s as well.  To fit the larger Democrat narrative, Michelle reinvented her career to try to cancel her “first time proud of my country” faux pas.  “In my own small way,” she told the enthralled crowd, “I’ve tried to give back to this country that has given me so much.  That’s why I left a job at a law firm for a career in public service, working to empower young people to volunteer in their communities.”

In fact, I discovered, Michelle left her law firm job hoping to find less stressful legal work at the University of Chicago.  When that cushy opening did not materialize, she took a job at City Hall helping White developers and their political friends clear poor Blacks out of valued real estate.  Having proven her callousness toward the Black community, Michelle was promoted handsomely to perform a similar service for the White elite at the University of Chicago Med Center, literally steering poor Blacks away from the modern hospital E.R. and into dumpy storefront clinics.  “Lifting people up” is a much less apt description of her work function than “selling people out,” specifically those in Chicago’s Black community.

The trickiest part of Michelle’s convention speech was to neutralize her self-inflicted image as “an angry Black woman who didn’t love her country.”  This took some finessing.  To begin, Michelle identified herself with a sundry assortment of people.  These included the unlikely trio of Martin Luther King, Hillary Clinton, and Joe Biden, all of whom were allegedly “driven by a simple belief that the world as it is just won’t do — that we have an obligation to fight for the world as it should be.”  Michelle’s recognition of this fighting spirit was — drum roll, please — “why I love this country.”

The audience failed to recognize that Michelle pulled the “world as it should be” quote from Saul Alinsky’s Rules for Radicals and repeated it five times in her speech.  And Alinsky was the least worrisome of Michelle’s radical affiliations.  It was she who pushed her husband into the arms of the Rev. Jeremiah Wright.  And it was Michelle who worked with the Weather Underground terror group’s Bernardine Dohrn at her law firm and got tight with her and hubby Bill Ayers.  Michelle, in fact, recruited Dohrn as the  first sponsor in her Public Allies program and recruited Ayers to speak at the University of Chicago.  Until Barack’s Senate run in 2004, the two couples had dined together weekly for years.  And it was Bernardine Dohrn who schooled Michelle on “the politics of fear” that she recited almost verbatim on the 2008 campaign trail.

In 2008, with an able assist from the media, Barack Obama was able to conceal his radical connections and sell himself to the nation as a racial healer.  Michelle lacks the temperament to pull off that scam.  But do the Democrats have a choice?  Events of the past year and a half have made Michelle the most practical candidate.  Her name recognition and popularity will put her atop the polls once her name is introduced, and even Republicans will be terrified of criticizing her.

However, the truth can stop her.  As Michelle Obama 2024: Her Real Life Story and Plan for Power becomes viewed and read around the country, Michelle will have to answer for selling out and exploiting the Black community she is now pretending to care about.  That’s a sales job not even the media can help Michelle overcome.

Hollywood film director Joel Gilbert is president of Highway 61 Entertainment.  Among his many films are political documentaries including The Trayvon Hoax: Unmasking the Witness Fraud that Divided America; Trump: The Art of the Insult; There’s No Place Like Utopia; Dreams from My Real Father; Atomic Jihad; and Farewell Israel: Bush, Iran and the Revolt of Islam and the new film and book MICHELLE OBAMA 2024: Her Real Life Story and Plan for Power.

2 thought on “Michelle Obama Is Running for President in 2024”