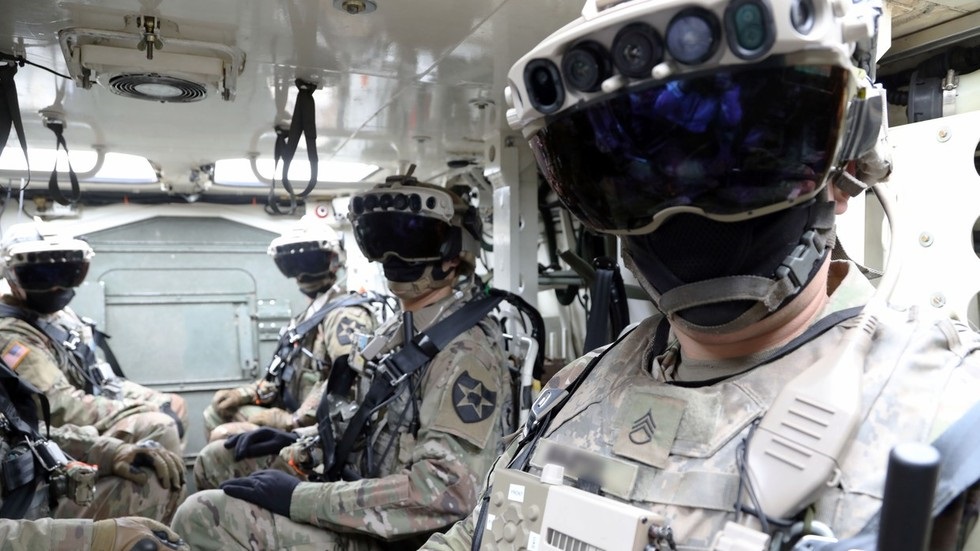 The Pentagon will pay Microsoft billions of dollars to build augmented-reality headsets for its soldiers. The devices will be backed by the tech firm’s Azure cloud computing services, which was compromised by hackers last year.

The contract was announced on Wednesday and could earn Microsoft up to $21.88 billion over 10 years. Back in 2018, the US Army gave Microsoft $480 million to develop a prototype headset built around the company’s HoloLens technology. Based on its performance, Microsoft will now provide up to 120,000 of the headsets, dubbed the Integrated Visual Augmented System, or IVAS.

The IVAS can project holographic video-game style maps, thermal and night imaging, and target-identification information to soldiers. It can also show where the soldier’s weapon is aimed, and monitor vital statistics like their heart rate.

However, the project is not without its problems. A CNBC reporter tested the prototype headset in 2019 and described it as “a bit buggy,” saying that it needed to be restarted during a demonstration session. Several months later, the military was still reporting glitches with the devices, including GPS and imaging errors, and “poor low light and thermal sensor performance.”

While Microsoft will have a decade and more than $20 billion to iron these issues out, there could be more potential snafus on the horizon. The headsets will be linked to Microsoft’s Azure cloud computing service, a service that the company said was hacked last December, leaving 911 emergency lines down in multiple US states. Even before that particular breach, security researchers were finding flaws with Azure, with one branding it a “cloud security nightmare.”

Despite this, the US military seems confident. Microsoft was awarded a $10 billion cloud computing contract by the Pentagon last October, beating out rivals Amazon and Google in the competition. Amazon has since filed a lawsuit, arguing that former President Donald Trump – a fierce critic of Amazon CEO Jeff Bezos – intervened to land Microsoft the deal.

Back in 2018, Microsoft President Brad Smith pledged the company would “provide the US military with access to the best technology… all the technology we create. Full stop.” However, not all of his employees felt as enthusiastic.

While Smith described the military as “ethical and honorable,” more than 90 Microsoft employees signed a letter in early 2019 protesting the development of the IVAS headsets.

“The application of HoloLens within the IVAS system is designed to help people kill,” they wrote. “It will be deployed on the battlefield, and works by turning warfare into a simulated ‘video game,’ further distancing soldiers from the grim stakes of war and the reality of bloodshed.”

The employees said that they “did not sign up to develop weapons,” and demanded more control over “how our work is used.”

Whether Microsoft persuaded or ignored these disgruntled employees, the IVAS project is now a reality, and worth 44 times as much money as the prototype. Yet as Big Tech and the military grow ever closer, similar campaigns within Microsoft’s competitors have been more successful. Google dropped out of an AI contract with the Pentagon in 2019 after employees spoke out against their software being used to help target drone strikes. Employees at Apple and Amazon have also pressured their bosses not to help the US military.