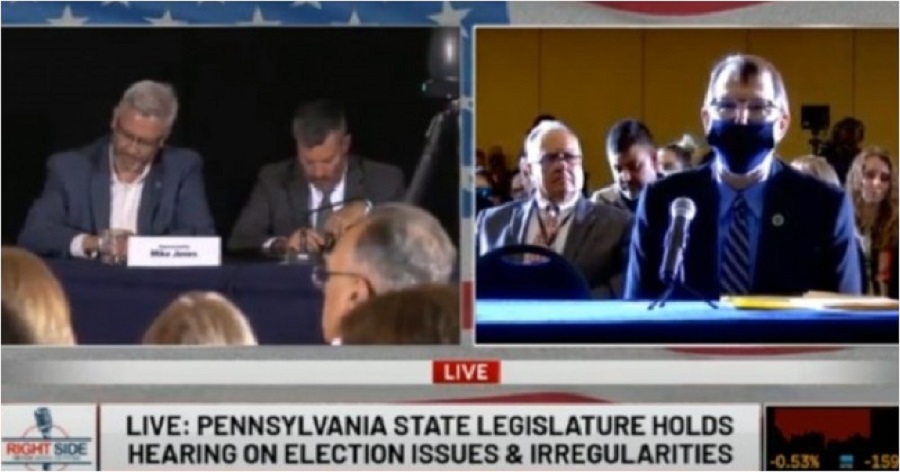 On Wednesday, the Pennsylvania state legislature held a public hearing on “election issues” which was attended by Trump’s legal team including Rudy Giuliani and Jenna Ellis. However, it was one military officer who dropped a bombshell allegation about a 600,000 voter spike that caused the entire audience to gasp. Don’t miss this.

The Pennslyvania state legislature held a public hearing at the Wyndham Gettysburg Hotel on Wednesday. Senator Doug Mastriano (R) started off the hearing by making a statement on the disputed claims of election fraud.

“Elections are a fundamental principle of our democracy – unfortunately, Pennsylvanians have lost faith in the electoral system,” said Mastriano, who recently called for the resignation of State Department Secretary Kathy Boockvar for negligence and incompetence. “It is unacceptable.”

“Over the past few weeks, I have heard from thousands of Pennsylvanians regarding issues experienced at the polls, irregularities with the mail-in voting system, and concerns whether their vote was counted,” said Mastriano. “We need to correct these issues to restore faith in our republic.”

By far, the star of the show was retired Colonel Phil Waldron, who reported on irregularities involving “computer voter spikes.”

“I spent all of my time as an operations officer,” Waldron said. “My perspective looking at this problem set is how to break in, how to destroy it, and how to manipulate it.”

“My team has been researching this specific issue since August but we are also working with another team that is working on the voting machine manipulation for two years,” the retired colonel explained.

“Our experts and other professionals believe over 1.2 million Pennslyvania votes could have been altered for fraud,” he claimed. “This is what we discovered in the last 22 days.”

Waldron advised that only a “detailed forensic analysis” could determine how many Pennsylvania citizens had their “civil rights violated.”

Waldron then dropped a bombshell.

He directed those at the hearing to take out a chart. “So, what our team has done is to focus on the spike anomalies,” he said while holding up the chart.

“These are events where a numerical amount of votes are processed at a time period that’s not feasible or mechanically possible,” Waldron explained. “These spike anomalies really show us where to look forensically.”

One of the spikes around 4 a.m. on Election Night shows a spike of 600,000 votes being processed.

“Close to 600,000. I think our numbers were 570 some odd thousand that all those spikes represent over time,” Waldron said.

“And how much for Trump?” Guiliani asked.

The attendees gasped in disbelief.

Waldron’s testimony starts at around 1:23:10 in the video:

Waldron explained that in a normal election you would typically see a gradual curve on the chart and spikes are an indicator of fraud, in his opinion. However, it’s also a disputed opinion.

We cannot move this country forward without a real forensic audit of those states that are reporting similar findings. So, pass this information along. Only when we get to the bottom of these irregularities can we know what remedy to take to restore confidence in our election integrity.