Moment black man, 27, armed with a knife was shot FOURTEEN times by two Philadelphia cops responding to a domestic – sparking night of BLM riots and looting 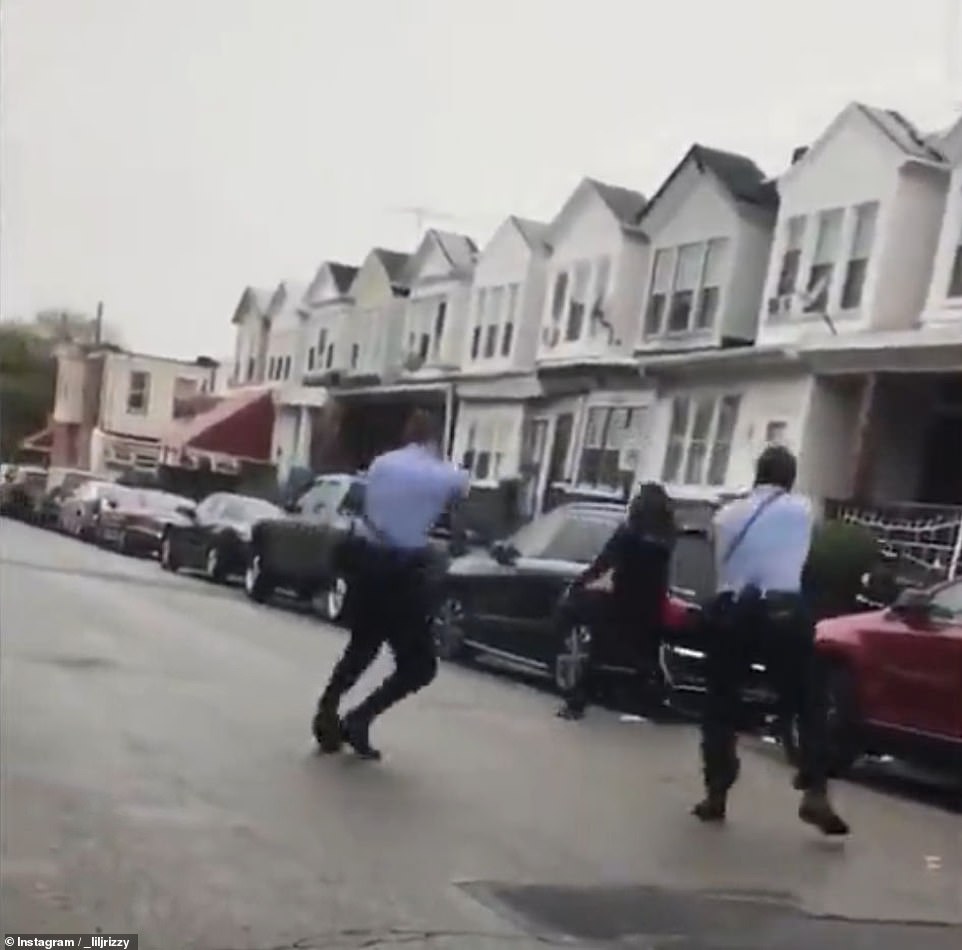 Police officials have revealed that two officers fired seven shots each at Walter Wallace Jr, a 27-year-old black man who was killed while approaching them with a knife.

At a press conference on Tuesday, Philadelphia Police Chief Danielle Outlaw revealed new details in the case, which left the city rocked by protests after Wallace’s death on Monday afternoon.

Outlaw said that the two cops, who have not been publicly identified, fired a total of 14 shots, or seven each, at around 4pm Monday when officers were called out to reports of a domestic incident at Locust and South 61st streets in Cobbs Creek, West Philadelphia.

Police officials said it was yet to be determined how many bullets struck Wallace. An attorney for his family claimed he was struck 10 times.

‘There are many questions that demand answers. Residents have my assurance that those questions will be fully addressed by the investigation,’ Outlaw said.

Outlaw also blasted the overnight violence in Philadelphia that followed the shooting, saying that there had been 91 arrests for looting and rioting, including 76 arrests for burglary, 11 assaults on police and eight police vehicles damaged, with one set on fire.

Thirty officers were injured in the violence, of whom 29 have been treated and released, Outlaw said. Most of the injuries were caused by projectiles thrown by demonstrators.

The female sergeant who remains hospitalized suffered a broken leg after an individual in a pickup truck intentionally ran her over, Outlaw said.

‘Yesterday, people throughout the city came together to peacefully protest. The criminal activity that occurred was not a part of these protests and it did not serve any legitimate purpose,’ Outlaw said.

Chief Inspector Frank Vanore said he could confirm that police received a call about a man screaming, and that the 911 caller said he was armed with a knife. Police are still determining who placed the call and hope to interview them.

Philadelphia will deploy additional police officers to the streets on Tuesday in anticipation of another night of unrest.

The officers had not been interviewed as of Tuesday afternoon, Outlaw said. Neither officer had a Taser or similar device, with Outlaw saying the department has previously asked for funding to equip more officers with those devices.

Philadelphia Mayor Jim Kenney said the video of the shooting presented ‘difficult questions’ about the actions of the officers and that he understood the struggles of the Black community, who he said he suffered from systemic racism.

But he also expressed sympathy for the business owners whose shops were damaged and said the law would be enforced.

‘Vandalism and looting is not an acceptable form of First Amendment expression,’ Kenney told the briefing, referring to the Constitutional amendment guaranteeing freedom of speech.

Bystander footage shows the cops shouting at Wallace to ‘put the knife down’ and him walking with his arm out before the two cops offload a hail of bullets into his body.

Philadelphia police said Wallace had a knife and didn’t comply with officers’ demands to drop it. The man’s family said he had mental health issues and was on medication.

The cops involved in the shooting have not been identified but the footage appears to show they are two white males.

Wallace’s death is just the latest in a string of police killings of black men and women across America in recent months, with another black man shot dead outside a liquor store in San Bernardino just four days earlier.

The deadly shooting unfolded when the two officers responded to a domestic call around 4 p.m. in the predominantly black neighborhood in the city.

The footage shot on a witness’s smartphone begins with Wallace walking between parked cars outside the front of homes in the residential neighborhood.

A woman, later identified as his mother, is following him trying to get hold of him as shouts ring through the air.

Two officers have their guns pointing at him as he heads in the direction away from them.

‘Yo this is crazy out here,’ the person behind the camera is heard saying of the commotion.

The footage moves off Wallace to the cops with one in the road and another on the pavement a little way up the street.

The cops begin backing up as Wallace re-emerges in frame walking between other cars into the road toward them.

The officers continue to back away from him in the road, with their guns still drawn as Wallace walks toward the officers with his arm outstretched.

Wallace continues walking toward them and both officers open fire, with at least seven shots heard. Wallace then collapses in the street as screams ring out.

His mother runs over towards her son with her arms in the air, hysterically screaming ‘no’. She then appears to throw something at one of the cops.

Several other bystanders also rush over with their arms in the air as one cop approaches Wallace’s body while the other is seen speaking into his radio.

‘My god! Oh my god,’ the man recording the footage says.

‘They just killed him in front of me! You really had to give him that many f***ing shots?’

Screaming is heard and Wallace’s devastated mom is seen trying to hit one of the officers.

The footage pans round to down the road where two other cops are seen running toward the scene.

Police spokesperson Tanya Little said Wallace was hit in the shoulder and chest.

Wallace was then rushed to hospital in a police vehicle where he was pronounced dead soon after.

It is not clear how many times he was shot but at least a dozen evidence markers were seen at the scene.

Both officers have been taken off street duty, pending an investigation as Philadelphia officials announced a full probe into the fatal shooting.

Police spokesperson Sgt. Eric Gripp said officers ordered Wallace to drop the weapon, and he ‘advanced towards the officers’.

Gripp said investigators are reviewing footage of what happened.

Both officers were wearing body cameras at the time but the footage has not been released.

Wallace’s devastated father said he believed his son was shot 10 times as questions are mounting over the use of deadly force.

He said the 27-year-old had mental health issues and was on medication at the time.

‘Why didn’t they use a taser?’ he asked outside his family’s residence.

‘His mother was trying to diffuse the situation.’

His family also revealed Wallace was a father who had recently got married.

Maurice Holloway, who witnessed the killing, said several people had tried to calm the situation before the officers opened fire.

‘I’m yelling, ‘Put down the gun, put down the gun,’ and everyone is saying, ‘Don’t shoot him, he’s gonna put it down, we know him,’ ‘ Holloway told the Philadelphia Inquirer.

‘They were too far from him, it was so many shots.’

Several neighbors told NBC 10 Wallace was a ‘wonderful man’ who loved his children and family.

Philadelphia Mayor Jim Kennedy issued a statement Monday night, saying: ‘My prayers are with the family and friends of Walter Wallace. I have watched the video of this tragic incident and it presents difficult questions that must be answered.

‘I spoke tonight with Mr. Wallace’s family, and will continue to reach out to hear their concerns firsthand, and to answer their questions to the extent that I am able,’ he continued, promising a full investigation would be carried out.

Police Commissioner Danielle Outlaw also offered residents her ‘assurance that those questions will be fully addressed by the investigation.’

‘I have directed the Officer Involved Shooting Investigation Unit to begin its investigation,’ Outlaw said.

‘I recognize that the video of the incident raises many questions.