Muslim migrant rapes 12-year-old boy, his lawyer says ‘we must take into account the cultural gradient’ 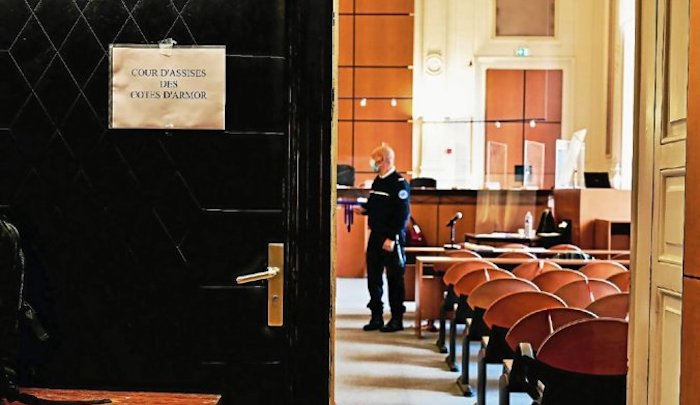 “Those are the ones brought near in the Gardens of Pleasure, a company of the former peoples and a few of the later peoples, on thrones woven, reclining on them, facing each other. There will circulate among them young boys made eternal with vessels, pitchers and a cup from a flowing spring.” — Qur’an 56:11-18

“And they will be given to drink a cup whose mixture is of ginger, a fountain within Paradise named Salsabeel. There will circulate among them young boys made eternal. When you see them, you would think them scattered pearls. And when you look there, you will see pleasure and great dominion.” — Qur’an 76:17-20

“He never went back to play in the park again. Childhood, for him, stopped there,” said Me Le Goardet-Prigent, the lawyer of the civil parties, in front of the Assize Court of Côtes-d’Armor this Monday afternoon. “There” was on August 25, 2018, when a 12-year-old boy was raped in an abandoned house in the city center of Saint-Brieuc, not far from the Promenades playground where he was going.

Three years after the incident, jurors discovered a teenager who is trying to forget. “We have to think about what the journey of a child victim is like,” explains the attorney general, Grégory Martin-Dit-Neuville, this Monday afternoon….”He has to tell the police what he went through, once, twice, three times. Then to the doctor. Take preventive treatments for sexually transmitted diseases. Then there is psychological examination… ”

The child also saw the announcement of the crime to his parents, people whose suffering has surfaced at every stage of the trial since the hearing began on June 25 up to the mother’s discomfort on Friday night after her testimony before the jurors.

And all the suffering of this family directs the attention of the court towards the box. Where Mohammed Rahman Arsala sits. A 30-year-old Afghan. Does he express regret? Yes, as he did Monday morning when questioned by the presiding judge, but only in that he has already served “too much prison,” and that he is the victim of “ill-treatment” in detention, because he is identified as an “informer.” To get out, he is ready to “sign a certificate.” “I promise not to do it again,” he says.

We are all the product of standards, of a story. And he was born a hundred kilometers from Kabul.

“He tells us that if he had been married, it would never have happened, because he would have had a wife to satisfy his needs,” Me Le Goardet-Prigent almost chokes as he says this. “But does he therefore see others only as objects?” The experts questioned his dangerousness. He never seemed to take the measure of what was being blamed on him. Rape? To the police, he replies that a young person following a stranger is necessarily consenting. Before putting forward a cultural factor.

“Bacha Bazi,” explains the attorney general, which involves making young boys sex slaves. “But a custom is not a law.” “And yet we must take into account the cultural gradient,” pleaded Me Manant in defense. “Because we are all the product of standards, of a story. And he was born a hundred kilometers from Kabul. We don’t know what it is like.”

But his career in France has been marked by worrying signals. April 2018: he invited a young girl to his house and pinned her up against the wall. “I just wanted to learn the language,” he explains. “And in May, the photos of the young people that you took in front of the school?,” asks the presiding judge. “Pictures of me for Facebook. “The girls who accuse you of masturbating at the beach in July?” “I just asked them for cigarettes.” He was also transferred from the Saint-Brieuc remand center to that of Brest: “Because the nurse reported inappropriate behavior.” And in Brest, “a fellow detainee filed a complaint for sexual assault,” the presiding judge once again notes. No response from the accused.

He was found guilty of rape of a minor, and sentenced this Monday evening, after two hours of deliberation, to 15 years of criminal imprisonment, without security penalty. A definitive ban on presence on French territory was also pronounced against him.