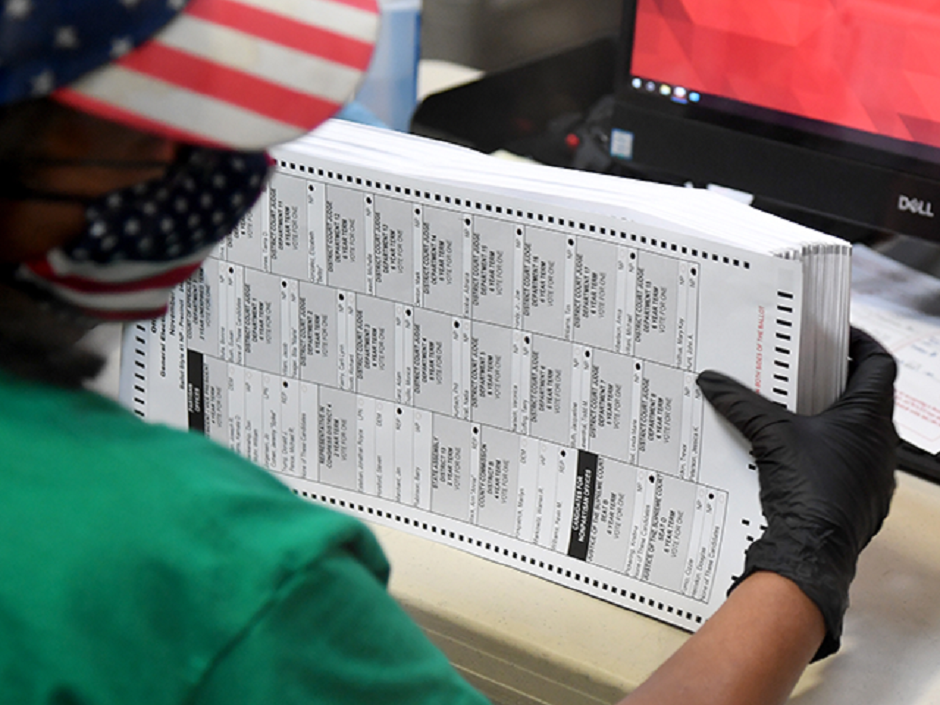 James Madison’s, Alexander Hamilton’s, and certainly Ben Franklin’s ghosts are laughing as their genius in founding the Electoral College is likely to be vindicated.

We have a generation born to an age where civics is no longer taught, millions of Americans do not know the difference between a representative and a senator and too many think the Electoral College is a land grant school west of Omaha.

They are about to get that civics lesson leftists baked out of curricula.

Trump’s legacy is the opening of the political system to millions who never voted before, minorities who for the first time broke Republican, and more women Republican representatives in Congress.

The Deplorables may not have understood raw political power, Leftist manipulation via vote fraud conveniently covered by the media and Big Tech.  But they appear to get it now.

It is only going to get uglier every day as more people come forward with fraud testimony, photos of trucks delivering ballots, and records of software that stops in the middle of the night.

The mainstream media and Big Tech almost unanimously deliver the message that “Biden won, it is time to come together, let’s move on.”  That would have worked before, but it is not going to work now.

It is not going to work because Donald Trump is not just a President.  As others have said, he is “our champion.”

That changes the equation to one of a “cause” rather than an election.

There is no “coming together” when it’s a cause.  Not after this kind of raw, bare fraud.  No compromise here.

That dynamic, plus Trump’s fight-it-out-every-day mentality, is pretty hard to beat.

Vote fraud on the scale seen this week can hardly be quantified between today and when the Electoral College casts its vote.  Lawsuits take time, discovery is a slow.  We cannot trust our own Justice Department, the FBI,  and intelligence community who have been implicated trying to destroy the current President.

There is legal proof and common-sense proof.

Legal proof may take a bit but the common-sense measurement showing massive fraud is off the charts, and it is only five days after the election. There’s plenty more to come.

Biden is at 290 Electoral College votes, with the 20 from Pennsylvania looking more wobbly daily as even the Pennsylvania legislature has begun hearings.  The Supreme Court is pretty much on record that those 20 are far from in the bag.

The fights in Wisconsin, Michigan, Georgia, Arizona, Minnesota and other states go on.

Most, perhaps all, of the states in question have Republican legislatures – both houses.

Many state legislators are the farm team waiting for that shot at Congress or becoming a governor or attorney general.  They are politicians, and politicians, of any party, always have an eye on the next prize.

Then there is MAGA-nation.  71 million voters who are about to get a civics lesson that their state legislators can certify this obvious electoral fraud by certifying the current fraudulent vote or they can put in their own electors, or they can just choose to sit it out.

But there is another the next step.

Let’s go there.  America was here before.  It was Rutherford B. Hayes against Samuel Tilden.  Nobody had enough Electoral College votes, so it went to Congress to decide.  The history of what happened is interesting.

State legislators in seven or eight key states, not the court, not the governor, choose the electors.

When the Deplorables learn that the guy next door who is a state rep, or their insurance agent who is a state senator, certifies this election fraud, do you think they might just make a call?

Republican legislatures are inhabited by many of the same craven political hacks who then move on to Congress.  They care about only one thing: getting elected.

It is rumored that archeologists tested bones of 18th-century politicians to see exactly when and where the “courage gene” was eliminated from their genome sequence.  They believe it may not have ever existed.

State legislatures in six or seven or more states, run by Republicans, have a choice:  certify an election that was clearly fraudulent, certify a different slate of electors who will vote against the popular, but fraudulent vote, or just fail to certify.

My bet is several may choose option 3.  If even one state or two fail to certify, the election goes to Congress.

What Republican state legislator wants to see MAGA-nation pillory them with “…Jack’s vote put Joe Biden in office!”  The thousands of Trump rally attendees in Butler, Pennsylvania, acting in one voice, calling state reps and senators.  Just think of what fun it would be!

Big Media, Big Tech, Facebook, none of it matters to that anonymous state rep or state senator.  They are painfully visible to their constituents.  They see their voters daily at the grocery store, in church, at the Kiwanis Club.

It is said that all politics is local.  It just got very local for this presidential election and there are unlikely to be many state reps or state senators who want to have 71 million MAGA-nation Deplorables targeting them.

Why not let Congress decide?  The legislator can be a hero to his or her constituents while they dodge a certain electoral bullet in the next election.

Congress gets to vote — each state, one vote.  Wyoming and California, each one vote.

Here’s how that works: under the Twentieth Amendment, congressional terms end and begin on January 3, over two weeks before the newly elected president assumes office on January 20:

G.A.H. caught that Mr. Valentine was less optimistic than he should be and explains why looking forward to the new House is so important:

I think this is very important, because when people see a headline like “26-24”, some may think there go the Republicans, trying to sneak in their ticket when the delegation split is only 26-24, just 1 state vote. . . . .  but, given that the real split is 26-20 (or even 27-20, AND given that the Democrats just lost control of  3 (or 4 state if IA CD2 goes R) delegations on Nov 3, it is even more justified if the outcome of the Presidential election eventually goes to a House vote under the 12th Amendment, particularly since the American people just voted to take away 3 to 4 delegations from Democrat control.

P.S.  This is also important, because in some universe it is conceivable that a 26-24 delegation with a couple of liberal RINO R delegation flips could possibly go Biden.  Since it will actually be either 26-20 or 27-20, there is no way Biden could ever win the House voting by delegations under the 12th Amendment, because he actually has a 6 or 7 delegation deficit, NOT merely a 2 delegation deficit…