New: Intel Officials Leak About What FBI Was Looking For In Trump Raid And It’s Not Looking Good 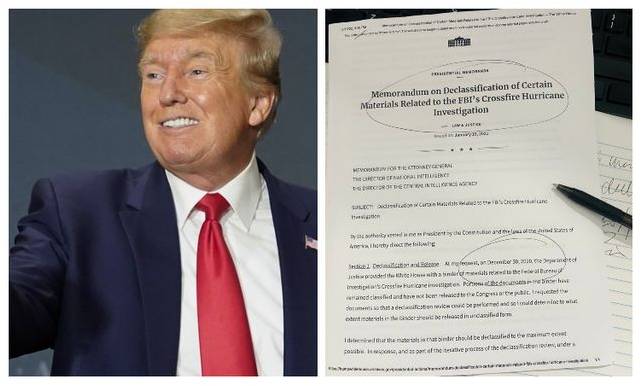 President Trump on Friday said he will be filing a “major motion” soon in response to the “illegal” FBI raid of his Florida residence.

“A major motion pertaining to the Fourth Amendment will soon be filed concerning the illegal Break-In of my home, Mar-a-Lago, right before the ever important Mid-Term Elections. “My rights, together with the rights of all Americans, have been violated at a level rarely seen before in our Country. Remember, they even spied on my campaign. The greatest Witch Hunt in USA history has been going on for six years, with no consequences to the scammers. It should not be allowed to continue!” – Trump posted to his Truth Social page.

The Fourth Amendment protects Americans against unreasonable searches and seizures by the government:

“The right of the people to be secure in their persons, houses, papers, and effects, against unreasonable searches and seizures, shall not be violated, and no Warrants shall issue, but upon probable cause, supported by Oath or affirmation, and particularly describing the place to be searched, and the persons or things to be seized.”

The judge who allowed the FBI to raid President Trump’s home donated thousands of dollars to Obama and Democrats.

Magistrate Judge Bruce Reinhart also recused himself from Trump’s RICO case against Hillary Clinton and the DNC so there is clearly a conflict of interest in this case as well.

But wait there is more!

The FBI collected all of the documents that were government property and used concerns about classified documents to justify the raid, but agents were looking for Trump’s personal stash containing documents related to Russian collusion accusations against him, fearing that he would “weaponize” them, Newsweek reported. One former Trump official said he may have planned to use the documents to help in a presidential run in the coming term.

“Trump was particularly interested in matters related to the Russia hoax and the wrong-doings of the deep state,” the official told the outlet, adding that he may have intended to use the documents in a 2024 presidential campaign. “I think he felt, and I agree, that these are facts that the American people need to know.”

“The sought-after documents deal with a variety of intelligence matters of interest to the former president, the officials suggest—including material that Trump apparently thought would exonerate him of any claims of Russian collusion in 2016 or any other election-related charges.”

“The true target was these documents that Trump had been collecting since early in his administration,” the source said.

This means that their initial reports are fake!

As we previously reported about this investigative reporter Paul Sperry was right yet again:

In other words, it sounds like documents that would have shown the case was trumped up against him.

2 thoughts on “New: Intel Officials Leak About What FBI Was Looking For In Trump Raid And It’s Not Looking Good”