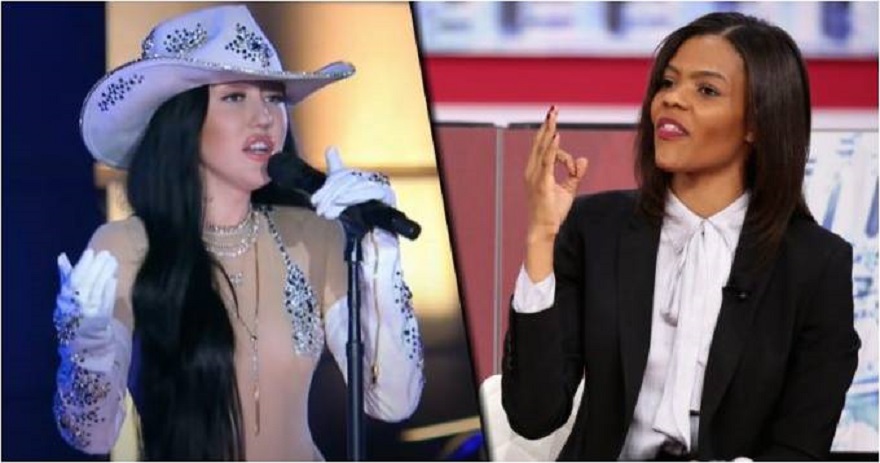 Noah Cyrus, the little sister of pop star Miley Cyrus, found herself in some hot water after lashing out at well-known political commentator Candace Owens. After appearing to call Owens a racist slur, Cyrus was made to instantly regret it.

Noah Cyrus decided to get in on the fray between political activist Candace Owens and pop star Harry Styles after Owens critiqued a Vogue photoshoot featuring Styles wearing a dress. Not impressed with the imagery, Owens shared photos from the shoot to Twitter, where she blasted Styles for wearing a ball gown, The Blaze reported.

“There is no society that can survive without strong men. The East knows this. In the west, the steady feminization of our men at the same time that Marxism is being taught to our children is not a coincidence. It is an outright attack,” Owens captioned the images of Styles as she posted them to Twitter. “Bring back manly men.”

There is no society that can survive without strong men. The East knows this. In the west, the steady feminization of our men at the same time that Marxism is being taught to our children is not a coincidence.
It is an outright attack.

Owen’s tweet prompted a response from Styles, who is the first man to appear solo on the cover of Vogue. Styles shared a photo of himself wearing effeminate clothing and eating a banana, captioning the image, “Bring back manly men,” as he posted it to Twitter.

Not wanting to be left out of the limelight, Noah Cyrus decided to chime in — a move that she’d quickly regret after she figuratively opened her mouth and inserted her foot firmly in it. Indeed, it wasn’t long before Cyrus was in hot water, and she knew it.

Lashing out at Owens in defense of Styles, Cyrus “mistakenly” called the black conservative commentator a racist slur when she posted an image featuring Styles wearing a dress to her Instagram story. It’s what she wrote along with the image that was the issue. “He wears this dress better than any of u nappy a** heauxz,” Cyrus boldly declared.

For anyone who might not know, the word “nappy” has historically been used as a derogatory term to describe the hair of black people. This isn’t a big secret or little known fact, either. It became big news in 2007 when radio host Don Imus of “Imus in the Morning” was fired by CBS Radio and his show was pulled by MSNBC for comments similar to those made by Noah Cyrus, according to Daily Mail.

While talking about the NCAA Women’s Basketball Championship, the shock jock described the Rutgers University women’s basketball team, which had nine black players, as “nappy-headed hoes.” He regretted his remarks, which he admitted before he died on December 27, 2019. Saying he had few regrets in his iconic, yet controversy-laden radio career, the “Imus in the Morning” host admitted that calling the Rutgers incident was one of his biggest regrets because he “knew better.”

Cyrus soon found herself feeling similar regret for the very similar remark. Although she quickly deleted the post and issued an apology, the damage was already done. Thanks to fellow conservative commentator Rob Smith, who grabbed a screenshot, Owens got to see Cyrus’s bigoted remark, and she wasn’t about to let her get away with it.

“Any one of [the] woke liberals care to explain to me how @noahcyrus calling me a ‘nappy a** hoe’ is not racist?” Owens asked in a tweet. “I’m all ears,” she continued. “You guys love cancel culture. @MileyCyrus come get your sister!”

Any one of woke liberals care to explain to me how @noahcyrus calling me a “nappy ass hoe” is not racist?
I’m all ears.
You guys love cancel culture. @MileyCyrus come get your sister! https://t.co/N6Ej7UICPW

Candace Owens didn’t stop there. Taking to Instagram, she posted a lengthy video, lambasting Noah Cyrus over her privilege and apparent ignorance. “Please do not ever in your over-privileged life think that I will allow that statement to go by, unchecked. Also, who knew Hannah Montana had a sister?” the conservative firebrand said, taking aim at Noah Cyrus.

Hundreds of others followed suit on Twitter, berating Cyrus for using the racially offensive slur, even though many of them said they were not huge fans of Candace Owens. With her racial insensitivity pointed out, Cyrus immediately jumped into damage control mode, issuing an apology, but she failed to mention Candace Owens by name in it.

Instead, Cyrus claimed that she didn’t know that the word “nappy” was racially offensive, adding that she was “mortified” by the words she wrote only hours earlier, The Blaze reported. “I am mortified that I used a term without knowing the context and history, but I know now and I am horrified and truly sorry,” Cyrus wrote in a post on her Instagram story on Thursday, according to People Magazine. “I will never use it again. Thank you for educating me. I in no way meant to offend anyone. I am so so sorry.”

Noah Cyrus — who previously posted an edited image of herself flipping President Donald Trump the bird with “F*CK TRUMP” at the top — deserves credit for admitting her “mistake” and apologizing. However, we can only wonder if such a remark would be easily forgiven if a person with right-leaning political views had made the same “error.”

Oh, that’s right. We already know. Don Imus — who called Dick Cheney “a war criminal,” Hillary Clinton “Satan,” Oprah Winfrey “a fat phony,” and Ted Kennedy “a fat slob” — was fired for the saying the same. I guess we will have to sit back and wait to see if Noah Cyrus still has an acting and singing career after this. Although to be fair, she really isn’t that popular, to begin with.