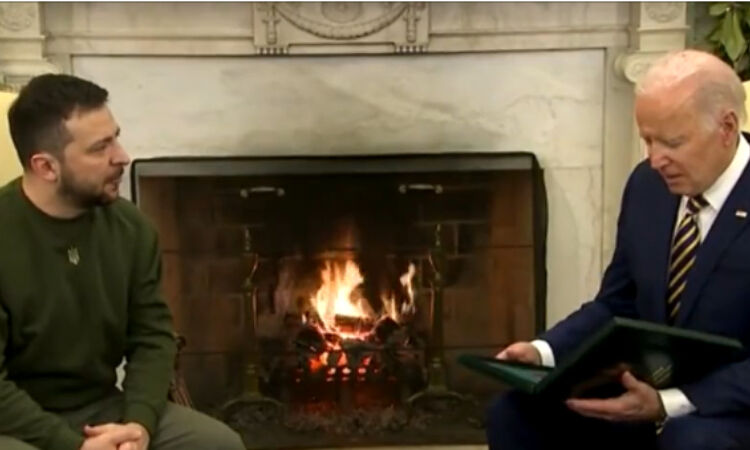 Ukraine President Volodymyr Zelensky kicked off his whirlwind visit to Washington Wednesday — his first trip outside his country since Russia invaded 300 days ago — by presenting President Biden with a medal previously given to a Ukrainian military officer.

“I’m delighted you could make the trip,” Biden, 80, told the 44-year-old Zelensky as the leaders began their bilateral meeting in the Oval Office — referring to his Ukrainian counterpart as “the man of the year” in reference to Time magazine awarding Zelensky that honor earlier this month.

Zelensky, for his part, passed along “all my appreciations from my heart and from the heart of all Ukrainians” to Biden, Congress and “ordinary people” in the US for their support of his country.

The Ukrainian president then took out the country’s Cross of Military Merit award and explained that it had been originally given to the captain of a HIMARS rocket launcher battery fighting in the eastern city of Bakhmut.

“He’s very brave and he said ‘Give it to a very brave president.’ And I want to give that, the cross for military merit that [he] won,” Zelensky went on.

Biden accepted the honor, saying it was “undeserved, but much appreciated.”

Zelensky added that the captain had told him “many of his brothers this [HIMARS] system saved. So thank you very much.”

But nothing worse than presenting the President of the United States with an award from “Butthole”.

I actually had to source this from multiple places to make sure this wasn’t edited or fake.

They are literally laughing at us to our faces…
I even watched this on Fox News to see if there was any reaction from Biden but nothing happened!

Biden said he would return the favor by sending the captain “a command coin,” an apparent reference to the US military’s “challenge” coins.

They are literally laughing at us to our faces…

Imagine giving someone $80 billion dollars “for defensive purposes” and in return getting an award from a guy named “Butthole”….

One thought on “NOT SATIRE: Zelensky Gives Joe Biden An Award From “But**ole” (Video)”