‘One monolith to rule them all’: Golden tower appears in Colombia 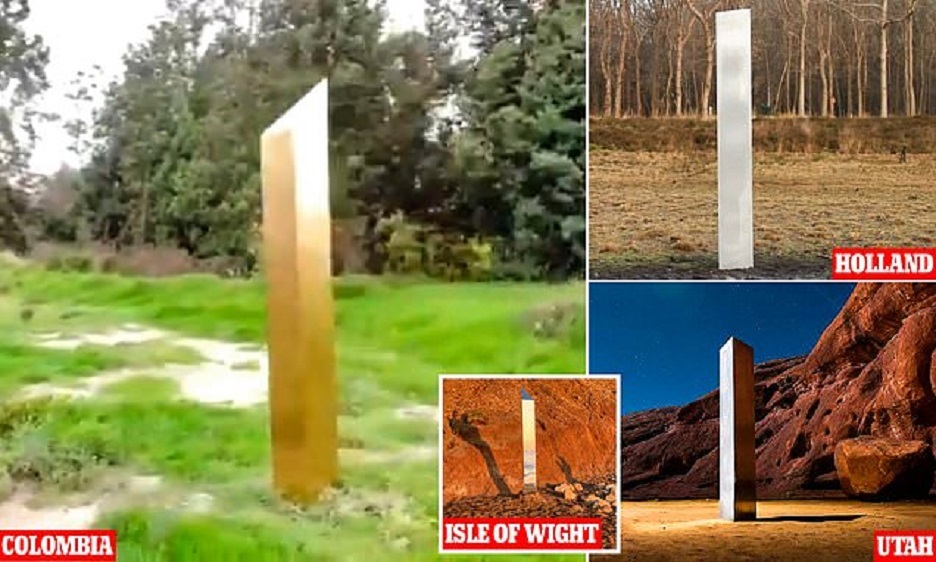 A gold monolith has appeared in rural Colombia prompting locals to ask if it is the ‘monolith that controls them all’ after similar silver structures have popped up around the world.

After the first mysterious monolith appeared in the desert in the US state of Utah at the end of November, others soon popped up in California, Romania, and the Isle of Wight.

The four monoliths were all metal and silver in colour, however the fifth structure that has appeared in Colombia is golden – leaving locals wondering if it could be the ‘master monolith’.

The monolith was found in the municipality of Chia in the Colombian department of Cundinamarca over the weekend while another monolith was discovered at Compton Beach in the Isle of Wight.

Meanwhile in the Netherlands – a silver monolith has appeared in the Kiekenberg nature reserve near Oudehorne. It was first spotted by walkers on Sunday morning.

Local media reported that there was no trace of any footprints round the base of the structure or any other clues as to how it got there.

The origin of the gold monolith in Colombia has baffled local with many speculating that it was placed there by extraterrestrials.

However, a community called ‘The Most Famous Artist’ founded by American artist Matty Mo has since claimed credit.

The group is reportedly selling three full-sized monoliths similar to the ones found in different parts of the world for a price tag of USD 45,000 (GBP 33,413) each.

When Mo was asked if the group was claiming responsibility for the monolith discovered in the Isle of Wight over the weekend, he responded: ‘The monolith is out of my control at this point.

‘Godspeed to all the aliens working hard around the globe to propagate the myth.’

The monolith was found by beachgoers at Compton Bay on the Isle of Wight yesterday.

Several photos taken from different angles suggest the monolith is buried in the sand and gives and perfect reflection.

It is unclear how the heavy object was moved to the beach, which is only accessible by footpath.

Elsewhere, tourists were flocking to the new metal monolith in California, after it showed up within days of others in Romania and Utah being removed.

On Tuesday, images emerged of four men working in the dead of night to remove the strange, triangular pillar from the desert in Utah.

The shiny pillar, which protruded some 12 feet from the red rocks of southern Utah, was first spotted on November 18 by baffled local officials counting bighorn sheep from the air.

Photographer Ross Bernards, who visited the monolith Friday, described in an Instagram post accompanying the photos how four men suddenly appeared that night, pushed the object over and dismantled it before carrying it off in a wheelbarrow.