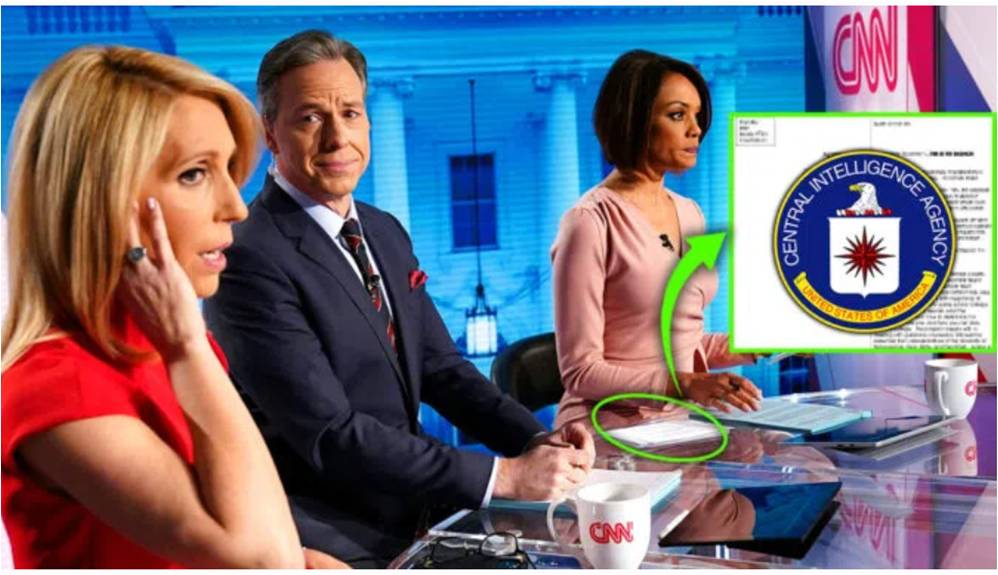 Multiple mainstream media outlets have been caught reading from the same script and advancing an identical propaganda narrative following the FBI raid on former President Donald Trump’s home at Mar-a-Lago.

Numerous media outlets read from the exact same script, repeating a similar talking point following the raid, saying “sources say there’s been a strong reaction to the raid on extremist and Q-Anon-related forums.”

The official narrative pushed by these mainstream outlets attempts to use guilt by association to tarnish criticism of the raid. According to the mainstream media, anyone criticizing the unprecedented raid on the home of a US president is a conspiracy theorist calling for violence.

The disturbing footage of mainstream media talking heads repeating the exact same scripted lines suggests the public are being force-fed government propaganda about the FBI raid.

Which raises the question, what do they have to hide and why are they so determined to make everybody see the event in the same way?

This is mind-control in action. There is a reason they are called programs and programming.

And it’s not the first time the media has been caught parroting from the same propaganda script.

In 1949 a CIA director called Frank Wisner was given a task to create an organization responsible for the manipulation of media and direct action in the United States and other countries around the world. This operation would be known as Mockingbird.

The justification for Operation Mockingbird was to fight against Communism. But as often happens with government programs, the stated objective and the reality of what the program is used for do not always align.

The CIA would go on to hire many top journalists working for big mainstream media outlets to further their cause. But they did not stop there. They also hired many students and foreign journalists as well. Anything to stop the threat of Communism. And, increasingly, influence public opinion in other ways too.

The CIA even funded Hollywood films.

While we can sit here and argue about the ethics of an operation like Mockingbird, there is no argument about its effectiveness. Mockingbird was incredibly effective.

Operation Mockingbird was a large-scale program of the CIA that began in the early years of the Cold War and attempted to manipulate domestic American news media organizations for propaganda purposes.

The CIA was able to implement a mass media manipulation system, allowing them to control their narrative, while censoring those they did not like, as long as it was in a company in their control.

Huge media companies that controlled vast swathes of the American media landscape including CBS, Time Magazine, The New York Times, and the Washington Post, were all on the bankroll of the CIA – and directly under their control.

While Operation Mockingbird was able to operate secretly for many years, they could not stay in the shadows forever. In 1964, David Wise and Thomas B. Ross published a book called “The Invisible Government.”

The book blew the lid on CIA covert activities and how the agency operated. Then just two years later, Ramparts published the first expose of Mockingbird.

Sol Stern, the writer of the expose, describes the experience: “Until the Ramparts story broke, the government could count on the Mandarins of Washington journalism to protect national-security secrets. But as details of the front groups spilled out, editorials in the Times and the Post skewed the secret funding arrangement and compared it with methods used by America’s Cold War enemies.”

The CIA was beginning to feel the heat.

The Watergate scandal drew the attention of the public onto America’s many agencies. This led to many investigations, most notably the Church Hearing.

In 1975, a US Senator by the name of Frank Church set up a committee forever known as the Church committee. CIA Director William Colby was called in for a hearing.

The Church committee would go on to release various reports exposing the CIA, leading to public outrage about their actions.

The next year George H.W. Bush, who was the new CIA Director, publicly ended the CIA’s relationship with the media, stating “The CIA will not enter into any paid or contractual relationship with any full or part-time news correspondent accredited by any United States news service, newspaper, periodical, radio or television network of station.”

Perhaps that is why CNN are listed as “Entertainment” and not “News”? Just a thought.

Regardless, the scary fact is that mainstream media is a cesspool of manipulation and thought control and 99% of people have no clue about what is going on.

And if you think it was bad in the 1960s and 70s, you need to get yourself up to speed because in 2012 Obama reversed the Smith-Mundt Act, meaning domestic audiences can again be targeted by government propaganda.

Propaganda and fake news have been a hot topic since then, especially since media favorite Hillary Clinton lost the 2016 election.

If you are wondering what Obama’s handiwork looks like in practice, consider this Exhibit A for the prosecution:

The poet W.H. Auden summed it up best. He said, “Propaganda is a monologue that is not looking for an answer, but an echo”