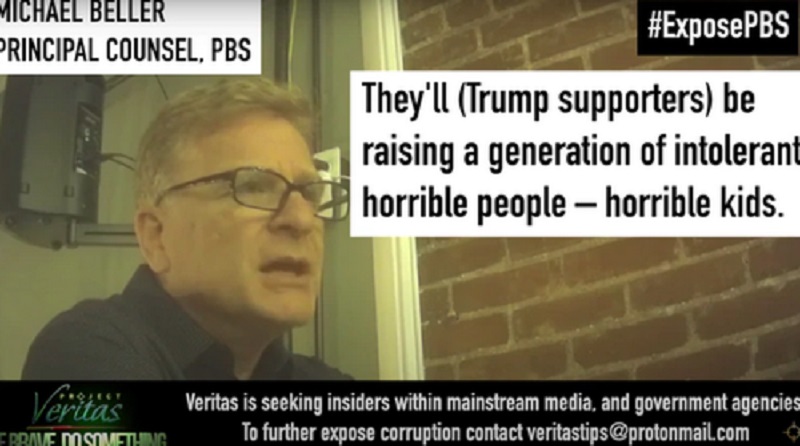 This is what the leftists, along with those that support their agenda, think about Americans. It’s in their own words. Believe them when they say it.

“Americans are so fucking dumb,” said PBS Principal Counsel Michael Beller, who was chatting with one of Project Veritas‘ undercover self-described guerilla journalists. “You know most people are dumb.”

Beller is just saying what I would hear over and over again in Washington D.C. parties and pubs. He’s not the exception and his disdain for our nation makes my stomach turn because he, and others like him, are seizing power from the people every day. They hold positions of power that actually can affect our daily lives and that of our children.

And to think PBS if funded with our taxpayer dollars.

“Kids who are growing up, know nothing but Trump, for four years, you’ve got to wonder what they’re (Trump supporting children) going to be like, ” Beller told the undercover journalist. “They’ll (Trump supporters) be raising a generation of intolerant, horrible people – horrible kids.”

Beller suggests removing the children from parents who supported Trump and then sending them to enlightenment camps.

IS BELLER FOR REAL!

This idea is similar to what is actually happening in China, as the Chinese Communist Party has been terrorizing and removing the Uighur Muslim population to supposed “re-education” camps.

Beller needs to be fired by PBS. My daughter watches PBS and she won’t be anymore. This is absolutely intolerable.

Oh, Beller also said that if “even if Biden wins, we go for all the Republican voters, Homeland Security will take their children away…”

“Even if Biden wins, we go for all the Republican voters, Homeland Security will take their children away…”#ExposePBS pic.twitter.com/OzBLeCP8YH