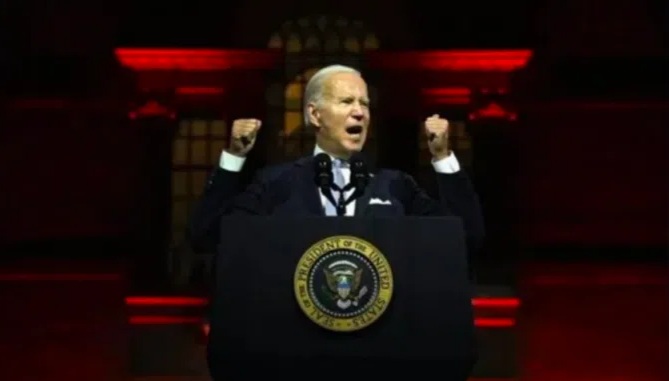 Calls to impeach President Joe Biden trended on Twitter last night following a disturbing primetime address in which Biden accused tens of millions of conservative Americans of being violent “extremists.”

Biden, who ran on the promise to become the “president of unity” if elected, took to the blood-red themed stage and began verbally attacking Former President Donald Trump and the 74 million Americans who supported him in the 2020 election.

“Too much of what’s happening in our country today is not normal. Donald Trump and the MAGA Republicans represent an extremism that threatens the very foundations of our republic.”

“There’s no question that the Republican Party today is dominated, driven, intimidated by Donald Trump and the MAGA Republicans. And that is a threat to this country. MAGA Republicans have made their choice. They embrace anger. They thrive on chaos. They live not in the light of truth, but in the shadow of lies. Together, we can choose a different path.”

Biden’s speech had an ominous and threatening tone from the start, as dark red lighting shone on the president with Marines stationed behind him. Biden had to clear his throat repeatedly during the speech, possibly due to his two recent positive COVID-19 cases.

Aside from the divisive tone, Biden’s speech was also full of misinformation and lies. For example, at one point during Biden’s address, the president claimed, “America’s economy is faster, stronger than any other advanced nation in the world.” Economists quickly took to social media to point out the falsehoods in such a statement.