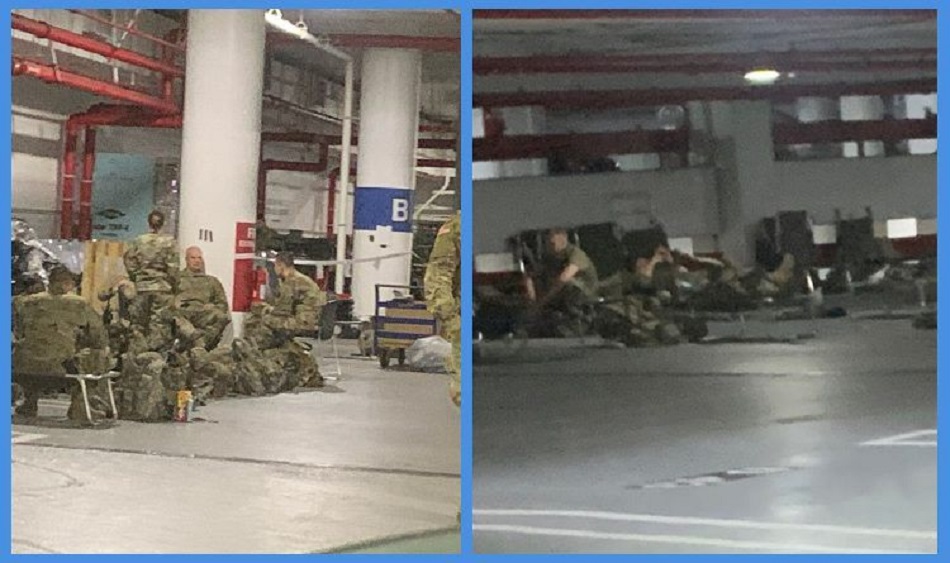 Weeks after the Capitol riot, the National Guard still hasn’t left their post in Washington DC.

Nearly 25 000 National Guard members were called upon following the unrest on January 6th.

Around the Capitol, you can see officers and guardsmen standing outside of a fence with shields and tactical gear. There are military vehicles blocking entrances to certain streets on Capitol Hill.

Let’s not forget that members of the National Guard were made to vacate the U.S. Capitol and sent to rest in a nearby parking garage, while providing security around U.S. President Joe Biden’s inauguration.

Thousands of soldiers from the National Guard poured into Washington, D.C., in January 2021 to provide security around the inauguration of U.S. President Joe Biden and in the wake of a Jan. 6 mob attack on the U.S. Capitol. But on Jan. 21, pictures and videos emerged on social media showing hundreds of these soldiers crammed into a parking garage for their rest.

“Yesterday dozens of senators and congressmen walked down our lines taking photos, shaking our hands and thanking us for our service. Within 24 hours, they had no further use for us and banished us to the corner of a parking garage. We feel incredibly betrayed,” the Guardsman said.

Guardsmen were later allegedly let back into facilities after an outcry from lawmakers.

Joe Biden has called the chief of the National Guard Bureau to apologize after images circulated online of troops sleeping in a parking garage.

Biden also asked what could be done to help these National Guard members, the BBC reported.

Three weeks later it seems they are in the same situation.

Congresswoman Lauren Beobert today shared photographs she claimed are of National Guard troops Monday night sleeping outside in the sub-freezing weather in a parking garage in Washington, D.C.

“Why is it that nearly 3 weeks after the initial outrage, Nancy Pelosi is still having our National Guard troops take their breaks & sleeping in freezing cold garages? These photos were taken last night! This needs to stop NOW,” Boebert tweeted.

Pelosi is obviously preoccupied with impeaching a private citizen to worry about anything important like COVID relief (opening the economy safely) or treating our troops with the respect they deserve.

Why is it that nearly 3 weeks after the initial outrage, Nancy Pelosi is still having our National Guard troops take their breaks & sleeping in freezing cold garages?

These photos were taken last night!

This needs to stop NOW! pic.twitter.com/twaFG7vQuR