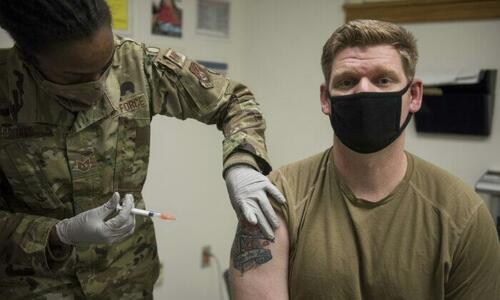 Three United States military doctors have blown the whistle on documents allegedly from The United States Department of Defense (DoD) that they had access to, which show “skyrocketing rates of disease” since the introduction and mandating of the CCP virus vaccines in armed forces, human rights attorney Leigh Dundas told The Epoch Times.

Renz shared some of the numbers related to medical disorders in the U.S. military data with The Epoch Times.

The whistleblowers, who are represented by Renz, gave him the data “under penalty of perjury,” he said during the hearing.

Renz intends to submit the information to the courts, he told Johnson.

The DoD responded that the DMED (Defense Medical Epidemiology Database) data from 2016 to 2020 that the whistleblowers brought up was erroneous and incomplete, and is currently under review.

“DHA’s Armed Forces Surveillance Division (AFSD) conducted a complete review of the data contained in the Defense Medical Epidemiology Database (DMED) and found that the data was incorrect for the years 2016-2020,” Maj. Charlie Dietz, a spokesperson for the DoD, told The Epoch Times.

“The DoD has claimed that the DMED data from the years 2016-2020 was incorrect. This is absurd. We spend millions of dollars per year on DMED and people monitoring DMED which is one of the premier epidemiological databases in the world. Accuracy in this database is critical as it is used to monitor for health issues in our troops.

“The DoD would have us believe that the DMED database was wrong from 2016-2020 but then magically was corrected in 2021 despite the fact that they had not noticed it was wrong until we pointed it out in our testimony before Senator Johnson. Further, we are asked to believe that in 2020, the year of what they claim to be the greatest pandemic since 1918, and despite the fact that it is documented that the CDC was also watching this database, no one noticed an error of 20 million-plus injury/disease codes per year,” Renz told The Epoch Times.

“The Department of Defense, the Biden administration is on notice they must preserve these records and this must be investigated,” Johnson said in the five-hour hearing in Washington.

“Renz also informed me that some DMED data showing registered diagnoses of myocarditis had been removed from the database. Following the allegation that DMED data had been doctored, I immediately wrote to you on January 24 requesting that you preserve all records referring, relating, or reported to DMED. I have yet to hear whether you have complied with this request.” Johnson wrote in a letter (pdf) to Lloyd Austin, the U.S. defense secretary.

Dundas told The Epoch Times that “in January of 2021. They introduced the vaccine, they mandated the vaccine for the U.S. military members. And in just the first 10 months of that vaccination year, anxiety jumped from 37,000 typically prior to that to 931,791 cases. It was a 2,400 plus percent increase.”

She went on to say that breast cancer was “pretty formulaic,” ranging from 500 to 900 cases for the five years prior to the introduction of the mandatory vaccination.

Even diseases that have not been connected so far with the vaccines saw a dramatic spike.

“January acute myocarditis was in 176 cases, but now it’s practically down to 70 … bad that stuff going on,” she continued.

The Epoch Times reached out to Dr. Christiane Northrup, a board-certified obstetrician-gynecologist with more than 30 years of experience and the former president of the American Holistic Medical Association.

Particularly alarming is the increase in miscarriages, she said.

“Here’s what we were finding—starting in April of 2021. All of us in the five Doc’s group, Dr. Lee Merritt, Dr. Carrie Madej, Dr. Sherri Tenpenny, and Dr. Larry Palevsky, and me. We were hearing stories from all over the country about women who were having abnormal bleeding, miscarriages, and stillbirths, just from being around the people who had recently had the shot,” Northrup told The Epoch Times.

“We all got together and we said, Wait a minute. We’ve got to study this,” Northrup went on.

“People that I knew in the fertility business, we’re finding that all these women were having problems. I was getting a lot of personal calls. ‘What do I do?’ … we were very concerned.”

Michael Yeadon, the former Pfizer vice president and chief scientist for allergy and respiratory research, and Dr. Wolfgang Wodarg issued a petition (pdf) for administrative action regarding confirmation of efficacy on several of their findings regarding the CCP (Chinese Communist Party) virus vaccines.

“We detailed a series of mechanistic toxicology concerns which we believed were reasonable to hold, unless & until proven not to occur,” Yeadon told The Epoch Times.

“Among those was that adverse impacts on conception & ability to sustain a pregnancy were foreseeable,” he added.

“It’s important to note that none of these gene-based agents had completed what’s called ‘reproductive toxicology.’ Over a year later, this battery of tests in animals still has not been done. So there was & still is no data package supporting safety in pregnancy or prior to conception.”

One of the whistleblowers, Dr. Pete Constantine Chambers, has been practicing medicine for 25 years, 16 of which he served as a flight surgeon attached to Special Operations.

“Here is a question that troubles me,” Chambers told The Epoch Times via email.

“After having my orders cut short leaving me no medical insurance coverage, losing my pay and leave that I had accumulated without any forewarning for exhibiting the Army Value of Personal Courage, and practicing the safe standard of care medicine by an entity I have served for so long; 1) What will happen to my enlisted troops? 2) How many? How many soldiers and airmen will experience adverse reactions, some of which result in disabilities or God forbid, death.

“One might call a provider such as myself an ‘anti-vaxxer.’ Nothing is further from the truth,” he further noted.

“I took the full course starting in January. I trusted my government and medical leaders. I have taken every vaccine the Army has given me since my first day as a private, in 1983. However, I too have experienced adverse reactions and am currently in the care of medical specialists exploring the signs and symptoms post second vaccine as well as the ominous finding on my brain MRI.

“I love my country, my state, and the heroes I work with and for. I believe all Americans are worth the sacrifices we make to keep us safe. I also believe as a provider in the first stanza of the Hippocratic Oath; ‘First of all, do no harm.’”