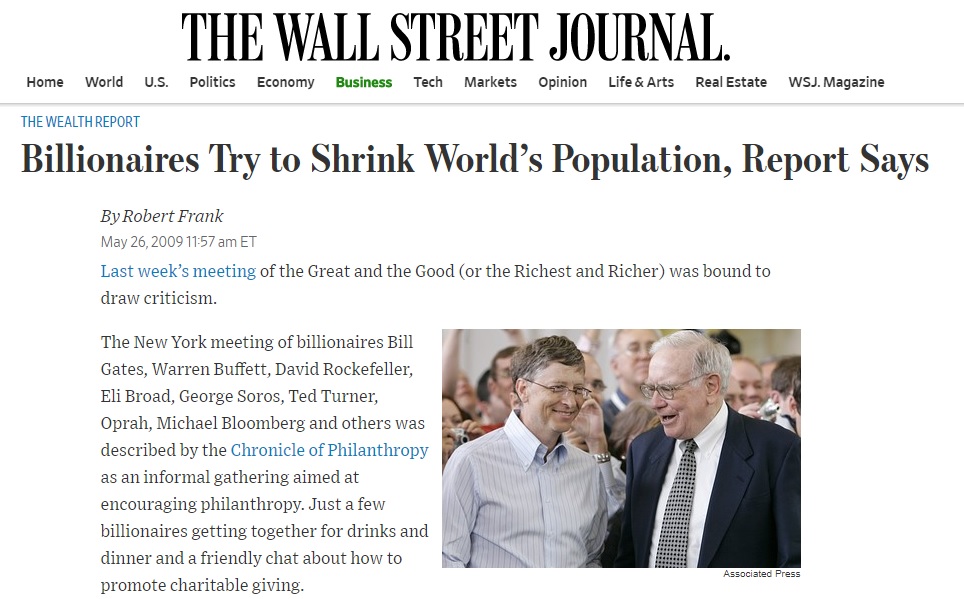 On May 5, 2009, Bill Gates gathered together a handful of the West’s richest men who met in Manhattan to discuss what they considered the most dangerous, most critical threat to the planet.

Those attending included Warren Buffett, Ted Turner, George Soros, and David Rockefeller, Jr. What did they deem the world’s biggest threat? They each gave a 15-minute presentation on their primary concern for the planet. “Taking their cue from Gates, they agreed overpopulation was a priority,” according to the report from London’s Sunday Times.

Meanwhile, the staffers of the oligarchs were told that “security briefings” were the reason for their meeting. “We only learned about it afterward,” said Stacy Palmer, editor of the Chronicle of Philanthropy. “Normally these people are happy to talk about good causes, but this is different—maybe because they don’t want to be seen as a global cabal.” [1]

Gates meeting was a great success, as his billionaire friends and all the major foundations decided to contribute to the Gates Foundation’s population control efforts. Warren Buffett, the second richest at the time behind Gates, shifted $31 billion of his assets to his friend Bill. In 2011, Gates told CNN: “The benefits [of vaccines] are there in terms of reducing sickness, reducing population growth.” In a 2010 Ted Talk he said, “If we do a really great job on new vaccines, health care, reproductive health services, we could lower [population] by perhaps ten or fifteen percent.”

Such quotes alarmed many that Gates’ obsession with vaccines might be accompanied by a sinister agenda for population reduction. This concern materialized in Kenya in 2014 when of 3 million women there unknowingly received vaccinations from the Gates-funded World Health Organization that were secretly laced with a sterilant and contraceptive. The WHO denied it, but in 2017, the former prime minister of Kenya, Raila Odinga backed the doctors: “Today, we can confirm to the country that the Catholic Church was right.” [2]

My article last week highlighted Gates’s association with eugenicist, Nazi sympathizer, and white supremacist Margaret Sanger, founder of Planned Parenthood, through Bill Gates, Sr. being “head of Planned Parenthood,” according a 2003 Bill Gates interview with Bill Moyers. My second article this week documents that Gates, along with George Soros, is a key donor for the Lucis Trust, originally named after Lucifer.

What about the others attending that 2009 meeting, such as David Rockefeller? The Rockefeller Foundation funded Margaret Sanger in her early years. A little research on the Kenya HCG vaccine that sterilizes women also brings to the fore the Rockefeller family. I tracked down the Rockefeller Foundation’s 1968 Annual Report. On page 52, it calls for “progress on immunological methods, such as vaccines, to reduce fertility.” Their 1988 Annual Report cites a large grant given to India for “a large anti-fertility vaccine for women.” Another generous grant is listed on page 56 “for research on a potential contraceptive vaccine based on beta-hCG synthesized bacteria”—just a few years before the 1993 experiments in Mexico, Nicaragua, and the Philippines. [3]

Let’s look at one more member of the famous 2009 meeting of oligarchs in Manhattan—Ted Turner. The founder of CNN has been concerned about overpopulation for decades. In 1996, he told Audubon magazine, “We’re all 5 billion of us on this little earth swimming around in space, and there’s too many of us,” he said. “If we had a much smaller population . . . we could cut back to 250 million—350 million people.”

Turner’s longings are memorialized by a monument of huge, druid-like stone tablets that sit atop a rural hill in Elbert County, Georgia, 30 minutes from CNN headquarters. Yoko Ono wrote a musical score with John Cage in three movements to honor these “Georgia Stones,” which proclaim in eight languages the “Ten Guides” for the billions of people now on earth.

The First Guide says in engraved script: “Maintain humanity under 500 million in perpetual balance with nature.” [4]

There are no instructions for how to get from today’s 7+ billion down to 500 million people, causing us to wonder what kinds of plans were being made by Turner, Gates, Rockefeller and the others at their secret meeting in 2009.

UNEP, the United Nations Environment Program, quoted an expert in its Global Biodiversity Assessment Report: “A reasonable estimate for an industrialized world society at the present North American material standard of living would be 1 billion. At the more frugal European standard of living, 2 to 3 billion would be possible.”

Some high-profile figures, however, have called for a deliberate attempt by world leaders to kill off large segments of the population. In a 1991 United Nations publication, world famous oceanographer Jacques Cousteau said: “It’s terrible to have to say this: World population must be stabilized, and to do that we must eliminate 350,000 people per day. Prince Philip, royal spouse of Queen Elizabeth, declared his ambition to solve the “population explosion” by being reincarnated as a “particularly deadly virus.” Bertrand Russell, the famous atheist philosopher and humanist leader, celebrated worldwide by population control institutions, provided a careful, reasoned quote to help understand how rational people just might consider eliminating half of humanity.

“I do not pretend that birth control is the only way in which population can be kept from increasing,” wrote Russell in The Impact of Science on Society. “War so far has had no great effect on this increase . . .  perhaps bacteriological war may prove more effective. If a Black Death could be spread throughout the world once in every generation, survivors could procreate freely without making the world too full . . . the state of affairs might be somewhat unpleasant, but what of it? Really high-minded people are indifferent to suffering, especially that of other people’s.” [5]

Bertrand Russell received the Nobel Prize for literature. He was by all accounts a cordial man. And he dressed nicely.

Again, it is difficult for all of us to imagine “nice” people thinking this way, or acting upon it. However, the elite mentality has always been with us, since Plato wrote his Republic 2300 years ago. Every kid studies this book at prep schools like the Gates’s attended. This most famous of Greek philosophers told us that the ruling class are those “whose aim will be to preserve the average of population.” He further stated, “There are many other things which they will have to consider, such as the effects of wars and diseases and any similar agencies, in order as far as this is possible to prevent the State from becoming either too large or too small.”

Plato adds that population control must be done in secret—what you might call a conspiracy. “Now these goings on must be a secret which the rulers only know, or there will be a further danger of our herd… breaking out into rebellion.”

In his 2003 memoirs, David Rockefeller does nothing to dispel the notion that Plato’s Republic is the oligarch’s go-to playbook: “Some even believe we are part of a secret cabal working against the best interests of the United States, characterizing my family and me as ‘internationalists’ and of conspiring with others around the world to build a more integrated global political and economic structure — one world, if you will. If that is the charge, I stand guilty, and I am proud of it.” [6]