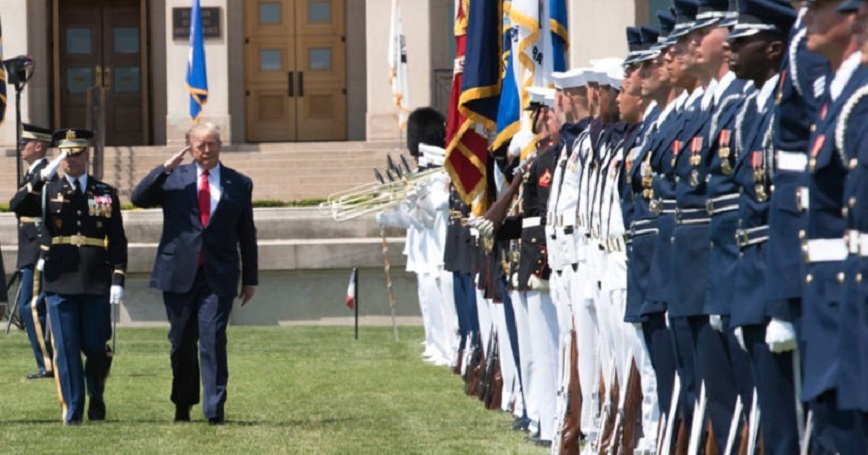 The rift between members of the Senior White House staff is now as public as it is wide, after CNN reported an Oval Office meeting between top Trump staffers, including Trump Campaign Attorney Matt Morgan, Attorney Sidney, Powell and General Michael Flynn, the de-facto leaders of the grassroots movement fighting for election integrity, that allegedly included arguments over a possible voter fraud Special Counsel investigation and martial law to restore election integrity.

Matt Morgan has previously been blamed for the campaign’s lackluster initial handling of the numerous claims of election fraud in the early hours of Wednesday, November 4.

White House Chief of Staff Mark Meadows and White House Counsel Pat Cipollone were present at the meeting and reportedly pushed back against the notion of naming Powell as special counsel to investigate the widespread evidence of mass voter fraud in the 2020 election.

According to CNN, the conversation also included discussions on the possibility of enacting martial law to ensure election security, an idea that General Flynn suggested earlier this week on Newsmax. Some individuals in the room reportedly argued against it.

The idea of enacting an executive order to access and inspect US voting machines was also discussed in the meeting. This could possibly be a reference to President Trump’s 2018 executive order titled Imposing Certain Sanctions in the Event of Foreign Interference in a United States Election.

“I, DONALD J. TRUMP, President of the United States of America, find that the ability of persons located, in whole or in substantial part, outside the United States to interfere in or undermine public confidence in United States elections, including through the unauthorized accessing of election and campaign infrastructure or the covert distribution of propaganda and disinformation, constitutes an unusual and extraordinary threat to the national security and foreign policy of the United States…”

“…In recent years, the proliferation of digital devices and internet-based communications has created significant vulnerabilities and magnified the scope and intensity of the threat of foreign interference, as illustrated in the 2017 Intelligence Community Assessment. I hereby declare a national emergency to deal with this threat.”

These developments arise amid the aftermath of the devastating SolarWinds cyber attack. As the unprecedented breach made its way into public view, DNI John Ratcliffe announced a delay in the release of the official report on foreign election interference due to new intelligence surrounding Chinese operations information:

Gateway Pundit reported that the FBI, Texas Rangers, and US Marshals had allegedly raided SolarWinds headquarters in Austin, Texas, but this has not been confirmed, although John Basham clarified later on Twitter that “They Had A Building Full Of Agents, Rangers, & Deputy Marshals (Primarily FBI Agents).”

Hey @gatewaypundit That “Hannity Guest” Was Me & The Only Correction I Have For Your Article…I Did Not Describe The Investigation In Austin At Solarwinds As A “Raid”, But They Had A Building Full Of Agents, Rangers, & Deputy Marshals (Primarily FBI Agents) https://t.co/BduyE01R3Q

As the joint statement reads, the agencies issued an Emergency Directive which instructed federal civilian agencies “to immediately disconnect or power down affected SolarWinds Orion products from their network” due to exploitation from “malicious actors.”

It has also been confirmed that Dominion Voting Systems uses products from the breached SolarWinds company, specifically, the Serv-U product. Furthermore DVS removed links and references to SolarWinds off their website, as National File reported.

While many mainstream media outlets and some officials, such as Secretary of State Mike Pompeo, have claimed that Russia and/or Russian actors are “believed” to have been behind the SolarWinds breach, National File has reported on questionable financial ties between SolarWinds board members and China.

According to the Washington Post, SolarWinds investors traded a total of $280 million in stock before the official announcement of the breach, raising questions about potential insider trading. Silver Lake sold $158 million in SolarWinds shares six days before the SolarWinds breach was announced.

President Trump suggested that China “may be” behind the SolarWinds breach and that the cyber attack could have impacted US voting machines on Twitter.

President Donald Trump suggested on Twitter that China ‘may be’ responsible for the recently announced SolarWinds cyber attack, adding that “Russia, Russia, Russia is the priority chant” when anything happens, because mainstream media outlets have “financial reasons” to not cover China’s potential involvement.

President Trump also said that the cyber attack could have impacted “our ridiculous voting machines” during the 2020 US election, adding that the election was a “corrupted embarrassment for the USA.”