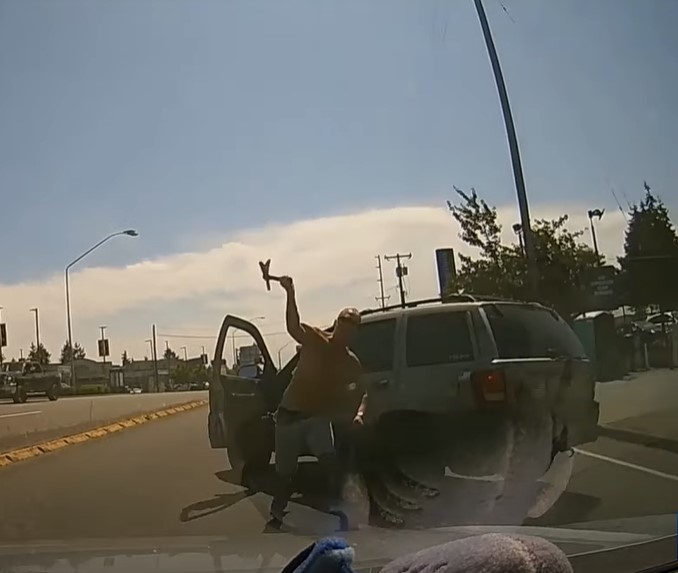 A horrific road rage incident that started with horn-honking and ended in violence was captured in a heart-pounding dashcam video after the driver of a Jeep followed a woman, blocked her escape, and then took a bad situation and made it incredibly worse.

An unnamed 47-year-old driver of a Jeep was captured on camera, launching an attack on a woman near Interstate 5 in the Seattle area on a Tuesday. It all allegedly began with horn-honking while the man and the woman, who would become his victim, were travelling northbound in their vehicles and both merged onto the NE 145th St I-5 ramp in Shoreline, Washington, the Daily Mail reported.

After the driver of the Jeep began honking at the woman as they merged onto the interstate, he continued to follow and honk at the victim. Nervous about an impending road rage incident, the woman took the Ballinger Way exit in Shoreline, hoping to avoid a confrontation on the freeway. Sadly, her efforts were all in vain as dashcam video captured what happened after she was chased off the road:

According to incident reports, the driver of the Jeep followed the woman before eventually passing in front of her vehicle. That’s when things went from bad to worse as the man blocked the road, leaving the woman nowhere to escape as she tried to put her car into reverse. The driver of the Jeep then exited the vehicle, and in one quick move, the shirtless suspect hurled an axe at the other driver.

After smashing the axe against the woman’s windshield, the driver of the Jeep returned to his vehicle, drove over the median, and fled in the opposite direction, but he wouldn’t get far. King County deputies responded to reports of a road rage suspect, and authorities were eventually able to identify the driver of the Jeep from additional surveillance video.

Although the identity of the Jeep driver was not released, the suspect was reportedly arrested three days after the incident and charged with multiple felonies after fleeing Snohomish County deputies. Sadly, it was only after he allegedly struck again, making another victim the target of his uncontrolled rage.

In that incident, the man was accused of yelling at another man in the roadway in Everett just days after the axe incident. According to deputies, the suspect made threats and used specific racial slurs targeted at the victim in the other incident. More on that incident was covered in the report below:

“It turns out a felony warrant was out for his arrest in King County for a robbery,” the Q13 Fox Seattle reporter explained. “Deputies also say that he unloaded his rage onto another victim in Everett,” she added. “Deputies in Snohomish County say the suspect was in the road making specific threats and yelling racial slurs, targeting a victim at this intersection,” she continued, showing the scene of the alleged crime.

A short time later, a theft in progress was reported at a nearby Home Depot. Dispatch said the suspect was seen getting into the same silver Jeep Cherokee. “The suspect was taken into custody at a Seattle park,” Fox News reported, adding that he was “wanted for Felony Hate Crime, Felony Eluding, and Theft, as well as an outstanding Felony warrant for First-Degree Robbery out of King County.”

The footage of the axe incident was released by police with a message: Road rage is real. Fortunately, this man will face the consequences of his actions, thanks to his victim’s dashcam video — but no thanks to Seattle area law that forbids law enforcement from pursuing a vehicle for a hate crime, which is why he was captured sunbathing at a park after engaging in multiple dangerous incidents.

This horrific video footage should serve as an important reminder to us all that we never know who we are sharing the road with. As this footage proves, an unhinged, shirtless driver with a man-bun and an axe to grind — no pun intended — might be behind the wheel of the vehicle next to you. Sadly, monsters like this are among us and we never know what might set them off. Drive safe, my friends.