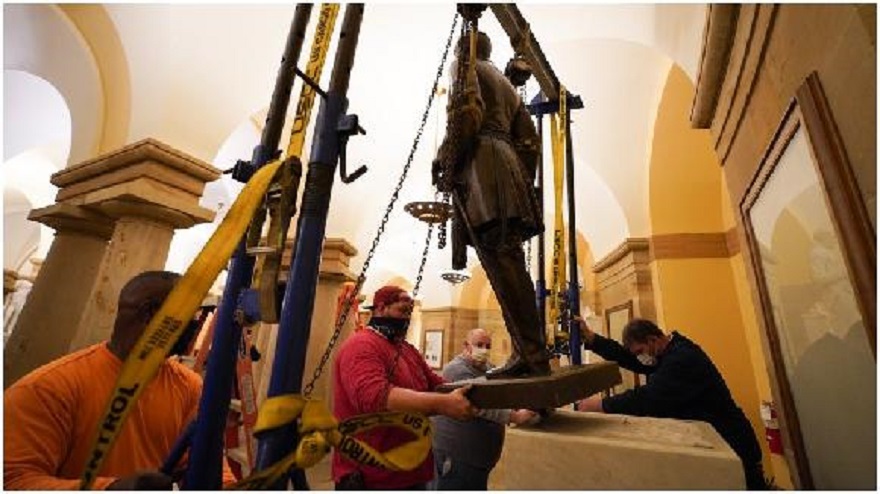 A statue of Confederate Gen. Robert E. Lee was removed from the U.S. Capitol overnight.

The statue has stood with America’s first president, George Washington, as the state of Virginia’s contribution to the National Statuary Hall Collection at the Capitol for more than 100 years.

Virginia Gov. Ralph Northam, a Democrat, announced on Monday the state will seek to have it replaced with a statue of civil rights icon Barbara Johns.

“We should all be proud of this important step forward for our Commonwealth and our country,” Northam said. “The Confederacy is a symbol of Virginia’s racist and divisive history, and it is past time we tell our story with images of perseverance, diversity, and inclusion. I look forward to seeing a trailblazing young woman of color represent Virginia in the U.S. Capitol, where visitors will learn about Barbara Johns’ contributions to America and be empowered to create positive change in their communities just like she did.”

A representative from Northam’s office was present for the removal along with Sen. Tim Kaine (D-Va.) and Rep. Jennifer Wexton (D), who represents a large swath of Northern Virginia in Congress.

“The Congress will continue our work to rid the Capitol of homages to hate, as we fight to end the scourge of racism in our country,” she said in a statement. “There is no room for celebrating the bigotry of the Confederacy in the Capitol or any other place of honor in our country.”

Earlier this year, a state commission recommended the removal of the statue from the Capitol.

“Confederate images do not represent who we are in Virginia, that’s why we voted unanimously to remove this statue,” Lucas said in a statement. “I am thrilled that this day has finally arrived, and I thank Governor Northam and the Commission for their transformative work.”

The statue will be transported to the Virginia Museum of History and Culture in Richmond, Northam’s office said.

Northam’s proposed budget for the state includes $500,000 for the erection of the Johns statue, which must be approved by the General Assembly.

In recent years, social justice activists and some politicians have called for the removal of Confederate statues nationwide, saying they glorify racism and intolerance. The deadly 2017 clash between white supremacists and counterprotesters in Charlottesville, Va., came after a statue of Lee was removed there.

In the wake of George Floyd’s death this summer, calls to remove Confederate statues were renewed. Northam, who was elected in 2017, has said he believes Confederate monuments should be placed in museums rather than displayed in public.