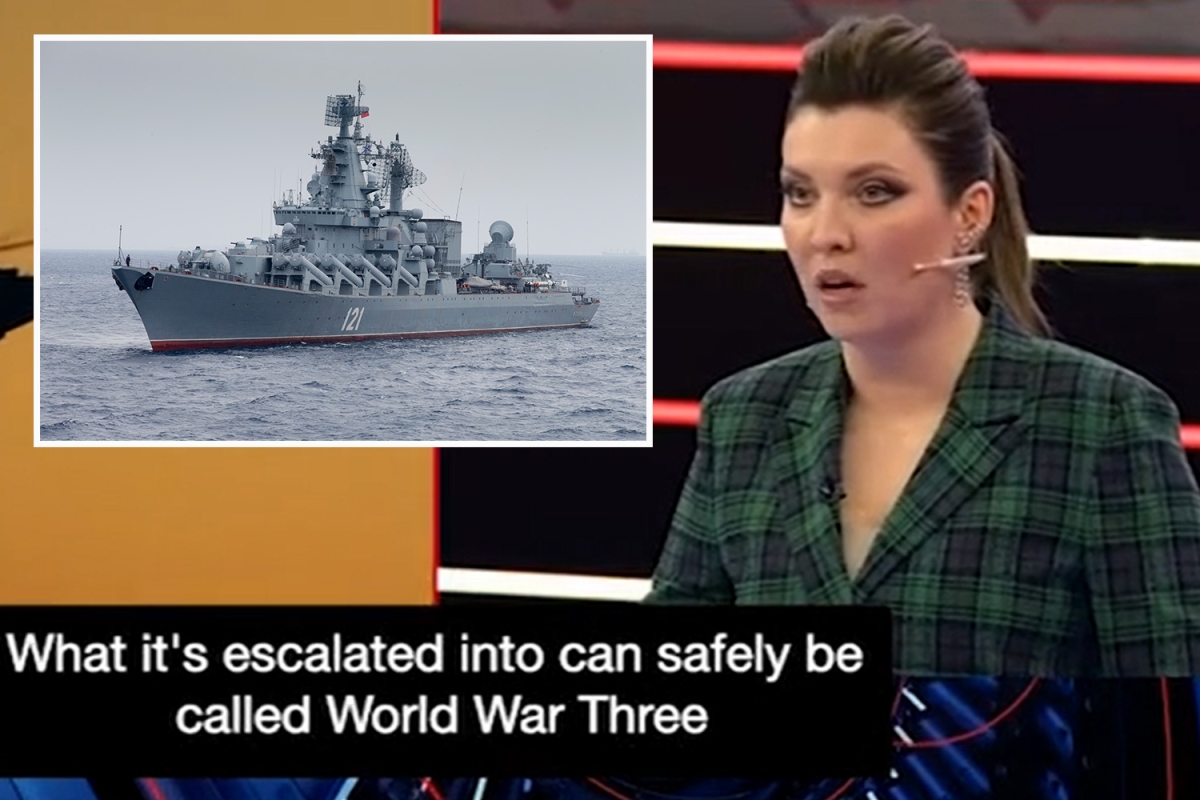 The Russian people are enraged beyond words over the sinking of their Black Sea flagship, the Guided Missile Cruiser “Moskva” and they are already publicly saying on TV that they are in World War 3 with the United States.

The video below shows the sky over Kharkov at about 9:45 pm eastern US time:

On Russian television, the mood was ferocious anger, and the remarks being made were specific: Russia is already in World War 3, Russia is at war with the United States/NATO, and more.   Here’s a small sample:

One source familiar with the unfolding events, told me the following:

The cruiser sank.
There were many victims on board. There was a monstrous explosion of ammunition and airborne missiles.
I think there may be several hundred dead, if not almost the entire crew.
So there will be a backlash.

That same source then SPECULATED what he believes the Russian response will be:

The RF Armed Forces will hit Bankovaya, the Ukrainian Defense Ministry, the GUR building and other facilities in Kyiv.
In addition, a strike on the Baltic states or arms convoys in Poland or the Czech Republic is possible.
There will be strikes by the RF Armed Forces on bridges along the western border of Ukraine, on bridges in Kyiv, on bridges across the Dnieper.
There will be strikes on railway bridges in Western Ukraine and on transport hubs and interchanges, on junction stations, and so on.
There will be strikes on the barracks and control centers. Blows are prepared from all trunks. They will strike from the Caspian, from the Black Sea, from the Crimea, even from the Baltic and from Kaliningrad. There will be shelling by Belarusian artillery and Belarusian rockets.
The strike will be three waves, massive volleys, there will be up to a thousand missiles at the same time.
Heavy artillery, RSZO. In the Kiev region, Kiev, Kharkov, Nikolaev.

He wrapped-up his speculation by telling me:

This story is still developing, check back for updates.

Russian Defense: We will increase the number and size of missile attacks on Kiev.

Russian Defense: More than 30 Polish mercenaries were killed in Kharkov.

Among the prisoners in Ukraine there are military personnel of NATO countries, said Senator Klimov of the Russian Federation Council

“We already have prisoners among the military personnel of NATO countries, we will show all this when we conduct trials, and the whole world will see what really happened,” he said

The United States has received an official Diplomatic demarche (note) from Moscow which says, in sum and in substance “Russia demands the United States stop arming Ukraine”  and then threatens “unpredictable consequences” if such arming of Ukraine continues.

This is stated in an official diplomatic note from Moscow.