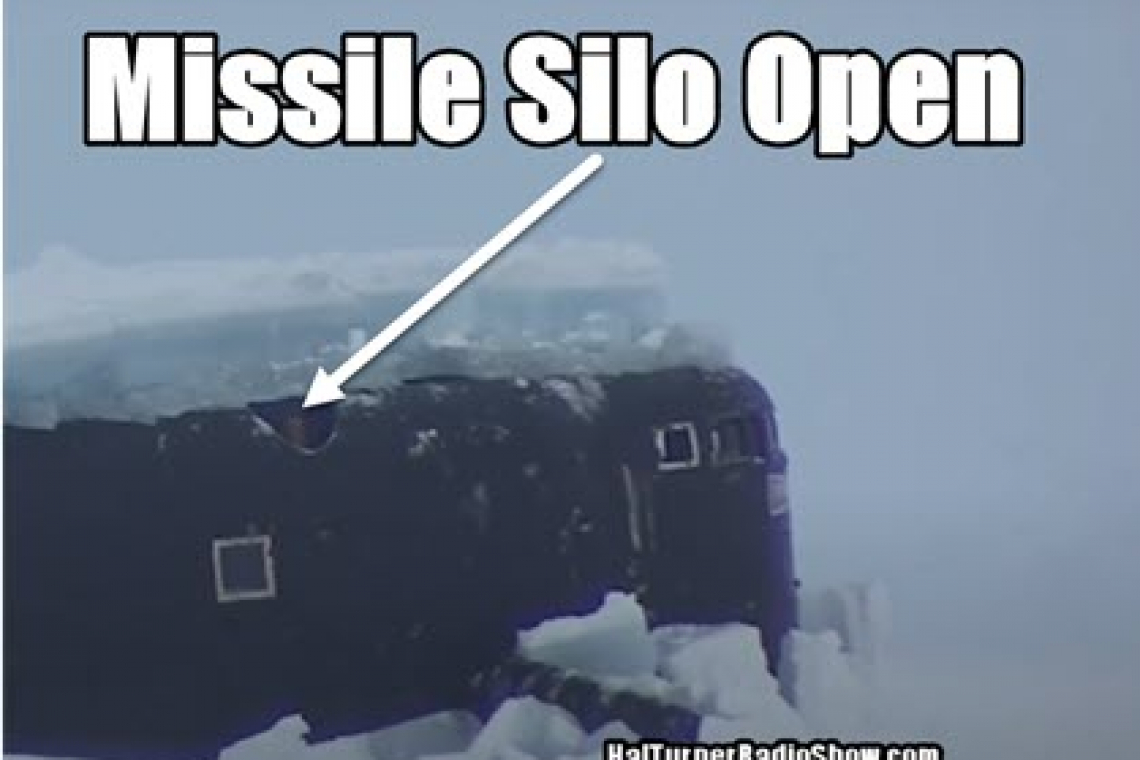 With tensions around the world ratcheting-up to beyond even the level of the former “Cold War” in places like Ukraine and in the Middle East (Syria), today, Russia sent the United States an unmistakable warning about where this is heading . . . nuclear war.

Today, for the first time in recorded human history, THREE (3) Nuclear Ballistic Missile Submarines from the Russian Navy, suddenly surfaced through the Arctic ice, and OPENED their missile silos!

Not only did these vessels surface unexpectedly through the ice, they opened at least one Missile Silo:

Side view with Silo Open and red-tip of missile visible:

“As part of the Arctic expedition, three nuclear-powered submarines surfaced from under the ice inside an area with a radius of 300 meters for the first time in the history of the Russian navy,” said Admiral Nikolay Evmenov in a direct video-call with President Vladimir Putin in Moscow.

Evmenov is Commander of the navy.

The submarines conducted this exercise in Russia territory within the Arctic Circle in a place called “Franz Josef Land” a small archipelago northeast of Norway and Finland shown on the map below.

This location is **** NOT **** routinely monitored by defense satellites for missile launches.  Normally, the land-based missile silos within Russia are where spy satellites regularly watch for the heat signature of a missile coming out of a silo.

This type of brutally blunt nuclear warning from one super power to another has really never taken place before.

It is an indicator of just how serious things are getting out in the real world.

Yet the mass media pays little to no attention to what’s going on, and is doing NOTHING to warn the general public to be prepared for something terrible.

The media has not reported to the people of Europe or of the USA, that Ukraine has massed more than ninety thousand troops with 450 tanks and 800 pieces of artillery, on the border of two breakaway states, Luhansk and Donetsk, Ukraine.

The people in those states have voted to leave Ukraine and join Russia.  Ukraine forbids it and has put military troops on war alert to attack the two states and take them by force.

The media is also not reporting that Ukraine has issued an ORDER to its military, to re-take by “hybrid warfare” the peninsula of Crimea.  In 2014, Crimea voted to leave Ukraine and rejoining Russia, where it was home for 300 years prior to then-Soviet Leader Nikita Kruschev “giving” the peninsula to Ukraine in 1954.

The media is also not reporting that NATO has moved 28,000 troops, 18 warships, and shiploads of M1 Abrams Tanks and tons of Ammunition to Europe to use once the war get started between Russia and Ukraine.

The media is also not reporting that Russian tanks are moving through the streets of Grodno, Belarus to the borders of Poland and Lithuania to engage NATO forces once war breaks out with Ukraine.

The media is not reporting the USA ran nuclear attack drills against Russia via B-52’s we sent over the North Pole this week.

The media is not reporting that US military convoys are bringing troops, weapons, tanks, artillery and more BACK INTO SYRIA since Joe Biden became President, or that the US is STEALING $30 Million a month in oil from inside Syria!

The media is not reporting that Russia has begun BOMBING the oil smuggling tanker trucks and oil smuggling storage depots inside Syria, and these missile attacks by Russian forces are landing in smuggling areas where US military bases are located in Syria.

The US wants the missile strikes to be kept quiet because they don’t want the general public knowing they’re stealing $30 Million a month in someone else’s oil and now are getting hit with missiles to stop the theft!

Now, we have Russia sending an unmistakable signal to the west by surfacing-thru-Arctic-Ice, three nuclear missile submarines.

We are being warned.  Knock it off.

But it seems nobody is listening.

Here is VIDEO from the Russia Defense Ministry showing what they did today at the Arctic Circle.  Maybe YOU might listen to the warning being sent by these images, because nobody in government seems to be listening.

Do not look at the bright, white, flash, that the Democrats are arranging for many of us through their incompetence, and illegitimate President, Joe Biden.

None of this crap took place under Trump.  Here we are two months into an illegitimate Biden Presidency, a Presidency begotten through rampant and brazen election fraud on November 3, 2020, rubber-stamped by Congress on January 6, 2021, and ignored by the courts, and now nuclear threats are now going back and forth.

This does not bode well for our future.