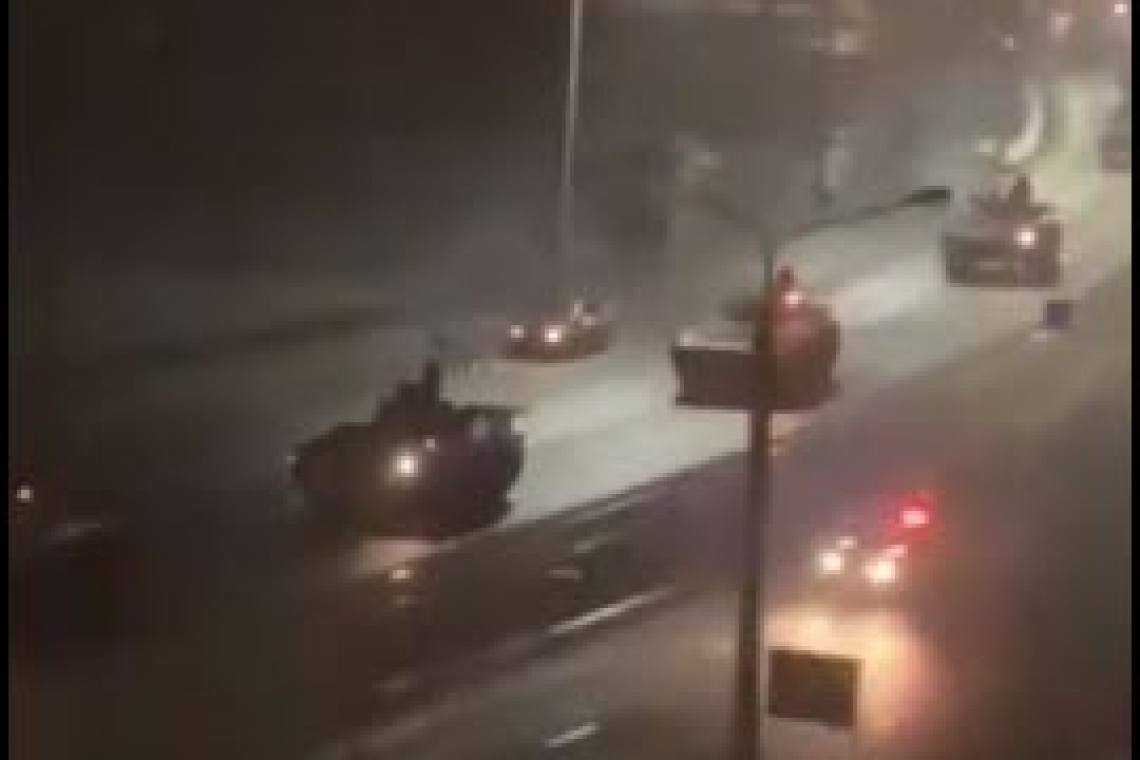 UPDATED 10:16 PM EDT (SEE BOTTOM) — Tanks and other heavy armor is now on-the-move in Grodno, Belarus, moving toward the borders of Poland and Lithuania.  These tanks are on city streets moving in the open!

For what it’s worth, this is not a small deployment.

The video below shows only part of what was moving and we can report tonight that the entire country of Belarus only HAS 2 Mechanized Divisions and they’ve sent BOTH; about 30,000 troops.

It is also important to report that Belarus EJECTED the Polish Ambassador from their country today.

Below is a scalable map showing the location of Grodno, Belarus.  Note how close it is to the borders of both Poland and of Lithuania.

Belarus as a nation has close ties and great relations with Russia.  Thus, that these tanks are moving toward the border of NATO members Poland and Lithuania, is quite an explicit message to NATO.

Clearly, the deteriorating situation in Ukraine is set to explode with direct conflict between Ukraine and Russia, while the mass media in both the USA and in Europe has completely ignored the development of ACTUAL WAR.

Today’s move of armor is obviously making sure that NATO reinforcements cannot come into the coming Ukraine conflict from Poland and Lithuania.

Think about that for a moment;  how big is this war going to be that Belarus is already moving troops to block Poland and Lithuania?

This is going to be a very big war . . . and all because the people of Luhansk and Donetsk oblasts (states) in Ukraine, want to leave Ukraine and join Russia.

Ukraine says they can’t leave, and has massed 90,000 troops 450 tanks, 800 pieces of artillery and more, on the borders of the two oblasts.

Russia has said publicly that it will defend the people of Luhansk and Donetsk of the Ukrainian Army attacks.

For weeks, NATO has moving troops, planes, tanks, and more into the region . . . (for what they call an “Exercise”) that just happens to be in the perfect place to launch military attacks against Russia.

There’s a real war brewing on the continent of Europe and when it breaks out (likely within days) the entire population of Europe and the USA will be blindsided and afraid.

There is way too much mass of steel and young men with guns and missiles, way too close together for my comfort.

I’m also wondering how Lavrov’s talks with the Chicoms are coming along.

It would appear that at the very least the Chicoms are neutral in whatever’s going on and that should concern everyone.

None of this nonsense took place while Donald Trump was President.  What the world is seeing now is resumption of the troubles created during the Obama regime, being started again by the incompetent and illegitimate regime of Joe Biden, who gained office via election fraud.

The incompetence of the Biden regime is going to get a lot of people killed very soon; and NONE of it had to be.

Ukraine’s response was almost immediate. Anti-aircraft systems were transferred to the border with Belarus due to “danger”.

In particular, an anti-aircraft regiment from Lviv “Hetman Vyhovsky” was transferred to the northwestern border of Ukraine, near the border with Belarus.

Ukrainian media report that this was done due to danger from Belarus. Earlier, the President of Belarus had proposed to Moscow to organize joint patrols on the Belarusian-Ukrainian border due to the new dangers posed by Kiev!

Sources in Kiev say ground forces may also need to be sent to the border with Belarus.

Joint Russian-Belarusian exercises in Mogilev, Belarus have just been hastily announced to start . . . (ahem) . . .”immediately” with paratroopers of the 234th Russian Regiment and the 103rd Belarusian Brigade.

The map below shows the route from Mogilev, Belarus to Kiev, Ukraine:

The US Merchant vessel “Ocean Glory” is now unloading a cargo of lethal weapons at the port of Odessa in Ukraine.  The vessel transited the Bosporus Strait earlier today as shown in the photo below, and is helping the government of Ukraine prepare to ATTACK citizens of Donetsk and Luhansk, possibly sparking a direct war with Russia at the same time.

The USA is neck deep in the pending troubles in Ukraine, because our ILLEGITIMATE President, Joe Biden, and his IMBECILE administration, have no idea they’re starting an actual war through their meddling.

Gotta say man, I’m getting able archer vibes here except this time we’re the ones with dangerously incompetent leaders.

There is way too much mass of steel and young men with guns and missiles way too close together for my comfort.

I’m also wondering how lavrov’s talks with the chicoms are coming along.

It would appear that at the very least the chicoms are neutral in whatever’s going on and that should concern everyone.