Russians Pursue and “STOP” U.S. Troops in Syria, Ask “By What Authority are you here?” 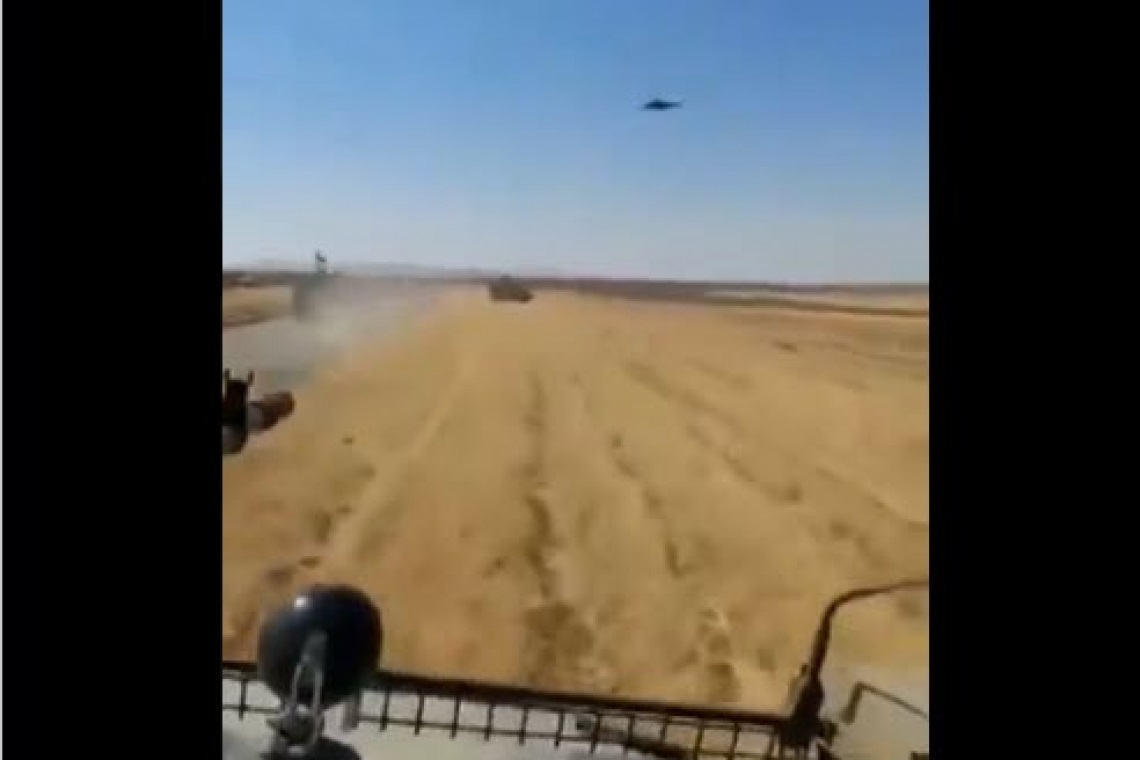 Russian Army troops have begun actively pursuing, stopping, and questioning US Troops inside Syria. The Russian are using APC’s in pursuits, backed up by attack helicopters.

One such pursuit in the desert of Syria is recorded on video below.

Once the American troops are pulled-over, the Russian officer says “This is the territory of the Syrian Arab Republic. The Russian armed forces are here at the invitation of Bashar al-Assad. On what basis are you here? “

In the particular pursuit shown below, Americans _seem_ to try fleeing across unpaved areas then return to the road.  That didn’t last long as Russian troops radioed for another vehicle to physically block the US Army vehicles once they got on a road.

While this is taking place, a Russian attack helicopter joined the fray making sure the Russians had ample firepower to directly confront the Americans.

So, what did the Americans say when asked “On what basis are you here?”   That info is not known.  And well it wouldn’t be, because the American military has no authority whatsoever to be inside Syria.

You know, it HAD to come to this sooner or later.

These two political dingbats bought into the idea they could overthrow the democratically elected President of Syria, Bashar Assad, install a government favorable to America, and get a natural gas pipeline from Qatar run through Syria, which President Assad refused to allow.

It started going bad for Obama and Clinton when the illegal arms-smuggling operation being run from the US Embassy in Benghazi, got attacked and Ambassador Stevens and others got killed.  The US was using the Embassy in Benghazi to supply arms to the Al-Qaida and ISIS mercenaries they were using to overthrow the Syrian Government.

When the Embassy attack was in progress, US forces in the area were ordered to “stand-down” and not provide assistance.  For Obama and Clinton, sending in help would reveal the arms smuggling being done there – and they couldn’t have THAT; so they let the Ambassador and others be attacked and killed by refusing to send help!

Congress held big hearings, at which Hillary Clinton famously said “People died, at this point, what difference does it make?”  Of course, she was referring to us little people, who she seems to regard as canon fodder for her psychotic-like political schemes.

Ultimately, Congress never bothered asking about the arms-smuggling taking place at the Embassy and the hearings amounted to nothing. The whole thing got shoved under a rug.

The effort to overthrow Assad continued to the point where Assad had to go to Moscow and ask Russia to enter Syria to defend it from the outside forces trying to overthrow the government.  Russia agreed and sent troops.

The Russians immediately affected the effort to overthrow Assad, smashing and destroying the mercenaries hired, trained, funded and equipped by the US, UK, France, Qatar, Bahrain, Saudi Arabia and others.  This really put a hurt on the Obama-Clinton efforts to overthrow Syria.

Fast forward to the November 2016 presidential election, Hillary was _supposed_ to win.  Had she won, the Syria operation would have been stepped-up.  She didn’t win.  That threw a major monkey wrench into the ongoing troubles in Syria.

With the Presidency of Donald Trump, American efforts in Syria ground to a halt and the Russian Army made fast work of most of the mercenaries.  Vast geographic areas of Syria were reclaimed under the lawful governance of the Syrian Arab Republic.

Of course, Turkey, like a Hyena seeing easy prey, entered Syria with its troops and complicated everything for everyone.

The Democrats and their minions in the media, bogged-down the Trump Presidency with all sorts of manufactured scandals but stunningly, they went so far as to outright LIE to President Trump about troop levels inside Syria.   It wasn’t until Trump was out of office (thanks to a STOLEN election) they openly admitted to deliberately misleading him about troop levels in Syria.

Enter illegitimate President, Joe Biden.  A man so addled with dementia, he likely doesn’t know where he is from time to time.  He’s the perfect guy to hold out as “President” while behind the scenes, other people with other agendas are issuing all the orders.

And what orders have they been giving?   Just DAYS after Biden became “president” US military convoys started pouring back into Syria.   Trouble was brewing there all over again.

This time, though, Russia wouldn’t put up with it.

Slowly, the Russians went about their efforts against the remaining mercenaries, but left the US alone.  Just this year, Russia began bombing Syrian oil storage facilities from which the US, UK, France and Israel have been stealing tens of millions of dollars worth of oil every month.

The US didn’t take the hint to stop stealing the oil; they rebuilt what was bombed.  So Russia bombed them again.  The retards decided to remain nonetheless.

While all of this was going on, the Democrat congress continued to poison relations with Russia through sanctions, enacted based on lies, and a public relations machine that went after Russia relentlessly.  It has gotten so bad, that the Russian Foreign Ministry actually described its relations with the United States as being “dead.”

Then Ukraine got active again.  Joe Biden, who criminally extorted Ukraine into firing a state Prosecutor who was then investigating a company his son, Hunter, was involved with, is now President and all of a sudden, Ukraine troops are massing where?  The border of Russia.  100,000 troops massed on each side.

Every step the Democrats take is designed to create a confrontation with Russia.  It’s almost as if they WANT an actual war.

Which brings us to today.  Russian armed forces have now directly confronted US armed forces inside Syria and asked the simple question “By what authority are you here?”

The armed forces of the United States do not have any authority at all to be in Syria.  There’s been no Declaration of War by Congress.

No matter how one looks at this, it isn’t good.

The US just got it’s shoulder poked by the Russian Army.  Let’s see what the dingbats in the federal government do next.  My bet is, they’ll do yet another stupid thing and maybe even start a war.

People die in wars.  Sometimes, those behind the scenes who start those wars, are the ones who get killed.

I tell you this because I see a sword coming against our nation. Fast.  Because wicked men are doing evil things, and doing so in OUR NAME, with government power.  They should turn from their wicked ways to avoid the coming troubles they are creating.

I am blowing a trumpet of warning.