Santa’s on his way! Saint Nick masks-up as NORAD begins tracking him flying his sleigh delivering presents during pandemic 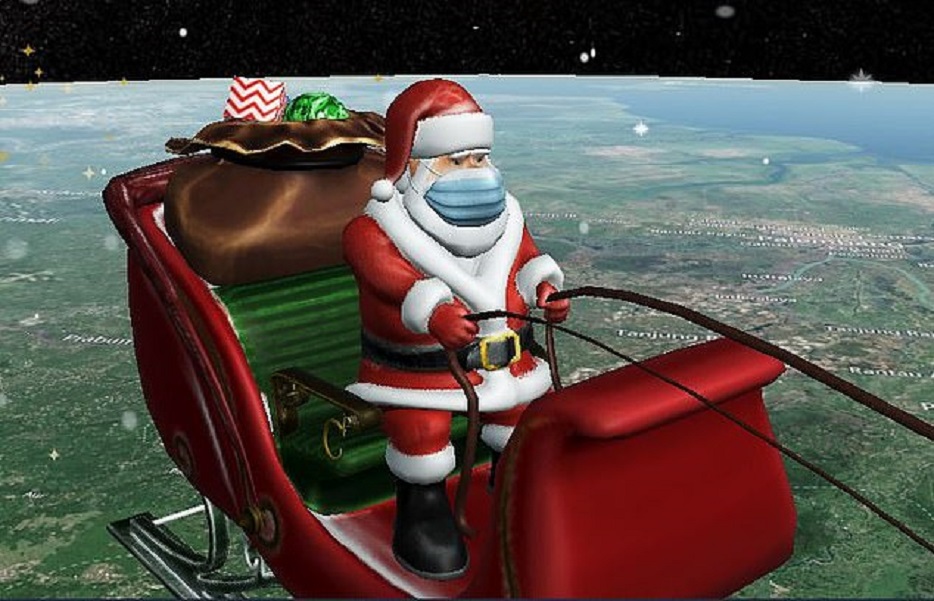 Santa has been spotted on NORAD’s tracker wearing a mask as he flies over Australia delivering presents to all the boys and girls who made it on the good list this year.

Father Christmas set off from the North Pole and took to the skies early Christmas Eve with his sleigh laden full of gifts for children all over the world.

One of his first stops was Russia and he then headed on to Australia, the Marshall Islands, New Zealand and China.

By 10:30a.m. ET, the main man was flying back over Australia to Perth and was on his way to Christmas Island. He had clearly been working hard having already delivered over 1.5 billion presents.

So far he is on schedule to arrive in the US between 9 p.m. and midnight Christmas Eve.

If you want to make sure you’re tucked up asleep when Santa comes down the chimney, you can track his whereabouts on the official North American Aerospace Defence Command (NORAD) Santa Tracker.

Since 1955, the agency has been tracking Santa’s whereabouts on Christmas Eve using its satellites and radar.

For the rest of the year, NORAD is responsible for protecting America’s planes and airspace but, every Christmas Eve for the last 65 years, it puts its important work on hold for another matter of global importance – that Santa safely delivers all his presents on time. ‘

‘The same assets we use in our aerospace warning and aerospace control missions 24/7/365 are used on Dec. 24 to track and escort [Santa],’ the agency tweeted Thursday.

NORAD activated the tracker Thursday morning just as Santa waved goodbye to his elves at his toy workshop and set off wearing his mask to prevent the spread of COVID-19.

The agency reported ‘good weather for flying’ as he jumped up on his sleigh before making one of his first stops in Provideniya, Russia.

Santa then enjoyed some warmer weather over the Marshall Islands and Samoa, where he mistook the famous Alofaaga Blowholes, where sea water funnels through the rock and shoots upwards into the sky, for snow shooting upward, Norad reported.

Next up was New Zealand before he made a special stop at the International Space Station for the first time this year after the FAA issued him a ‘special commercial space license’.

Santa used his StarSleigh-1 space capsule powered by the Rudolph Rocket to make the detour to give the astronauts on the space station their presents.

Fiji and the Solomon Islands were next to get their stockings filled before it was back to the colder climes, with a stop in Yakutsk, Russia, and a hot cup of cocoa to set him back on his way.

Santa headed back south again and was sighted flying over the Sydney Opera House before he was on to Japan, the Philippines and China.

There’s no shortage of fuel to keep Father Christmas’s energy levels up as he enjoyed more than one billion cookies left out for him by children in China.

He delivered presents to sleeping boys and girls Wuhan at around 10 a.m. ET.

Santa received his COVID-19 vaccine this week to make sure he can visit homes safely this year.

He was also granted special clearance to travel as an essential worker on the biggest day of the festive season.

Dr. Anthony Fauci reassured children Saturday during a Sesame Street special with CNN that he had personally vaccinated Mr. Claus ahead of Christmas Day.