Schoolboy, 14, posts smug SELFIE from cop car after he is arrested for murdering cheerleader classmate, 13, whose body was found in Florida woods 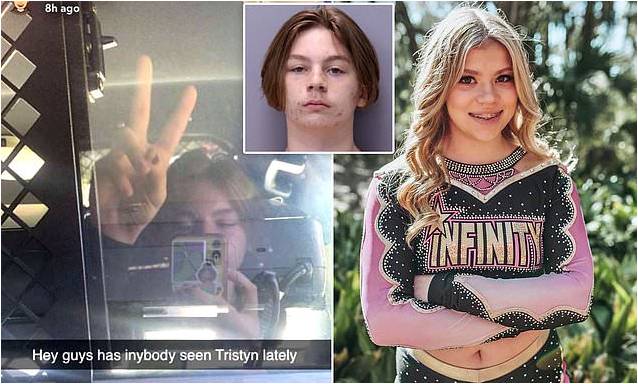 A fourteen-year-old boy has been charged with murdering a 13-year-old Florida cheerleader whose body was found in woods on Sunday night, less than 12 hours after she was reported missing.

Aiden Fucci, 14, has been named by police as the suspect in the killing of 13-year-old Tristyn Bailey.

On Sunday night, he took a selfie in the back of a cop car which he then posted on Snapchat with the caption ‘hey guys has anybody seen Tristyn lately’.

Police confirmed to News Jax, a local site in Jacksonville, that the selfie was part of their investigation.

He has been taken into custody on second-degree murder charges but prosecutors have not yet decided if he will be charged as a juvenile or adult.

Tristyn’s body was found in woods near Fucci’s home on Sunday night, less than 12 hours after her family reported her missing. It’s unclear how she died but police say her body was found fully clothed – she was wearing a dark top and white cheer skirt.

Aiden Fucci, 14, has been named by police as the suspect in the killing of 13-year-old Tristyn Bailey (pictured) whose body was found on  Monday

NewsJax, a local site, cites police sources who say this selfie which Fucci took in the back of a squad car is part of the investigation. He posted it on Snapchat after her death

She was last seen at 1.12am on Sunday, and was reported missing at 10am. She and Aiden were classmates at Patriot Oaks Academy.

‘We have arrested a suspect by the name of Aiden Fucci, 14 year old. He is currently in custody charged with second degree murder.

‘This is a long process, we’re in the very early stages of this.

‘The suspect is in custody – there are no further threats to this case,’ St. Johns County Sheriff Robert Hardwick said at a press conference on Monday morning.

Police have not shared any more information about the kids, including what they were doing on Saturday night before Tristyn vanished.

After she was reported missing, dozens of local volunteers joined in the search for her.

The man who found her body was one of them – police say he’d seen on the news that she was missing and went out to look for her.

She was last seen at the Durbin Amenity Center in St John’s at 1.15am. It’s unclear what she was doing there or if Aiden was with her.

The center has an outdoor pool and tennis courts. It is next to a lake and there are woods nearby.

In a statement on Monday afternoon, a spokesman for the state’s attorney’s office said: ‘As Sheriff Hardwick stated in his press conference today, our office will continue to investigate the case to determine both the appropriate charges going forward, and whether or not (Fucci) will be charged as an adult.’