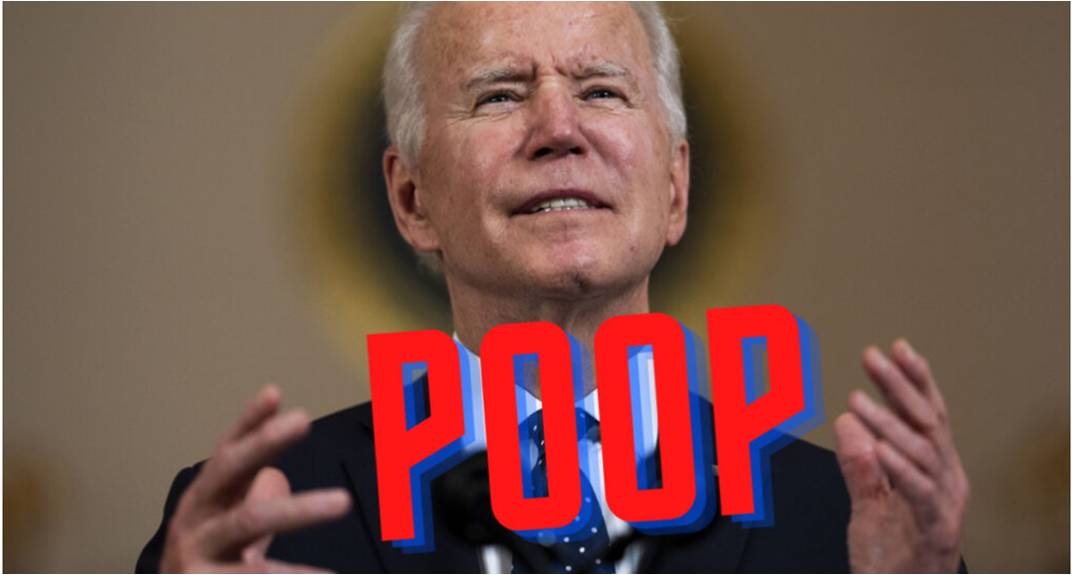 Not only is Biden incompetent, he is also incontinent. Al3x J shares damning new intel on Biden and his worsening dementia.

“Biden doesn’t know who he is at 3 am at night and roams around the White House, yelling at people and not knowing who he is and defecating on himself.”

Alex Jones just dropped some crazy information about Joe Biden crapping his pants, roaming the halls of the White House, not knowing who he is at 3 am and being injected with all sorts of drugs.

We’re not sure if it’s true or not, but at this point, is there anything that would surprise you after what we’ve seen the past few years?

You can see what Alex says here:

“I’ve got these notes right here that I’m going to go over. I mean, I know what hotels he was in on a winning crapped his pants. I know when they removed him. He was ever having to have a doctor with a giant Pelican case of drugs. He’s running around the White House at 3 am, not knowing who he is. So this is all the information. Remember, it was the Secret Service. They told us back in 2016, two months before the election, they said, you just got to follow him in the ambulance that follows Hillary.” – Alex Jones

“We had conversations with individuals, let’s just say on Biden’s detail on September 10, September 11th, inside the Secret Service, and I’m gonna leave it at that. And they confirmed to us that they’re really concerned about the country and that the people controlling Biden are basically Communist Chinese agents. And this is directly from the Secret Service inside the White House and the details separately. And that Biden, when he said, I just got my butt wiped, it’s true. He’s defecating all over himself because he has dementia, and they follow him around with a whole Pelican case that’s about two feet long and about a foot wide, full of drugs he’s on that he’s injected with, and that Biden doesn’t know who he is at 3 am at night and roams around the White House, yelling at people and not knowing who he is and defecating on himself. And then when he was in New Jersey, to survey some of the damage there on the 10th, that he had to change clothes, repeatedly, because he kept defecating himself, you can see those days he did this. And this is a very sad thing. They put this puppet in, so they can commit all these crimes, destroy the border, bankrupt the dollar, launch all these wars, engage in all these crimes, and then basically it will be seen as America doing it. That’s the globalist model.

So I have all that news directly from the Secret Service that they’re just the foundries in total peril. Biden is completely off his mind, out of his mind on drugs. Just like JFK, he’s being injected with pharmaceutical-grade methamphetamine. He could die at any moment. Then we have massive, massive news that I’m going to cover the last segment today. I actually was able to write notes when these individuals gave us information to me. Two different individuals. And I’m just going to leave it at that, but involved in the White House and involved in his protective detail when he was in New Jersey surveying the flood damage from the hurricane and then on the 911 ceremonies, much of which we saw him running around unknowingly was acting weird. Just incredible information about him defecating on himself constantly and not knowing who he is in the White House at night. They’re really scared. He is completely out of his mind. That’s why they cut his mic off. He’s definitely setting America for a fall. Then they’ll blame him and blame America when it’s literal, triple agents, global Chicom New World Order agents. Some of them are Islamic agents. I mean, it’s a consortium like a Legion of Doom of all these America haters. They’re in control of Biden right now. We’re literally seeing the end of America.” – Alex Jones

I’ve got these notes right here that I’m going to go over. I mean, I know what hotels he was in on a winning crapped his pants. I know when they removed him. They have a doctor with a giant Pelican case of drugs. He’s running around the White House at 3 am, not knowing who he is. So this is all the information going. Remember it was the Secret Service that told us back in 2016, two months before the election, they said you just got to follow him in the ambulance that follows Hillary. And soo here we have the Secret Service are nice. And I’m not gonna say much more than that, but I mean, the people on his detail, and the people in the White House. And this is 100% confirmed on my children, folks. Like we told you, Hillary, and it happened two weeks later. This is all going on. They told us that he just likes to crap his pants, and then he likes the staff cleaning it off of him. And that he refuses to wear diapers. And I’m gonna do a whole report on this. I’ve got notes. I’ve got everything. I met with these people. I mean, this is gonna cause a huge deal and that they don’t care anymore. In fact, they’re probably going to just start going public that Biden runs around at two-three in the morning speed bombed out of his head that the doctor has a huge Pelican case with all these drugs in it.

They’re injecting him with stuff. And then, like you saw him, in fact, let’s play the clip in a moment where he says they wipe my butt, they wipe my butt, they wipe my butt. He literally, people have dementia, get into their butt and into pooping snd into writing on the walls with it. He hasn’t gotten to the writing on the walls yet, but he’s obsessed with his poop. And if they make him mad, he’ll just start defecating all over himself. He throws temper tantrums. So this is directly going on, and you can see how they kept changing his clothes. On September 10th was a particular day where they believe he crapped his pants multiple times. Okay, so we’ve got all this information for you here he is talking about a month ago about getting his butt wiped.” – Alex Jones

Here’s a video of one of the events Alex mentioned where Joe got heckled while surveying storm damage: