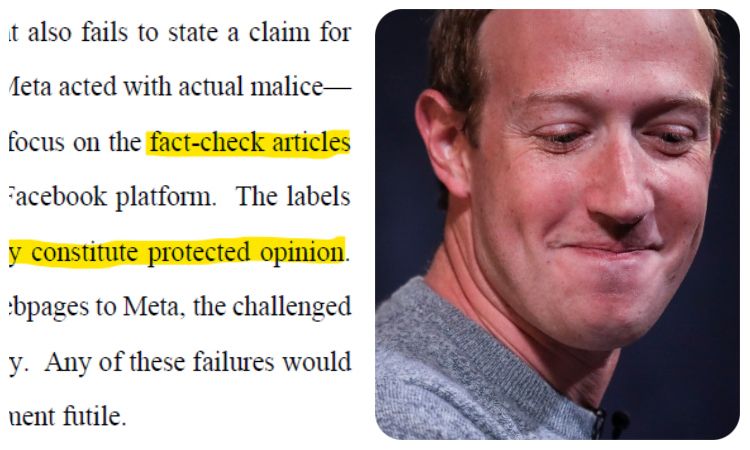 Back in September, news broke out that former TV journalist John Stossel has reportedly filed a lawsuit against Facebook seeking at least $2 million in damages, alleging that the company defamed him by adding “fact-check” labels to two videos he posted related to climate change. After Facebook’s labels, the lawsuit claims “his viewership plummeted due to both Facebook’s censorship and the reputational harm caused by the false labels.”

Variety reports that former TV journalist John Stossel is suing tech giant Facebook for defamation, seeking at least $2 million in damages after Facebook added fact-checking labels to two videos Stossel posted relating to climate change. A Facebook spokesperson told Variety in a statement: “We believe this case is without merit and we will defend ourselves vigorously against the allegations.”

Maybe the most important stuff from this lawsuit is the fact that Facebook has admitted in a court of law that such fact checks are not factual at all, but merely opinions.

Surprisingly little attention is being paid to a bombshell admission made by the attorneys representing the corporation formerly known as Facebook, Inc., which has now transitioned into Meta Platforms, Inc.

In its response to Stossel’s defamation claim, Facebook responds on Page 2, Line 8 in the court document (download it below) that Facebook cannot be sued for defamation (which is making a false and harmful assertion) because its ‘fact checks’ are mere statements of opinion rather than factual assertions.

“The labels themselves are neither false nor defamatory; to the contrary, they constitute protected opinion.”

Image from the lawsuit below:

Meta’s attorneys come from the white-shoe law firm Wilmer Cutler Pickering Hale and Dore, with over a thousand attorneys and more than a billion dollars a year in revenue. They obviously checked out the implications of the matter for Section 230 issues, the legal protection Facebook/Meta have from liability for what is posted on their site. But at a minimum, this is a public relations disaster, revealing that their “fact checks” are not factual at all and should be labeled as “our opinion” or some such language avoiding the word “fact.”

Below is the court filing:

So are they using “fact-checking” to cover up the censorship of opinions that differ from those of the powerful Silicon Valley oligarchy.