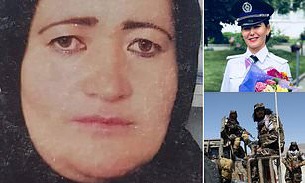 An 8-month pregnant mother has been executed by Taliban terrorists in her own home during new door-to-door executions in Afghanistan, according to reports.

Witnesses say Banu Negar was shot dead in front of her husband and child by a group of Taliban militants.

Negar, who worked in the local prison, was executed at her home in Firozkoh, the capital of central Ghor province, amid increasing violence following President Biden’s botched withdrawal of U.S. troops.

Speaking to the BBC, the Taliban promised to “investigate” the incident.

“We are aware of the incident and I am confirming that the Taliban have not killed her, our investigation is ongoing,” Spokesman Zabiullah Mujaheed said.

Dailymail.co.uk reports: He added the Taliban has announced an amnesty for people who worked for the former administration.

Mujaheed said her death was caused by ‘personal enmity or something else’.

Three gunmen arrived at the house and searched it before tying members of the family up and carrying out the killing.

Pictures have circulated online showing blood spattered walls in the house and her disfigured corpse.

The Taliban have been trying to project a more tolerant and moderate image of themselves since seizing power.

But a number of incidents of horrific violence have been reported in Afghanistan under the repressive regime.

Fighters have been seen going door to door hunting former members of the Afghan security forces and Western allies.